Buxify.co is another scam site, claims to be #1 influencer network and to pay the users a large amount of money for barely doing nothing. It also claims to have over 225,000 members and paid out $68 million so far - none of it is true. The website was only first created in October 2019, initially named it "Buckify" by the looks of it and made up fake payment proofs with that name, then changed the site name to Buxify. The following Buxify review will explain how this site unethically deceits users to make affiliate commissions by selling personal data.

Buxify calls itself an influencer network. But if you have been on social media for a while and know what an influencer means, you know Buxify is clearly not such a network because the site has no quality that sells.

Buxify is partnered with fake advertising agents. Their notorious aim is to get as many people to sign up and complete as many "tasks" including fake surveys and prize competitions. Users are required to give out all their personal information (full name, email, street address, phone number, gender and date of birth) every time they complete a task. With this way;

Now Buxify claims to pay users $50 each time they complete a task. Of course, the claim is totally false. The whole system is too good to be true; Buxify only receives $1-$2 from the ad agency. How can it pay $50? It's impossible.

What Buxify will do is tremendously simple - it just won't pay. When a user sends a withdrawal request, Buxify will simply ignore it. It won't respond to any of the users' emails, but will block their access instead and eventually shut down the site. 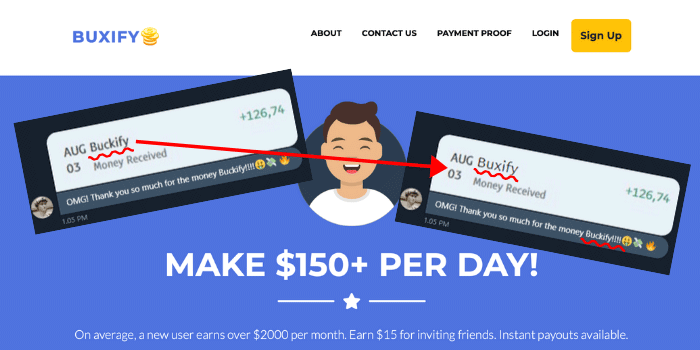 What Are The False Promises? 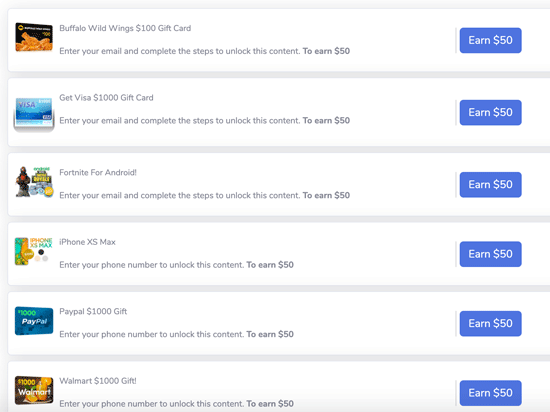 It is clear that the scammer is targeting naïve new users who believe that there may be such a magical way to make money online. To make it look authentic to them, when a new user signs up, the first thing it asks is how they want to get paid - via PayPal, CashApp, by Bitcoin or by check. But there is no such a payment arrangement.

There have been many similar sites that use exactly the same technique to try to steal users' personal data. We have reviewed quite a few in the past, such as Cash4Clickz, PaidNova, NiceCash, CloutPay, ViralMarket, ReferralPay... An astounding number of complaints about any of these sites can be found across social media. All these websites are almost identical, use the same dashboard layout, and share the same fake "terms of use" and "privacy policy" pages.

Now Buxify does not have the terms or privacy pages and does not even say who owns it (usually says something like, "we are Buxify Pty Ltd., based in Melbourne, Australia.") Perhaps they've finally realized there's no point in trying to make it look real. People who fall for such unrealistic get-rich-quick scams won't be interested in legal pages or who owns the site, anyway. Waste of time faking something unnecessary.

Also, these fake payment notifications are dated in August. But Buxify is a brand new site, only first registered in October 2019. There is no way it can have any substantial number of members, let alone make any payments where there is no proof of the resources. 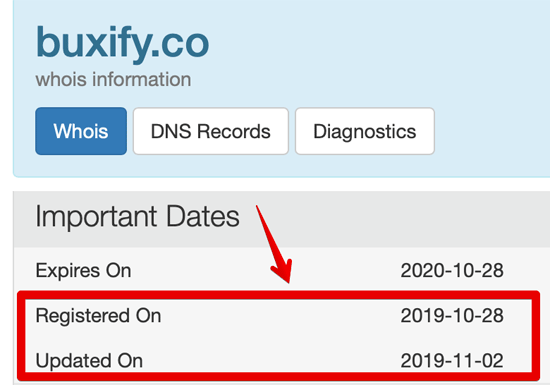 If you've already spent days seriously trying to "earn" money with Buxify, you may feel disappointed or perhaps angry now that you know you're not getting a cent out of this fake membership. But I wouldn't waste any more time trying to get legal advice, and I'll tell you why.

Technically, Buxify is not a scammer. It's not a criminal - it hasn't stolen money from you. The worst it's done to you is to lie; they say "We'll pay you" but they won't pay, that's all it is. Imagine an 8-year old kid says to you "Follow me on Twitter, and I'll give you $50." You follow him and of course, he's not gonna pay you $50. You see where I'm going? Would you sue this boy? You wouldn't. Not only because he's just a kid, but because following someone on Twitter is not a "job that's worth $50".

What you've done with Buxify is sharing a link here & there, and answer some silly questions. It's barely a job. You don't deserve to get paid. If you were to sue Buxify, that would be the verdict - the judges would order Buxify to pay you what's worth. Barely a few cents.

What's more serious is the risk of your personal data spreading across the internet. Most of the advertisers found in "Task Wall" are in breach of data protection, they use fake "winning prizes" for bait and get you to fill in your name, address and phone number. You would think that they meed the full detail in case you win the prize so that they can post it to you. There are no such prizes - gift cards for a high value, game consoles and brand new phones/tablets - none of them exists.

Instead, they'll sell your detail to third-party spam companies, then those companies sell it to someone else and so on. How do you know that none of them is a hacker?

When they have your full personal detail including the date of birth, there's so much they can do - get you into debt (pretend to be you and borrow a large sum of money), access your bank account, or get involved with even more serious crimes using your name, etc.

If you've already signed up with these fake prize competitions as part of your "tasks", let's just hope that the worst that happens to you will be to start receiving unsolicited messages and calls and nothing else. Never give out your full detail to any companies that you've never heard of - whenever you're in doubt, always google it.

There are many legit reward programs such as Swagbucks and Clixsense, their "survey walls" offer you some money for answering surveys. They're totally legitimate but there are mainly 2 critical reasons why you shouldn't be expecting much from them;

If you search for "ways to make money online", surveys-for-cash always seems to pop up as one of the suggestions, but for the reasons above, it's never really a convincing way to make money.

If Your Looking To Start A Serious Online Business...

If you're seriously looking to earn passive income as an affiliate, there are lots to learn, and you'll need to join a good dedicated training program. If you want to start blogging to make money like I am now, join me from the link below; serious users only.