Good job you decided to check a PaidNova review - when you're in doubt, always google it, check a couple of reviews and find out the truths. PaidNova uses an old scamming technique to steal your identity. Virtually everything that's being said in the site is fake. Don't believe a word of it, you'll never make a penny out of it. You'll not only waste your time but put your personal data at risk by getting involved with this scam site.

In order for you to complete the task, you need to give out your full personal data - full name, full street address, email address, phone number, date of birth, and so on. Your data will be sold and used for advertising by spammers. Sooner or later you will start to receive unsolicited emails, texts and phone calls.

PaidNova promises to pay you an unrealistic amount of money for doing some easy tasks. It is possible for you to "make" $300 a day pretty easily. The problem is, you can "make it" within your PaidNova account but you can't have it. What will happen in the end is spectacularly simple; nothing happens. They'll totally ignore your withdrawal request, and soon block your access to the account. You send a message to the "support", which doesn't exist, so you'll never hear from them. And that's the end of it.

So Why Does It Say You'll Get Paid? Are They Lying?

Yes. It makes up these fake offers to lure you in. Simple. It does whatever it takes to get as many people's personal data.

It "offers" to pay you $25 just for signing up, $10 just for referring others, $30 just for completing a task. If you have a tiny little bit of knowledge of what it is to work online, you know that it would be absolutely impossible. But if you have no previous experience, you might believe such deceptive invitations like PaidNova.

Have you EVER see anyone standing on the street waving a bunch of $10 bills, randomly giving away actual cash in exchange for signing a form or giving an opinion? No. They might give out free samples or discount vouchers, but they never give out cash. Then what makes you think anyone would throw money like that when it comes to online?

PaidNova Was NOT Founded in 2015

The way PaidNova introduces itself makes no sense at all. To start with, it claims that it was founded in 2015. But the site was only newly built in October 2019. 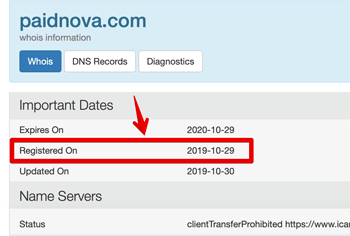 None of the rest of the introduction makes sense, either. For example;

"Big influencers are already making millions on social media so why can’t you?"

You can't, because you're not a big influencer. Influencers have put so much time and effort to establish their position. They are influencers for a reason, providing their own, unique value, and the value is appreciated by the followers. Merely sharing a link across social networks here and there - which we all do, anyway - will not create monetary value. The "task" is not worth a dime. PaidNova cannot afford to pay you money.

You see, it doesn't make sense either. PaidNova claims that it's an influencers' network. But it claims to pay you the same amount of money regardless of the number of the followers you have. If you were a legitimate company and you were to give a reward to your customers/users for sharing a link, you would surely want to give more rewards to people who have more followers. 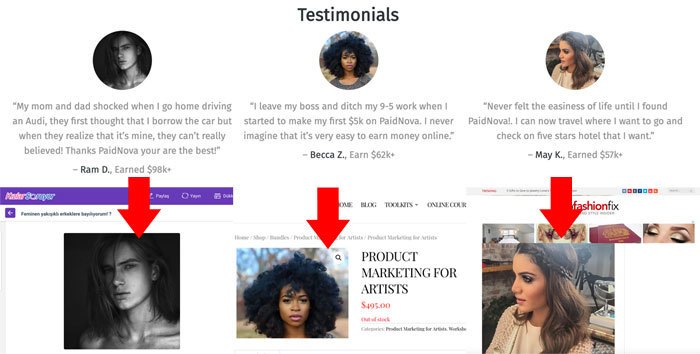 The photos used for the "testimonials" are all stock photos of a model, they've been widely used on other sites at least in the past few years. It proves that the testimonials are fake.

The account manager "Jane D" doesn't exist, either. The girl in the photo is also a hair model, and the same photo has been seen in many other sites.

As you may have guessed it by now, the payment proofs are all fake - anyone can make up what looks like a screenshot by using graphic software.

And as you can see, PaidNova is a rehashed version of PaidLeaf, created by the same scammer, which in turn other similar sites such as InfluencerCash, KashTree, CloutPay, ViralMarket, Referral Pay, etc. These websites have the same layout and format. The only difference is that PaidNova's slogan is "Make $300 a day" whereas others say "Make $500 today" - no difference or whatsoever in between them.

How Do We Know The "Tasks" Are Fake?

You can tell these "tasks" - prize competitions are fake, mainly for two reasons. One is the prize values and the other one is about the data protection policy.

It does happen. Legitimate companies do run prize draws and offer such a big winning prize at times. But when they do, they always run much more effective campaigns to make sure the competition is fair on their regular customers. They also make sure that the outcome of the event will be favorable to the prize donor as well as to themselves.

"By courtesy of Visa company, we are running a prize competition! If you buy XYZ (the product name) from us, you'll have a chance to win a $1,000 prepaid Visa card!"

This way, the campaign will prioritize the company's target customers. The competition event will raise the company's profile, and also promote the Visa company at the same time.

A legitimate company will not waste such a good opportunity by advertising the prize competition on some unknown site like PaidNova. The majority of PaidNova users are get-rich-quick dreamers, believing that they can grab some free cash by doing nothing. A REAL winning prize will never be wasted on such people this way!

#2 They Ask Your Personal Detail

For example, if a prize competition is "Win a Samsung Galaxy", then the company will ONLY need the winner's street address. They won't need every participant's, you see what I mean? They won't even need the participants' names. All they need is email addresses. After the winner's picked, the company can send a "congratulations" email and ask the winner for more information such as name and address.

These fake "prize competitions" clearly have a different intention by asking your full detail in the beginning - to sell it to third-party advertising companies. You are likely to be bombarded with unsolicited emails, text messages and phone calls in the future. And there is no such a winning prize either.

Is There Any Way I Can Get PaidNova To Pay Me?

No. Stop wasting your time. No matter how much time you've spent so far to "earn" money with PaidNova... You haven't really earned anything, because you've barely done anything. No one is a charity, and you'll never find a service company anywhere in this world who pays cash just for signing up, or pays $30 just to carry out a simple task. Internet marketing industry is much more serious and competitive than you might think.

Even if you managed to track them down and sue them, you wouldn't be able to get them to pay you. Seriously, the judge and jury could not order the scammer to pay you because you haven't worked a job that's worth the money. You haven't actually done anything with PaidNova to deserve the money!

The majority of PaidNova users are get-rich-quick dreamers, believing that they can grab some free cash by doing nothing.

If you want to stop "daydreaming" and start learning to make money online by building your own website, join me from the link below. It's free to join and receive the first 10 lessons for free. Fully supported by the world's biggest affiliate marketing expert's community. Serious users only - good luck! 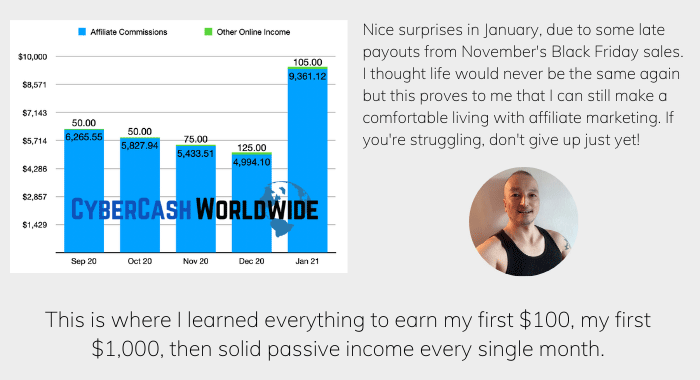 “I’m Not Making Money… Why?” 7 Reasons Your New Affiliate Business Is Already Failing

What Is An Autoresponder?