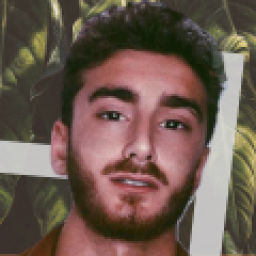 Referral Pay is another scam, whose only purpose is to collect users' email addresses and sell them to other spam advertisers. We have seen so many identical or similar sites like this one since sometime last year, and this one is no exception. In our Referral Pay Review, we will show you our findings and explain why you should not believe anything that this malicious site tells you.

Referral Pay claims to pay you $25 just for signing up. When you've signed up, you are given your unique referral link. It also claims that if you share the link on social media and each time someone clicks the link, you will also earn $2.

You will also earn each time you carry out a task: answer a survey question and Referral Pay will credit you with $30.

What's the catch? The catch is extremely simple. It's all a lie. They will never pay you, and they'll disappear soon.

It's too good to be true, and Referral Pay is no exception. No matter how much has been credited to your account, you will never be able to cash it out. Instead, the personal information you have given to Referral Pay and the associate survey companies will be passed around among illegitimate advertising companies. As a result, you will start receiving unsolicited advertising and promotional materials by email, by post and by text. 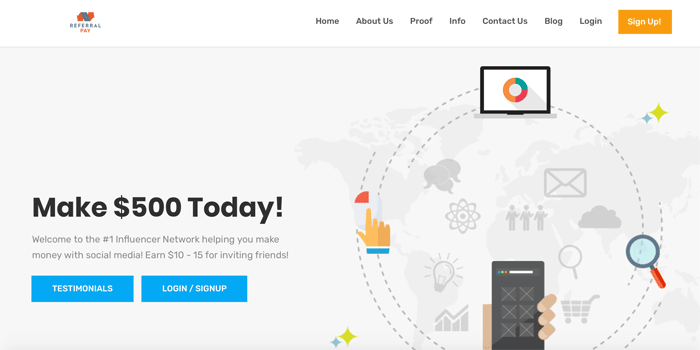 How Do We Know It Will Never Pay?

First of all, you must understand how things work. Has anybody ever paid you cash just for signing up? Big companies such as Amazon, Facebook, Google, small investment or advertising companies or even charity groups - has any of them ever paid anyone any money (not a discount voucher but actual cash) unequivocally, just for signing up? No, they never do because if they did, it would (a) give no benefit to the company, (b) be unfair and unethical, and (c) make themselves go bankrupt for taxation reasons.

You may be thinking, so what does this mean? Are they totally making this all up? The answer is yes. They are totally lying, and this incredibly childish lie seems to work successfully for them. The site has only been open for a few weeks, and we can already find some complaints from the users on Twitter.

Once again, if you stop for a minute and think how on earth anyone can pay that kind of money, you might understand. Referral Pay encourages users to refer the website to others. Imagine they gave out free money to millions of people, transferring via PayPal, Cash App, Bitcoin or by check. In either way, it would cost them a transaction clearance fee each time.

Where would all the money come from? They claim it is from advertising. Whether it was from advertising or else, their profit would be taxable. They could receive tax relief only if they gave some money to registered charity groups. But not if they gave away a share of profit to any people randomly. Simply they would be throwing money away, and it would be the most stupid thing for any business owners to do.

They Will Steal Your Identity

The "tasks" that you have to carry out are to answer surveys. They all require you to give out your full name, email address, phone number, postal address, all of which will be sold to malicious third party advertising companies. If you are lucky, you'll only be spammed with promotional mail online and offline. But there is a good chance that you will be a victim of identity frauds just like me. As I have mentioned a few times before, I had to have my bank accounts frozen and reinstated.

People are easily lured into these fake surveys because of the prize offers. The winning prizes are high in value, such as a new smartphone/tablet or $1,000 worth of shopping vouchers, none of which is real. Why do we know they're fake? Because these survey companies are unknown. If an unknown legitimate survey company was to run a prize competition and had a winning prize as big as $1,000 worth in hand, it would be a chance for them to promote themselves. They would be running a bigger campaign via social media and influencers well in advance, not be using an unknown scam site like Referral Pay.

You think you can complete one or two surveys, but that's hardly the case. Because these fake surveys pop up one after another.

For example, you answer 10-15 questions and expect it to finish in any seconds, there will be another message popping up saying "Would you like to win a $1,000 summer vacation package?" You click "No" because you just want to complete the first survey. As soon as you click No, another message will pop up, saying "Congratulations! You are selected to win a brand new iPad!"

You cannot close the screen, so you enter your name, address and phone number again. And there'll be another survey question. You don't know if you're still on the first survey, or if you've completed it and now you're on the second one. This is what has happened to me. Referral Pay was supposed to give me $30 for answering a survey. I don't know if I completed one because I was distracted by the endless surprise invitations. I didn't complete it because $30 was never credited to my account.

How They Entice You

Referral Pay claims that there is no minimum threshold to cash out your credit, but you have to refer it to other people and complete many "tasks" before you may become eligible to claim. How many tasks to complete and how many people to refer are unclear.

But one thing I can tell you is how quickly my "earnings" add up. I created a brand new Twitter account and posted my referral link. A few seconds later I noticed in my Referral Pay account that I had earned $8, received 4 clicks. It means (according to this), 4 Twitter users clicked my link. Hard to believe because the brand new Twitter account has no following or followers. I posted my referral link once more, and again I received another $8, 4 clicks. This is totally made up.

Within a few minutes of signing up with Referral Pay, I earned $61 in total. The amount would have motivated me if I didn't know that all of this was a scam and believed it innocently. I would have tried the "tasks" to earn more.

I was asked to list up Pros as well as Cons but unfortunately, there is no benefits of signing up with Referral Pay for you.

If Referral Pay is the first of this kind that you have encountered, I hope you have learned that professional looking sites like Referral Pay can be scams. Nobody will ever give out money for nothing in this world, online or offline. If someone offers to pay you, the best thing is to think about how it benefits them, because there is always a catch (you have to buy their product first, then they'll give you a cash-back, for example). Referral Pay has no catch, meaning the whole system is a scam. 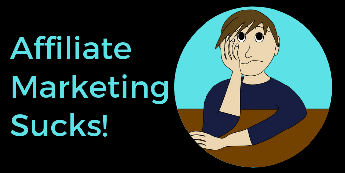 9 reasons that you don't want to be involved with affiliate marketing - sad, depressing, expensive, and the people...! 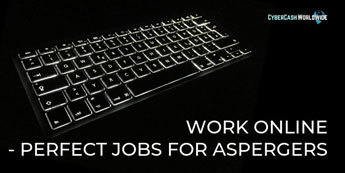 Don't you tell me I can only work in a factory because I can't communicate. I'm an excellent communicator!

I work with Ray Alexander as an assistant. Self-starter, quick-learner, and well-organized adventurer. I occasionally write blog posts on this site with Ray's help as I still learn English. Right now I'm based in Spain.

Power Lead System Review – How You Can “Actually” Make Money

Power Lead System Review – How You Can “Actually” Make Money