NiceCash Scam Review – Stay Away To Protect Your Data!

No, NiceCash.co is not an influencers' network. It was not founded in 2015, it was only made up a few weeks ago. It has NOT paid $44m to over 300k members as it claims. It's never paid anyone a penny and it never will. Basically everything that's being said in the website is untrue. My NiceCash review will explain why it will not let you "take advantage of social media" but it will only damage your reputation instead. It's a data harvesting scam - you'd better stay away.

Be it affiliate marketing, eCommerce business or cryptocurrency investment... If you've ever made money, or even considered making money online seriously, you can instantly tell any sites like NiceCash is fake. Because no company - no matter how rich they are - pays cash to social users so randomly so easily.

NiceCash is no exception. It claims to pay you $25 just for signing up, $30 each time you complete a ridiculously easy task and $10 for each friend you refer to.

You will see your "account balance" in your dashboard quickly increase as you carry out the tasks, which will motivate you to do even more tasks and refer NiceCash to more friends. NiceCash encourages you to "make $500 today" - yes, it is possible to make it but the problem is, it will never let you have it.

The payout term is 30 days, means you have to wait for 30 days after you send a withdrawal request. This is what happens; you wait for 30 days and hear nothing from them. So you email them to find out what's happening, but you'll receive no response. Occasionally they'll reply to say "We are experiencing a technical issue. Please wait for another 14 days for your payment to come through." 14 days later - nothing. You send them another email. No reply. Keep emailing them and they'll block access to your account. 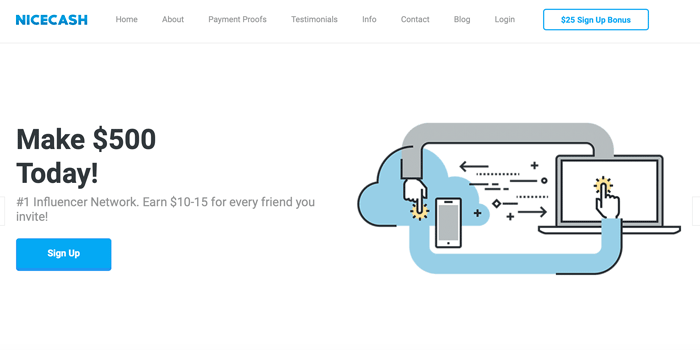 NiceCash itself is affiliated to spammers, i.e. fake advertisers whose only intention is to collect users' personal data. In the "Task Wall" you will see invitations such as;

To clarify - they are offering 2 x separate (fake) benefits. Each time you complete a task,

None of these prizes is real. They all use fake prizes of large value to lure you into ridiculously easy surveys. And the surveys are not real either - their only purpose is to get you to give out your personal information; full name, email address, cellphone number, street address and your birthday. If you believed there would be a chance of winning such a great prize, you would give out all your detail. That's their plan.

If you look at each 'task' closely, you'll find the term that simply says "the winner will be notified by email." Of course, there is no winner and there is no prize. No one will know.

Just stop and think about it for a minute - if a legitimate company really had a $1,000 gift card to give away, they would use it for a more meaningful purpose. They would advertise it to their customers, not some random users on social media. They would offer you to enter the competition only if you purchase their campaigned product, for example.

These fake 'tasks' are there purely to collect your personal detail, so once you fill out the form, you know what will happen - you'll start receiving unsolicited emails, ad texts and cold-calls. 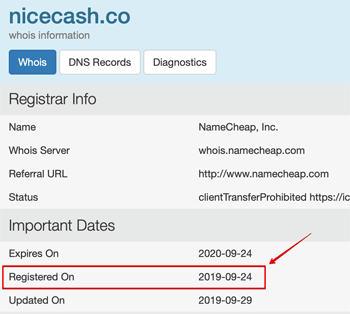 The site does not reveal where the company is located, who the company owner is (obviously), or does not explain any information about the company.

In fact, the acknowledgment at the footer of the page says "© 2015-2019 NiceCash, Pty Ltd." but this company name is not found anywhere in any corporate registration sites. It means that such a company does not exist.

Again, if you have a little bit of decent experience in making money online, you know how to find out website information easily and the site nicecash.co is brand new. It shows that clearly, NiceCash is targeting casual social media users and sending false signal that there is a way for anyone to make money so easy. There really isn't!

Everything Is Fake, In Fact.

Testimonials are fake; for example this photo of a woman is a royalty-free image from Pixabay/Pexels, and the scammer has been repeatedly using it in other similar scam sites.

The "payment proof" can be falsely created using graphic software. Random messages that appear in the member's dashboard such as, "Recent Success: $650.00 paid 6 seconds ago to @adin**z16 via PayPal" are totally made up.

To mask the fact that NiceCash itself is fraudulent, it sets out some "rules". You cannot open multiple NiceCash accounts, refer it to fake social accounts or use a VPN service, otherwise your account will be banned... It's just saying so to make it look like NiceCash is providing a legitimate service.

If you've seen someone on social media - a real person - actually say he/she has made money with NiceCash, don't trust that word. That person doesn't know NiceCash is a scam just as yet, and they're just trying to get as many referrals. Or that person is an insider.

It Would Corrupt The World Economy

NiceCash is open to anyone who can access the internet worldwide, and it claims to pay the same rates ($25 just for signing up, $10 for referral and so on). But some countries are richer than others. In some countries, $50 is equivalent to a whole month's salary. If all of this was true, it would go viral in the poorest counties, make people never have to work again and turn the world economy upside down. You see what NiceCash suggests is ludicrously impossible?

NiceCash Is A Scam! Can I Sue Them?

Can the girl sue him? If you were the girl, would you call a lawyer and take legal action against the boy? The answer is obviously not, the two logical reasons are because;

You see, NiceCash is equivalent to that, merely acting like this boy. If you have wasted some time with NiceCash and now realize you can't get a cent out of it, you may be upset and feel like doing whatever it takes to "get your money back". But there was never your money in the first place.

No Work = No Reward

Don't ever believe in easy money systems like what NiceCash.co tells you. If you are brand new to making money online, you might think there may be some special secret ways to earn money without putting any effort. That's never the case. None.

No company would voluntarily throw away money to some random social media users. That would be unethical. If they were to give out money, they would choose a well-recognized, registered charity group. Otherwise the company would be charged with extra tax unnecessarily by the authority.

You'll be rewarded a commission only when you have helped a company make money - as an affiliate or as an employee. The online business world is as severe as offline.

If you are interested in building your own website and start making passive income online by blogging - niche affiliate marketing is a proven business model that requires little investment. But you need to be willing to learn the technique to get your website ranked in Google, and you'll have to keep on putting your effort persistently. If you have a passion, you're welcome to join me!

All In One Profits Review – Past Its Sell-By Date