My ViralMarket.co review can prove that this is another scam site, targeting social media users for data harvesting purposes. It falsely claims to pay users large sums of money for doing minimal tasks.

Just by signing up and sharing your ViralMarket link across social media networks, you can easily "earn" as much as $50. Motivated by this, you want to continue to do some more tasks and earn $100+ in a matter of a few hours. The catch is, you'll never be able to cash it out.

What they will do is spectacularly simple - just won't pay. They'll ignore all your messages. They don't care. They never have that kind of money anyway. Catch them if you can, their company name and address are all fake. Not only their identity but everything that this site tells you is actually untrue. FAQs, "proofs", help page, payouts and "real time" messages are all completely made up.

When the "right time" comes, they'll shut the site down and come back with a totally different domain name. Unethical? They really don't care about that! 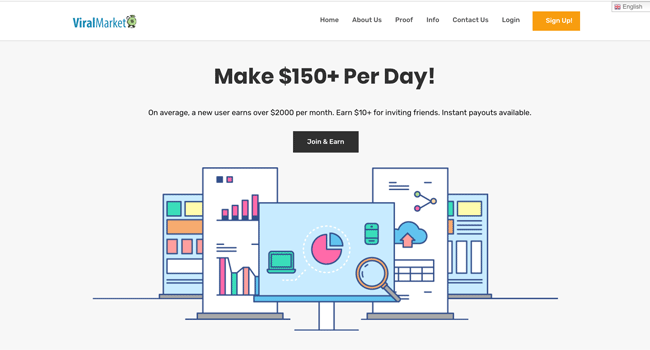 You Are A Perfect Victim If You've Signed Up

So why is Viral Market doing this? Telling you that you'll get paid so much so easy but all of this is a lie?

Their objective is one thing - to collect users' email addresses, so that they can sell them to third party traffic sellers. And they're particularly looking for people who believe in get-rich-quick schemes. People who really believe that there are ways to make a lot of money without doing much work. People who are desperate for cash, forever searching for lucky lottos online...

If you've signed up with sites like ViralMarket.co, you are a perfect victim. Because you believe in get-rich-quick schemes, right? You think that someone online can pay hundreds of dollars in exchange for signing up and sharing a couple of links on social media.

So long as you believe in that kind of thing, you'll never be able to get out of the online scammer's vicious loop. I'll explain what really happens.

Your Email Address Will Go 'Viral'

Supposedly ViralMarket.co is named after Viral Marketing - you as a user, will be sharing the link and promoting the site across social media, you're getting your followers to join and do the same. It's going viral and you'll be an 'influencer'. That's a superficial idea.

The only thing that's going 'viral' is your email address among spammers.

Now would you click the link? People who believe ViralMarket.co would click it because these emails are also get-rich-quick scam invitations.

In other words, people who don't believe these trashy emails would not sign up with trashy sites such as ViralMarket.co.

Okay, I'll rephrase it once more;

ViralMarket.co want to collect get-rich-quick dreamers' email addresses, because they are the ones who would likely to click the spam email links. If people don't click, they won't make money ($0.30 - $1.00 per email). It means that the only way to get as many get-rich-quick dreamers to sign up with ViralMarket is to use the same scam tactics - falsely offering a lot of money.

The other way to "earn" money with Viral Market is to enter a fake prize competition. When you've completed each competition, $30 will be credited to your Viral Market account, which can never be cashed.

Think about it once again very carefully. A legitimate prize competition or online tasks program will not pay you such a large amount just for entering a competition. They can't afford to pay. Nobody can.

ViralMarket.co makes money as an affiliate - every time you enter one of those prize draws, it will receive around $1-$1.50 from the advertising company. How can it pay you $30 when it only receive up to $1.50? They can't. It's all a lie!

The task wall includes prize competitions such as "Win $1,000 Walmart voucher" "Win $100 McDonald's voucher" etc. When you click one, you'll be directed to another page, owned by an advertising spam page.

It will ask you to enter your email address first - which will be sold to other third-party advertising agents (legitimate agents or spammers - they don't care.) Followed by a few basic questions - are you male or female? Your age? Do you use Facebook? Regardless of your answer - yes or no, male or female, you'll be presented with welcoming news. "Congratulations! You are qualified for a Walmart voucher!"

It doesn't mean you've won it. You're qualified to enter the competition. You'll never win it anyway because these competitions are most likely to be fake. They're not officially approved by the brands.

And if you proceed to enter one of those competitions, you'll be asked to fill in detailed personal data. Your full name, street address, birthday, cellphone number, and your email address once again... All of which will be sold to third-party advertising agents, so that they can bombard you with unsolicited emails, text messages, and junk mails to your door.

You'll be asked a series of survey questions and, upon completion you'll see a message that reads; "We will contact you if you are the winner." But that's not the end - a new invitation to another competition will start, typically something that sounds better than the original completion to keep enticing you to their endless data harvesting loop. If you click "Yes", you'll be directed to another fake prize draw, run by another spam site. It will ask your personal detail all over again.

There Are Many Other Similar Scams

There are so many other similar sites who use exactly the same tactics to collect users' personal data fraudulently. Clout Pay, Money Rewards, ​Notion Cash... I can see ViralMarket has duplicated Referral Pay - the creator has copied the format and hasn't even bothered to change the name in some of the pages.

It has also duplicated Viral Pay, Viral Bucks and Viral Work, because the contact address at the footer of the home page "4459 Hillview Street, Columbia" is actually the same.

However if you check the "Contact Us" page, ViralMarket.co is located at 6100 Wilshire Blvd, 2nd Floor, Los Angeles, CA. Check that address on Google Map - you'll be able to see no such company is in the building.

All these sites appear to be owned by different companies and each site displays the company's 'registered' street address. All randomly different locations across the world - USA, Canada, UK, Australia, etc. But they're all fake. Just like ViralMarket, if you closely check the postal address, you'll find no such company exists in that spot.

You Don't Deserve The Money

Listen, if you've tried one of these sites and feel you've been scammed, I'm sorry, but you really don't deserve to make that kind of money. You don't deserve $25 just for signing up or $30 just for answering fake surveys. Stop dreaming, because that's not how businesses work in this 'real' world.

At least you joined free. You haven't lost your money. You've wasted your time, that's all. If you've shared the ViralMarket link, make sure to tell your followers now that it was a wrong thing to do (so that they won't lose faith in you!)

If you still think, there may be, there may be an 'easy' way to make money somewhere on the internet... Successful internet marketers never use the word 'easy' when explaining the method itself.

For example, Wesley Virgin's "Overnight Millionaire System" that I reviewed recently - Wesley motivates you and teaches you how to make a lot of money, potentially in a short period (join him if you haven't!) But he never tells you that it's 'easy'. Because nothing ever is, as far as making money is concerned. Online or offline.

Make Money As An Affiliate

By now, I hope you understand that there's no way you can make decent money by doing such simple tasks. There are several ways to make money, most of which require you to work hard, otherwise require you to take risks (i.e. invest a lot of money and you may not make a profit).

You can start an affiliate marketing with little money spend - you can't go along without spending a dime. There's a lot to learn but none of which is technical. That's how I make money - join me if you are ONLY serious about it.

How To Make Money As Amazon Affiliate

How to join Amazon Associate program and safely promote their products.