Notion Cash is another site that promises to pay you for completing tasks and answering questions. But what it says in the home page is dubious and full of contradictions. What it actually does to you is not how it's advertised. Not only will you waste your time but you'll also welcome some bad consequences. My Notion Cash review will look into this app, and also show you where the red flag signs are.

It's important for you to protect your personal data by staying away from any sites like Notion Cash! 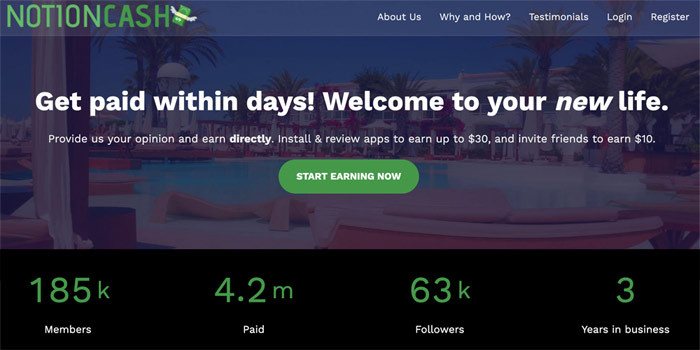 What Is Notion Cash?

Notion Cash is formerly named Kids Influencer Club (kidsinfluencerclub.com), and a mirror site of Kids Earn Cash (kidsearncash.com), run by a fake company. It claims to pay out suspiciously high rates. $25 just for signing up, $10 just for referring your friend each time, and $30 for answering a survey each time.

You'll see these amounts adding up in your dashboard as you do your given tasks. But you won't be able to cash it out. It will never physically pay you. Instead, this site is used for data harvesting purpose - it collects your personal data and sells it to third parties.

Your main task is to answer surveys to "win" a monetary reward such as a gift card. You need to give out your (1) email address, (2) your full name, (3) phone number and (4) street address before you start each survey.

Enter your personal information and they'll make full use of it. You'll most likely to start receiving unsolicited emails, phone calls, text messages and junk mail in the post. But there are possibly much more serious consequences. They can;

Are They Fraudsters? Then Why Not Call The Police?

Notion Cash itself may not be fraudulently abusing your personal data. But it's in partnership with other agencies, and these agencies may be. Potentially, in fact very likely.

When you click a button to "start your tasks", you'll be directed to a third party (the agency's) site who collects your information as it carries out a survey / prize competition. Most of these third party sites have their own "privacy policy" page, which does not necessarily promise to keep your personal data secure. 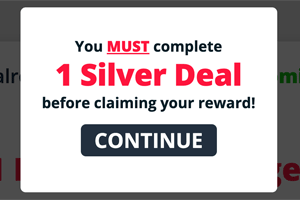 And what happens with the actual surveys - this may sound familiar to you if you've tried some of those. Just as you think you're about to complete one, you'll be redirected to another site (owned by another agency). The message will say something like, "You're almost there! Just take ONE MORE STEP to secure your position for the prize competition!" You click it, and It will ask your email address, full name, phone number.....all over again.

There'll be plenty of unrelated messages along the way, asking if you're interested in free restaurant voucher, free insurance quotes, to distract you from thinking "but I've already given you my name and address...?" Anyway these surveys are endless and insane.

If worse comes to worst, this is the scenario. Imagine a few weeks later, you discover that you are a victim of identity theft. You won't remember which website URLs you've given your personal data to. Even if you do, it's virtually impossible for anyone to prove how the data was passed across. If that happened, Notion Cash would likely to deny wrongdoings, insisting that they're just lending their webspace to third-party survey programs.

Still don't believe it? Then here are red alerts to tell you that Notion Cash is fake.

Notion Cash says that the site is operated by a subsidiary of Notion Cash, LLC in New York. But this company cannot be found in the NYS Department of State's business entity database. However if you see the Notion Cash's terms of service, it says it's operated by the name of Kids Influnecer Club, LLC in the state of California. Again, this name doesn't appear in the database held by California Secretary of State.

You see the tasks - answer surveys to win gift cards, shipping vouchers and electronics products. There are two reasons why these survey competitions are fake;

1. They're Asking Your Sensitive Information

What legitimate survey companies need to know is your living status (age group, occupation, education, etc.) NOT your name, full address and phone number. If they ran a genuine prize competition, they would only need the winner's detail after the draw, no need to collect every participant's detail before the draw.

2. The monetary unit is extraordinarily high

Real survey companies pay out a small fee (as low as $0.20 per survey - a few dollars) to each and every respondent. Because they are looking for 'real answers'. They don't try to bait people who are only after free money because that would collect biased answers.

Occasionally they offer prize competitions, but the gift card values are $50-$100. They never offer a high value such as $1,000.

If you see Notion Cash and think that you finally found a great place to make decent money online... Get real. Be logical. That's not how businesses work in this world! 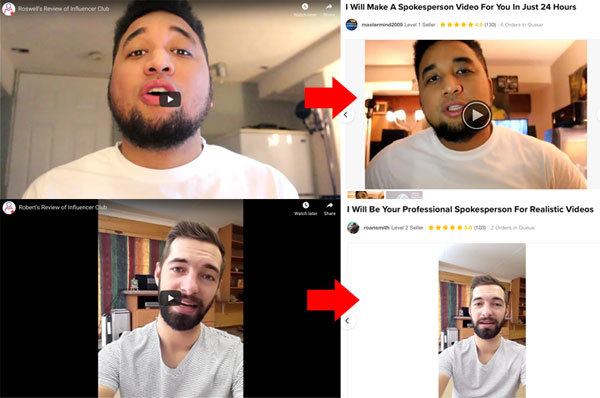 The video testimonials are created by actors, hired from Fiverr. These two guys below are both charging $5 to make the video appearance.

It proves that these are fake, but also proves that Notion Cash doesn't have money, at all. If they did, they could have paid more to more decent actors elsewhere other than using Fiverr! Do you still believe that Notion Cash has paid out $4.2 million to the users as it claims, and actually will pay you any money at all?

Red Alert #5 They Can Steal Your Bank Detail

Under the Payment Settings menu, you are asked to fill in how you want to get paid - by bank transfer, PayPal, Bitcoin, Cash App or by check.

The website itself is using an SSL certificate (https://), making it harder for hackers to steal information. But it's a simple contact form and it doesn't tell you how securely Notion Cash is storing your sensitive data. Whatever information you typed in is stored in the Notion Cash's database as it is, you never know who can access it, and you never know if Notion Cash is selling your bank detail or PayPal address to third parties.

Having said that, the form is just a simple box. For bank transfer option for example, it should be telling you the required information (account number, routing number, bank address, etc) but it doesn't. Because it never intends to pay you in the first place!

What You Should Do With Notion Cash

I'd say, just stay away because you're not receiving a penny nor any benefits from it. But if you are really, curious enough to join and see what it's like, here are some tips for you;

You know, you won't make money just by sharing adverts on social media here and there. Everyone is - millions of social users are - doing it, hoping that someone will click the link and it will get them somewhere to start making money. Hardly ever.

If you're willing to learn a legitimate way to make a success online but you don't have anything to sell, don't worry. What you need to start is a niche affiliate marketing because;

Signing up is free, and you'll be ready to build your own website (also for free) in the next few minutes - join me if you're up for it!