Viral Bucks claims that it "allows you to monetize your social media use." It claims it was founded in 2017, has over 200,000 members and it's paid out $52 million... But the domain is less than a week old. Estimated daily visitors are less than 10 people. Something's wrong, isn't it? I mean, it's spectacularly wrong. The following Viral Bucks review will discuss whether it's worth joining - though we already kind of know it's not! 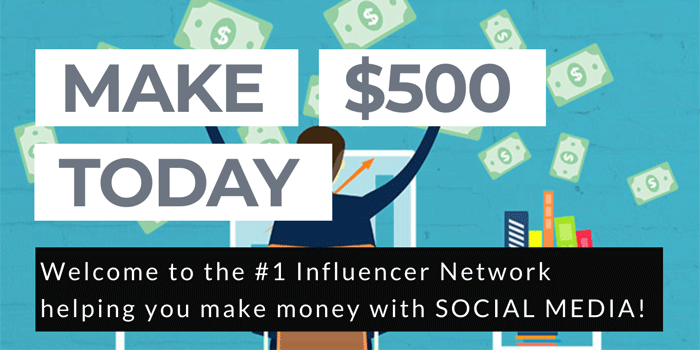 Viral Bucks claims that you can make $500 today - you'll receive $25 just by signing up, receive $10 each time you refer a friend, receive $2 each time your referral link is clicked. It's free to join. There's no payment involved on your part. Too good to be true.

The purpose of this app is really, unclear. The FAQs are only focused on how users can get paid, how long it takes to get paid, and how much. Anyone who is 13 years of age or above can join.

So any 13 year olds with a decent brain would ask this question; where does all the money come from?

Viral Bucks says the money is generated from ad-spend revenue and sponsorship products, but I see very few ads on the platform, extremely unlikely to generate enough fund to pay $500 each and every new user.

It says "Viral Bucks has been around for less than 3 years" (no - less than a week!) then it goes on to say "...less than 3 years and has already become the #1 Influencer Network. YES, we’re that good."

The statement is obviously untrue. You go and check on social networks - the company's been barely mentioned on Twitter. The Facebook page was only created on April 30, 2019. Check #viralbucks on Instagram - no results found.

According to Worth Of Web, Viral Bucks' estimated monthly revenue is $1.44 per month / $0.05 per day. The site being less than a week old, that's about right. There's no way it can pay the users any money.

It didn't take me a few minutes to search to find out that Viral Bucks was a mirror site (an exact copy) of Viral Dollars and Viral Pay.

Viral Pay was a notorious scam site - the users were never paid as promised, and they started to complain. So this scammer has closed Viral Pay and set to redirect the site to Viral Dollars. I guess Viral Bucks is a backup site that's owned by the same scammer. 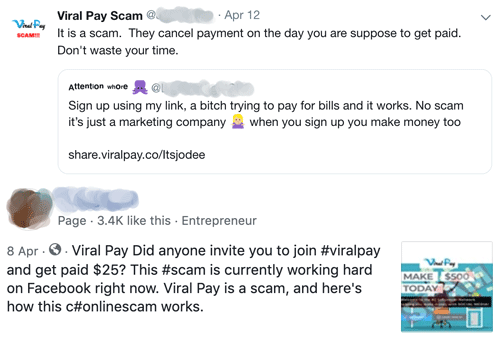 Viral Bucks is likely to be a phishing scam. It promises you to pay the users, but it won't pay. Instead, it's using the platform to collect the users' data.

The key place is the "$30 Task Wall" from the left-hand menu. Users are asked to "complete an easy task - answer a survey or enter a gift card competition" to earn $30. But only gift card competitions are listed there, because legitimate survey companies would never partner with illegal sites like Viral Bucks. 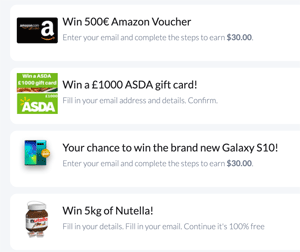 The amount of the gift card is inordinate such as, win a $1,000 Amazon voucher, win a $500 supermarket voucher - because they're not genuine. By clicking the link, you'll be sent to a fraudulent third-party site, instructing you to complete a survey after survey. Each time you click on the link, you'll be connected to a different survey site, which offers a different reward and not the original voucher as promised.

And of course, you will "earn" $30 in your account, but you'll never actually get paid.

You also give out your email address upon signing up - your address will likely to be sold to third parties.

The testimonials are fake, you know. I can see 3 people leaving a video testimonial but I know that at least 2 of them are actors, paid to say whatever they're asked to say in front of camera for $5 on Fiverr.

How Does Viral Bucks Motivate Users?

It's cleverly done. I took a little time to explore it.

But I won't be able to claim it until I complete other tasks - even if I referred Viral Bucks to 100 people, I wouldn't be eligible to claim my money. I'd have to go to enter the prize competitions numerous times, give out my email address, postal address and my cellphone number to a number of third-party sites to "earn" $30 each time.

Had I been naïve enough to believe all this - believed that the $83 I'd earned was real and the prize competition was real, I would have been pretty motivated. Wouldn't you?

I would have given out my personal data to literally hundreds of spammers and the consequence would be - I would have started to receive unsolicited emails and texts, and junk mail by post.

Viral Bucks offers 4 x different payment options. PayPal, Cash App, Bitcoin or mailed check. Upon signing up, it urges you to enter the payment method (PayPal email, CASHTAG, Bitcoin Wallet or postal address). It doesn't not tell you that the panel is encrypted. So there's a big possibility that the Viral Bucks is collecting your personal data from here.

Conclusion – Is Viral Bucks A Scam?

From the numerous complaints that can be found on Twitter, you will never be paid the amount that's shown on your dashboard. The amount you "make" is far from realistic. If you could earn $10 just by referring someone, then network marketers in the world wouldn't be quiet. They would have become millionaires easily with Viral Bucks by now.

If you are really, really curious, I suggest that you sign up using a fake email address, as it won't ask you to confirm it. Give your real address and your inbox may be overflowing with unsolicited sales emails in the future.

What You Can Do To Make Money Online

Remember, no one will voluntarily give you money just like that. If you wonder, maybe there are some mysterious ways that only work on the internet and they may be paying out some easy money if you click, copy and so some "easy tasks"... There's no such thing. There is never such thing online, don't believe any of that!

The online business market is no different from the offline business market. You have to learn how to work, and you have to be willing to learn. The good news is, there will be something new and exciting. I will show you how to start affiliate marketing using your own website.