Money Rewards is a mirror site of Kids Earn Cash, another data harvesting scam. It promises to pay you for completing surveys, but all it does is take all your personal data and will never pay. There are many other sites who offer almost identical schemes, and they're only popular among email spammers because they can be rewarded a few cents every time they promote these sites to get-rich-quick dreamers. My Money Rewards review will explain why you should never bother to sign up... If you want to protect your personal data! 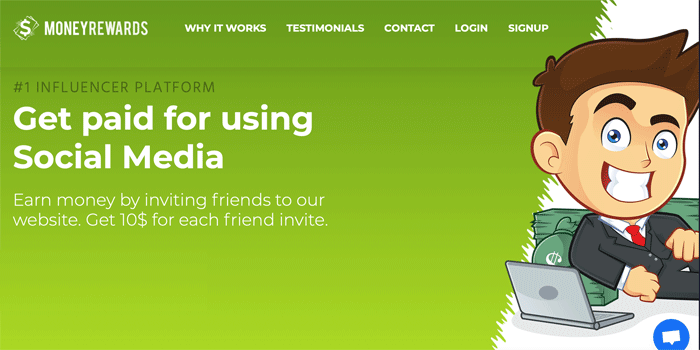 What Is Money Rewards?

Money Rewards is run by a fake company, who also possibly owns Kids Earn Cash (kidsearncash.com), which is also a mirror site of Kids Influencer Club (kidsinfluencerclub.com), Notion Cash (notioncash.com). There's also a "viral" series - Viral Bucks, Viral Dollars and Viral Pay. They may all be owned by the same people, or in a syndicate, or each site is unrelated from one another, we don't know. We don't have to know - anyway they're all the same.

Money Rewards claims to pay you $25 just for signing up, $10 each time you refer it to someone else and $20-30 each time you take a "paid offer", requires you to give out your personal information (full name, email, phone number and postal address).

Your personal information will be sold to third parties. So you will most definitely start to receive spam emails, cold calls and junk mail in the post. These third party companies are disreputable, unknown spammers, so you will also put your identification at risk.

When you first sign up, your account will be in credit by $25. And each time you complete a task, the balance will increase. But what Money Rewards does is - historically - it never let the users physically cash it out. The users complain by email and via social media, but the complaints are flatly ignored, and eventually the company disappears.

You know what, the scamming method is hardly new. In fact, similar scams have been around for decades. I remember over 20 years ago, a friend of mine participated in an online survey/competition and "won" a large sum of money, as big as the price of a car, I seem to remember. Of course he didn't receive a cent, the company disappeared, and he started to receive an enormous amount of junk mail in the post as well as unsolicited emails.

Amazingly 20 years later the same type of scammers are still alive & kicking, means the "market" is still remarkably active. People don't believe anyone who claims to give out cash on the street, but they still believe it's possible on the internet. There must be some kind of money-mining system and they can receive money worth of a few hours' wages just by signing up with some unknown app.

I'm not trying to be sarcastic. In this day and age, so many people still seem to be mystified by the whole online business industry. So if you don't know the truth and if you want to know it, nobody ever gives you $25 just for signing up or gives you $10 just for referring someone else.

To clarify further - it is possible if you have spent money - you purchase a product for say, $100, and the company generously gives you $25 as a cashback. That's possible. Just remember, if you haven't spent any money, then nobody will pay you such a large amount for doing a simple task.

The screenshot below shows the list of some of the "paid offers". If you click one of them, you'll be directed to the fake survey site (get a $100 McDonald's gift card just by answering surveys). And you'll also be "paid" $24 by Money Rewards, which is never going to happen.

Most of the "paid offers" displayed in Money Rewards are seemingly fake prize competitions. How do we know they're fake? Because the prize values are unusually high. How is it fake if the prize value is high? Because it's unfair.

When a decent, legitimate company looks to engage with consumers - runs a survey for a prize, or whatever;

These fake data harvesting companies "offer" a big winning prize because their primary purpose is to collect your data and sell it. The prize should be attractive so that you enter your real and address. The prize should also be something that everyone wants - shopping voucher, the latest smartphone model. Nothing academic or highly technical because, frankly speaking, people with a decent brain can easily suspect it and complain.

It actually had no end. There were 20+ survey questions along the way, but they were often interrupted by other prize competition invitations. Game console? More burger vouchers? Sweepstakes? As if there was an option... Even if I clicked "no", something else would come up, asking for my name, email... I would forget what the original prize competition I entered was - it was for $1,000 Walmart card - and I wouldn't even know it my entry was completed.

So when I first signed up with Money Rewards, $25 was automatically credited to my account. My account showed 1 referral, which doesn't make sense because I hadn't referred it to anyone.

I shared Money Rewards on Twitter for a second, deleted it within one second, and I received $6 right away (is that all?) Within that one second, 3 people clicked my link and signed up with Money Rewards. Amazing, can you believe this? No.

Like any other scams such as Kids Earn Cash, Money Rewards falsely adds credits and referrals to your account in an attempt to motivate you to keep taking actions, i.e. enter more fake prize competitions and refer it to more people.

Report It To The Authority If It's A Scam?

If you've already spent substantial time trying to "earn" money with Money Rewards but now you know you're not able to cash it out - I understand your frustration. But don't waste your time anymore, just move on and learn from it. (Things like that are just too good to be true!)

It'll be hard for anyone to catch fraudsters like Money Rewards because all they do is to take advantage of your false opportunity, they've never actually stolen a cent from your pocket. All you can do is simply to stay away and ignore them.

Get Some Serious Work Done - It's The ONLY Way!

How you can make money online - no different from making money offline. You have to put as much effort to work. The real advantages are that you don't have to travel to work (obviously), you get to meet anyone from any parts of the world, and you can log off any time you want. (You don't have to go for a drink with people you don't even like!)

But the amount of work you put in will be no different from any other work. Don't believe in phrases such as "make money just by signing up", "only 20 minutes of tasks each morning".

The business model that I'm in to make $5k or over every month is a "content" affiliate marketing. Blogging is one way, YouTubing is another way. You can write product reviews just like this one, give your honest opinion to build a trust relationship with people around the world.

You will need to spend a little bit of money on online tools along the way, but you can try out for absolutely free for as long as you like. If you'd like to join, click the link below. See if it's something you want to do, but if you have any questions don't hesitate to contact me at any time!

The Most Secure Web Hosting Provider

The Most Secure Web Hosting Provider

Build An App For My Business – Will It Be A Good Idea?

Build An App For My Business – Will It Be A Good Idea?