"Money.xyz" sites are all scams. They falsely promise users for paments in exchange for viewing ads, while they send no-quality traffic to e-commerce websites. My Money.xyz review will explain how you'll be wasting your time from a user's perspective. But more importantly, I'll focus on how you can make decent money legitimately.

What I'm trying to say is, if you keep chasing reward programs such as view-ads-for-cash or surveys-for-cash, you'll never move forward from where you are now. Everyone else is trying to learn real "working from home methods", you'll soon be left behind if you don't catch up now.

Money.xyz scam sites falsely offer a reward / get-paid-to scheme. The aim of the owner is to make money for themselves by displaying cost-per-impression (CPI) ads. However, CPI ads usually pay very little money, e.g. less than $0.001 every time someone views an ad. The Money.xyz owner would have to get thousands of people to view them to make a decent income from it.

So they randomly invite new users by falsely promising to pay them $0.10 each time they view an ad. They have created (and keep creating) countless identical sites with different URLs in order to maximize the number of signups.

Obviously, it's impossible for the owner of money.xyz to pay 10 cents per ad to a user when the revenue is less than a cent per ad.

Their scamming tactic is simply not to tell users about the terms of payments beforehand, such as the minimum payout threshold. And every time a user tries to withdraw money that they've "earned", money.xyz will set a new challenge, as if it's required by the rule. It's just an excuse to avoid making any payments. The users will find it impossible to get paid in the end and quit. Whatever you do, you'll never receive a single dime from the money.xyz sites.

Likewise, users are not required to view the ads for a certain length of time, not even longer than a second each. They're invited to join these sites "to make money", not interested in any of the ads, anyway. What it means is that the advertisers are unknowingly wasting their money by displaying their ads on Money.xyz sites to receive useless traffic. 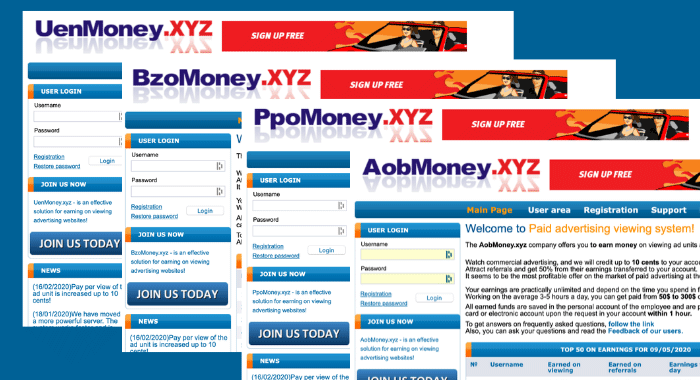 Which Sites Are They, Exactly?

There are countless sites with an identical format, such as BzoMoney.xyz, FvoMoney.xyz, JvoMoney.xyz, MluMoney.xyz, PpoMoney.xyz, UenMoney.xyz, YavMoney.xyz...... Impossible to list them all. Some of them have been around for a while, while others have already been shut down. Mathematically when you think of the variation of 3 alphabetic characters, that would be 26 to the power of 3 (26x26x26), so whoever creates these sites can forever keep replicating the copy sites.

What Are Their Excuses?

Even if you've viewed one ad and "earned" your first 10 cents, you are allowed to request to withdraw it. You'll be asked to enter how you want to get paid; Credit card, PayPal, Bitcoin, bank wire transfer, or Western Union. But when you send your withdrawal request, Money.xyz will immediately reject it by saying;

So you view 1,500 ads and get your account balance to reach $150. Now you send your withdrawal request for the second time and receive another rejection message;

So you do start referring to others and when you've got 40 of them to join in, you'll receive another message that says;

...and so on. And they'll always ready to remove the site completely and create a new copy site, so you'll never catch them.

But there's something that's more serious. They offer you to speed up the verification process in exchange for money. If you don't want to wait for 30-60 days, you can pay them $10 in Bitcoin. Why is it more serious?

When A Liar Becomes A Scammer

Well, if they simply make empty promises, they're not technically scammers. They're just "being a liar." They say they'll give you some money, but they won't. You've barely done a decent job for them. (Come on, viewing as is NOT a job. You view 1,500 ads for a second each, that's 25 minutes, strictly speaking. You don't deserve $150.)

If you were to hunt them down and managed to sue them, the judge and jury would be unlikely to order them to pay you that kind of rate, you see what I mean?

However, when they start taking money from you, that's different. It'll be an "advance-fee scam" - Well give you a lot of money, but you have to pay us a lesser amount of money first. Some existing users may have potentially "lost" money to them, and that's a real scam.

Well, this is a very rough explanation, ignoring things like an opportunity cost, compensation for stress, etc. But I hope you understand what I mean.

I find the "Support" page quite amazing. It lists some questions from fake existing users and the responses from the admin. For example, one reads;

It's clear that the scammer deliberately tries to give you the impression that the existing users are making thousands of dollars on average, so are you. The whole page is obviously fabricated.

Now you know the Money.xyz sites are all scams, you're not getting a penny out of it. Then which systems are legit? You may ask.

Well, the harsh truth is, you'll never really make much money from those reward programs / "get-paid-to" programs, even if they're legit. Some programs such as the following are considered "good";

But "good" means you'll spend hours and hours each day clicking, without using your brain, to earn some pocket money. That's not the way forward, you see what I mean? Surveys for cash, view ads for cash... They're not meant to pay you much. Not good for you and actually, not good for them either...

They're Not Paying You Much Because...

...If you think about why those services exist, then you'll see what I mean.

Can an 8-Year Old Kid Do This Job?

You know, you only get paid for the value that YOU add. In real life, you only receive a decent income when you use your skills, right? Lawyers generally get paid more than receptionists, because they have more skills. But that doesn't mean receptionists don't have any skills. If you're just sat there and don't do anything to visitors or the company, your boss will fire you. So if you don't have the skills to be a receptionist, you'll have to learn before you can work as one. So you'll add value to the company you work for, and get paid for it.

Exactly the same logic applies in online business. If you want to make decent money, you have to have the relevant skills.

Rewards programs never really pay, because you're not adding value as a job. 8-year old kids can answer surveys (pretend to be an adult) and view ads. So whenever you see an online job opportunity, ask yourself; could an eight-year-old kid do this job? If the answer is yes, then that's what it is. Don't expect to get paid for a job that children can do! 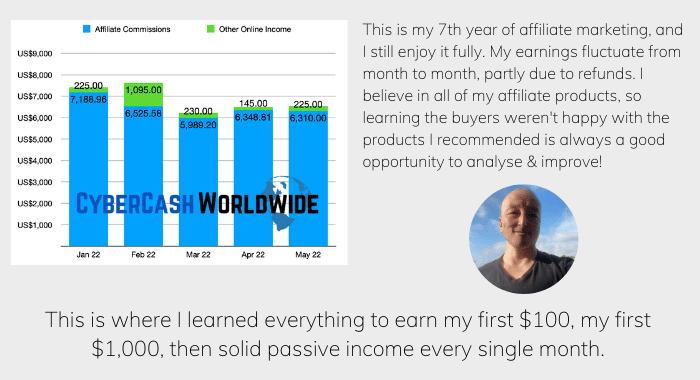