InfluencerCash Scam Review – Everything About It Is Fake

InfluencerCash.co is another fake reward program that claims to pay a lot of money for social-sharing and doing easy tasks. All it does is sneakily steal your personal data, and will not pay you a penny. If you come across this site or any similar sites and wonder if the offer is too good to be true, your guess is absolutely right. I hope my InfluencerCash review will help you understand why you should never trust any of those "easy money" programs. Nothing will come out of nothing. You'll waste your pointless effort only to receive no benefits!

To simply put - everything that's being said in InfluencerCash is fake. The slogan on the homepage "Start Making $200 A Day" is false because there is no source of money for you to make.

It claims to be an influencers' network, promising to pay;

You will see your "account balance" grow very quickly, which will motivate you to continue sharing the link on social media more and participating in more fake surveys.

The catch is, you will never be able to withdraw the money that's sitting in your account. Your withdrawal request will be ignored and your message to the support will be ignored. The site will eventually shut itself down and that will be the end of it.

There have been a countless number of similar sites such as CloutPay, ViralMarket, ReferralPay, etc. People who have fallen victim to these scams can do nothing but express their frustration on social media. 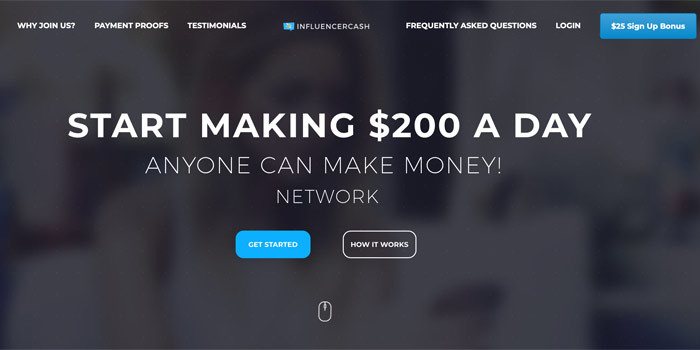 But Why Don't They Pay?

There are two reasons why they won't pay you.

#1 That's not how businesses work

This is something so fundamental. The FAQ says the money is "generated from ad-spend revenue and sponsorship products". You might simply think, ah, that's how it works, InfluencerCash is sharing the advertising income with its members...

But think twice there - who on earth would share their revenue with some strangers so randomly? Have any of the richest companies in the world or the most influential Instagrammers ever given out cash to their followers in exchange for signing up or sharing their link? No, they never do. No one in the world would throw money like that.

Imagine you run a business - any legitimate business - and made so much money. How would you use it? There would only be three ways;

You would never waste your money by giving out $10-30 for "barely a job". Sharing a link on social media is not a job. A surveys-for-cash scheme does pay money, but usually 15 - 50 cents per survey. Never as much as $30.

#2 They don't have money

What Are They Doing This For?

Their only purpose is to get as many users to join the fake survey/reward programs and give out their personal information (full name, email, phone number, street address and birthday) so that they can send you unsolicited emails, calls, texts, and junk mails.

Well, let's just hope that the worst that can happen to you is to keep receiving spams. For them to ask for your birthday is a real red flag, because why do they need it for? To send a birthday message every year, maybe. ("Happy Birthday! As a gift today, we'll give you a special discount on life insurance...") But if they obtain your birthday as well as your full address, they can use it for more malicious purposes. Such as contacting your bank pretending it's you, borrowing a huge sum of money using your name, etc.

Don't believe in the "payment proof" displayed in the homepage because you know, anyone can create a montage using a graphic tool. Testimonials are fake, for example;

The woman in the photo is a stock photo model, and the same model was used in KashTree, supposedly owned by the same scammer. The same photo, different descriptions. 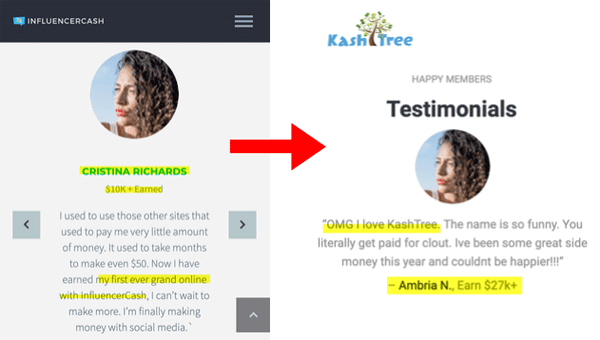 Some of the video testimonials may be created by the real members, because they're encouraged to upload a YouTube testimonial and say how much they've made so far. Upon submission, an extra $50 will be added to their account. They may have believed they had made hundreds of dollars at the time of submission. Little do they know is that they'll never be able to cash it. None of them has actually received the money, and none of them will.

The account manager "Jenny" is also fake - the woman in the photo is a model.

Who Is The Scammer?

The people behind this scam keep disappearing and coming back using the same platform over and over again but in a different domain name and different (fake) company name each time.

We can't track these people because they're technically not a scammer. They're not physically stealing your money - you're not going to earn a penny with them, but you're not losing a penny, either. Their 'crime' is not serious enough for the FBI or the police to investigate.

Why Are The Surveys 'Fake'?

They're all fake because they're offering an extortionate amount of prize "to win" in return. As I mentioned earlier, legitimate surveys don't offer a large amount of money to the respondents, otherwise people will start answering them purely to make money, and the research companies won't be able to get the true survey results.

Legitimate surveys should also be taken anonymously, while these spam companies exploit the users' full personal detail, the act of which is in breach of data protection regulations.

There is NO PayPal credit or Walmart gift card with a value as high as $1,000 to give away - they're making it all up to lure users into the data harvesting trick. Because if a legitimate company had such a prize in hand, they would use it much more wisely. They'd run a bigger campaign, which should be authorized by the sponsor, and they would make sure the prize will be awarded fairly. Not to some unknown users for answering a couple of meaningless questions via a scam site such as InfluencerCash.

"Signup bonuses" are always made as a form of discounts. Or cashback. Whatever the bonus amount is credited to your account, and it can only be deducted when you make your first purchase. Often the minimum-spend threshold is set, for example your $25 signup credit can only be deducted if you spend $75 or more on their products. Companies make sure their customers spend money. Nobody would give you a bonus AND let you cash it without spending any money on them. That would be crazy, and you know for that reason, InfluencerCash's offer is fake.

No Effort = No Money

I hope you understand by now that no company in the world would give away cash for something that you've never worked on. If you've already spent days on InfluencerCash trying to 'earn' money - what you've been doing is barely a job's worth.

If you work for a company as an employee, you get paid for providing "your value" - helping the company make money. If you work for yourself (both online or offline), you also get paid for providing your value - helping customers/users/followers. What you've been doing with InfluencerCash is not providing any value, you see what I mean? You may have spent a lot of time on it, but you didn't put any real efforts to create money.

If you want to create your own system online and let it earn passive income online as I do, the only way is to start learning the technique and keep working on it. It won't happen overnight - nothing will. But when it happens the reward will be immense. Join me if you're interested in making money online as an affiliate.

Simple Geography Quiz For You!

Simple Geography Quiz For You!