If you're checking my GoEarn.co review because what the site offers sounds too good to be true... Firstly congrats to you, because your guess is absolutely right. Everything that's being said on the GoEarn site is untrue. Yes, everything. Top to bottom. There are hundreds of similar (or identical) scam sites, and the users tend to get carried away as they witness their "account balance" increase. "I got paid!!" ...No, you haven't actually got paid, and you never will, not a single dime.

My GoEarn.co review will explain two things; why you shouldn't trust any sites like this, and what you should really do if you are seriously looking to make money online. The last thing you want is a false hope that keeps wasting your time. Stop daydreaming, and start working on the real techniques.

GoEarn.co claims that it's #1 "earning network", offering the best way to start earning money online, and claims to have paid out over $44 million to this date... Well, as I just mentioned, every single line on the homepage is untrue. When you closely look at it to find out where such big bucks come from, it's never explained anywhere. Phrases such as "earning network" and "paid out" don't make sense on their own.

The truth is, GoEarn is a data harvesting scam site. Its only aim is to get you to take as many surveys listed in the "Task Wall". Each time you complete a survey, you're required to submit your personal detail (address, phone number, email address, etc.) which will be sold to third party spam agencies. It means sooner or later, you'll start receiving unsolicited emails, nuisance calls and texts.

GoEarn's aim is to sell as many people's personal data, so it also falsely offers to pay you for referring your friends and social followers.

To make things look real, GoEarn asks you to choose a preferred payment method upon signing up; via PayPal, CashApp, Bitcoin, or Venmo. Whichever option you choose, you'll never get paid. When you actually send a withdrawal request, it will refuse to pay by saying your activities are found to be inauthentic. It will cancel your GoEarn account and your "earnings" will be gone. That'll be the end of it. 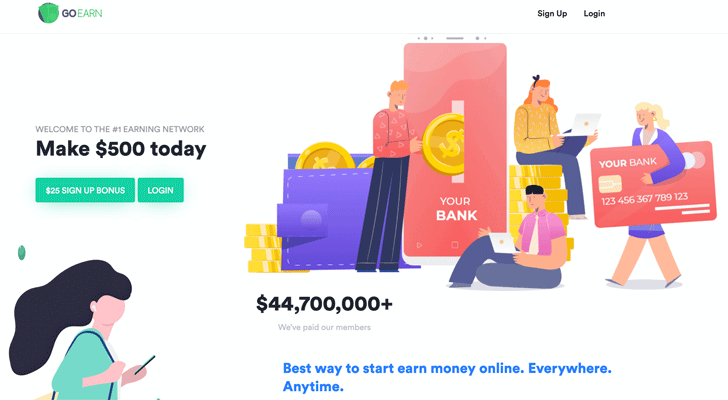 How Do I Know You'll Never Get Paid?

I know you'll never get paid by GoEarn.co because I've seen numerous identical sites owned by the serial scammers. They all target new users - primarily teenagers. WiredBucks, Earn2Flex, FameCash, InfluencersEarn, Paid2Share, CashGem...There are too many to list up, and all of them have almost exactly the same format, display fake offers in the same way.

If you search these sites by name on social media, you'll find many complaints. None of the users have been paid, and all of those who have "requested to cash out" have been blocked access.

But Some People Say They've Made Money...?

At the point of sharing the link, they don't realize the amount they receive is not the real money. Most of them will not realize they've made a mistake until they actually request to "withdraw cash" and get callously refused!

GoEarn won't pay you because they're not making enough money to pay you! The only income they receive is from the spam advertising agents, listed in the Task Wall. This is how it works;

That's all GoEarn makes. How can they pay you $30-$65 every time you complete a task, when they only receive no more than $2? 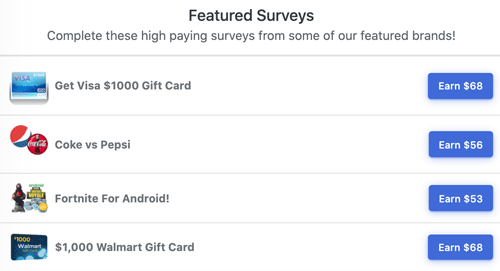 How Do I Know The Surveys Are Fake?

The "surveys" in the task wall are not real surveys... The questions are all silly, like "how many times do you shop in a week?" As I explained earlier, they're just there to get you to submit your personal information.

They are fake BECAUSE they ask your sensitive personal information - full name, exact address, phone number, and so on. Legitimate surveys never ask you that.

I tell you what, real, legitimate surveys are run by research companies, right? They may ask what age group you are in, or your living situation...rented or owned property, kids, current household income...and things like that. But they never ask anything personal for two reasons;

Okay, apart from the personal data, there's something else that legit survey companies never do - to offer such a great reward. If they offered such fabulous rewards like gift cards, people would start to answer every question just to grab the reward for free. Survey companies want accurate, genuine answers from as many "real" people, not from freebie-grabbers, you see what I mean?

Well, the homepage says that GoEarn.co has paid its members $44.7 million but towards the bottom of the same page, it also says it has 730,000 members and has paid over $158 million. So the claims are inconsistent there.

GoEarn also says "Our parent company has been creating online monetizing solutions since 2010."

First of all, I can tell you that GoEarn.co is just a brand new website, copied from other scam sites and newly built a few weeks ago; June 2020. 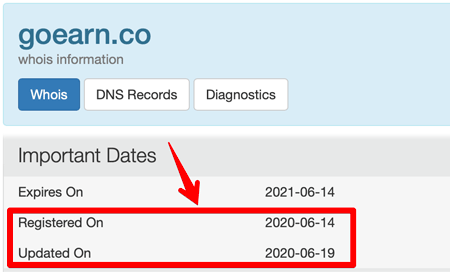 Secondly, which one is the parent company? It never explains. And thirdly, what are "online monetizing solutions"?

Nothing. There's no such thing. This phrase is targeted at people who are "inexperienced internet users" who somehow believe that there are some unknown secrets to generate money online. Online businesses are no different to offline businesses, you see. If you open a pizza restaurant business, you won't call it a "monetizing solution", you'll call it a restaurant/catering business. You serve food to customers.

GoEarn doesn't even explain what kind of "monetizing solutions" it's referring to. It doesn't explain anything about the business - because it doesn't run a business, apart from the affiliate commission that it receives from the spammers. 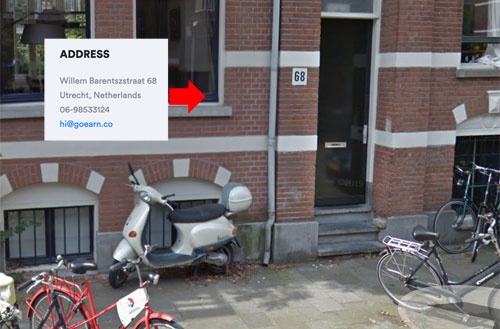 Now the street address displayed in the GoEarn homepage - "Willem Barentszstraat 68, Utrecht, Netherlands, 06-98533124" - is fake. If you check that on Google Maps, you'll only find a residential property with a few bicycles parked in front of the door. In fact, the same address was displayed in CashGem, which means at least these two sites are owned by the same scammer.

But on the terms page (https://goearn.co/terms) displays the "official" company and the contact address as; GoEarn, PTY, Melbourne, Australia; Attention: Customer Service. According to the Australian company registration database, there was a company called GoEarn PTY Ltd, which was dissolved in 2016. I can't get any more information and don't know if it's related to this scam site. But many other similar data harvesting scam sites claim that their registered company name is PTY and it's been registered in Melbourne.

"Matthew Young", who claims be a big-buck earner once again, misleads new users by saying anyone can make money with social media without having a big account. Well, he's not a real user - it's just a stock photo.

Two Things That You May Have Done "Wrong"

If you've already signed up with GoEarn.co (or any other similar sites) and recommended it to your social followers by sharing the link... I tell you 2 things that you've done wrong.

People who have promoted GoEarn.co or any other similar scam sites - all of them, 100% of them - say "I've made X dollars in the past X days! (So you should join me too.)" That's where it's wrong.

You're not making good success while you're stuck with the idea of "make money for the sake of money, never mind what it involves". What it is to get paid, is a result of providing something of value...something meaningful to someone other than "making money" itself.

I'll give you an example. There are millions of businesses across the world, right? They all provide either (a) products and/or (b) services...and make money, right? You go out on the high street and see all sorts of shops, restaurants, lawyers' offices, supermarkets, etc.

But you've never seen a premise that lets you make money, have you? If one day, you found a new shop down the road that just says, "we'll let you make money!" what would cross your mind? Would you simply think "that's awesome"? Or would you like to know how that could work? Then that's the point No. 2...

2. Not Checking Who Pays For It

Before you shared the GoEarn link, you never checked where the money may be coming from. Where someone makes money, there's always someone who pays for it - simple, right? When you see a site like GoEarn, you should always come up with questions like the following...

If all this was true, all the unemployment problems would be solved on a global scale. It would be impossible, you see what I mean?

Can You Really Make Money with Social Media?

Of course you can, but not that easy. Sharing a link to a website is something that billions of social network users do. It's never a "job", and you'll never make a cent just by randomly sharing a link. And when a link destination is a scam site like GoEarn.co, you'll end up losing trust by your followers. It means that you'll really have to know well enough about the product or service that you're promoting.

People who make money with social media may sell their own brand goods, and big-buck influencers may be sponsored by famous brands, but the majority of them make money as an affiliate - they recommend products that they truly believe to be useful to their followers. And they receive a commission from the brand when the followers purchase the product. Amazon offers an affiliate program that is open to anybody. ClickBank is also an affiliate network that pays good commission rates. The following articles may be able to help you start making money as an affiliate, either via social media and also by building your own website;

If you want to learn more about affiliate marketing and start building your own website, join me free from the link below. We'll take you through.

3 Step Method Review – One of the Worst!

3 Step Method Review – One of the Worst!