Earn2Flex Scam Review – Nobody Gets Paid!

There have been so many scam sites that claim to pay a lot of money such as $30 for answering a survey, $50 for creating a YouTube video... Now more people realize such offers are too good to be true, Earn2Flex is trying to be a little discreet - just by reducing the value of rewards. Well, the "rewards" are still fake, it's never going to pay you a penny. Read my Earn2Flex scam review, particularly if you're looking to make money with surveys-for-cash programs, this is another bogus scam that you should avoid at all costs.

Earn2Flex is one of many data harvesting scam sites, primarily targeting new (teenage) users. Its only purpose is to collect personal data from as many users and sell it to third-party spam agencies for money. It offers fake rewards for completing ridiculously easy tasks such as answering surveys, installing an app on a smartphone, etc. The monetary "reward" will be added to the user's Earn2Flex account each time they complete a task, such as;

To complete a survey or install an app, users will be asked to submit their personal information first (your full name, email address, phone number, street address, date of birth, and so on). The majority of new users are happy to give out their information in exchange for $5, and that's where the trick is.

They carry on completing "surveys" and keep referring friends and followers to Earn2Flex, as their "account balance" increases each time. Unfortunately nobody gets paid - when they request to withdraw cash, their request will be either ignored completely or disqualified. Soon their access to Earn2Flex will be blocked, and that'll be the end of it.

The users' personal information will be sold from one spammer to another, which means sooner or later, the users will start receiving unsolicited emails, nuisance text messages, and cold-calls. 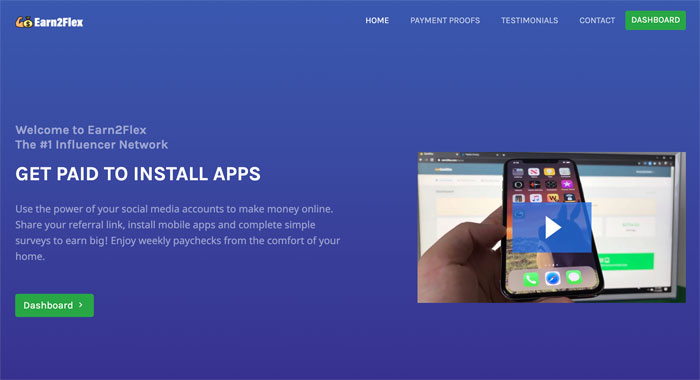 How Do We Know It Will Never Pay?

We know it because there have been hundreds of similar (almost identical) scam sites. Earn2Flex is actually a mirror site of Reward Dollars, which in turn is a mirror site of EZBucks, MoreCash, Social Bounty, and so on... None of these sites have paid a single dime to the users, and they've all been created to sell the users' personal data by offering fake rewards!

Earn2Flex claims that it was "founded in 2016" and it's been paying "real cash to millions of members for many years" as if it's a real company. But this very site "earn2flex.co" was only created in February 2020 and updated in April. So you can see it's not telling you the truth. 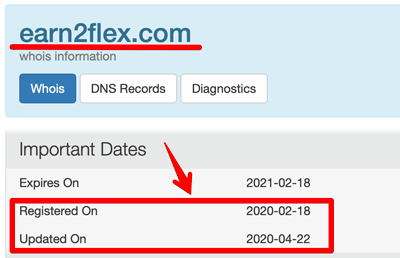 The address that's shown on the site is also fake - "Cotesfield" is a village in Nebraska, and there is no "Rollins Road". If you check that on Google Maps, you'll see that there couldn't possibly be such a company in the middle of nowhere.

Earn2Flex also says, "we deliver proven results to our advertising partners", and not much else. It doesn't explain how it runs a profitable business.

You know, some industries are more interesting than others to the general public... Imagine you and I are having a conversation and I tell you that I own a restaurant that makes millions of dollars each year. You would probably ask questions like, the name of the restaurant, what kind of food I serve, and why my restaurant is so popular, wouldn't you?

Now imagine I tell you that I'm an advertising agent, making millions of dollars. You would probably say "wow", but you wouldn't have much to ask me, like successful advertising techniques, would you? Unless you work in the same industry.

Earn2Flex displays a few company logos on the homepage - Burger King, Wendy's, Dunkin Donuts, and Fortnite (which is an odd one out because Fortnite is not the name of the company) as if they are the "advertising partners". It expects no one to question what kind of advertisements, where they appear, and in what kind of capacity. Of course, the information is all fabricated. The company logos (Burger King, etc) are all taken from Wikimedia Commons and simply displayed on the site, they really mean nothing.

So How Does Earn2Flex Make Money?

As I mentioned earlier, Earn2Flex sells your personal data to make money. "Task Wall" is where fake advertising agents steal your data - offering rewards such as "$1,000 Visa gift card", "$100 Starbucks gift card" in exchange for completing a task, but none of them is really a task. They all pretend to give survey questions and ask your full personal detail.

Earn2Flex works as an affiliate to these advertising agents, and every time you complete a "task", it receives a very small amount of commission (usually $1-$2) from the agent. That's all it does.

It may appear as if you'll receive a gift card from the ad agent AND $5 from Earn2Flex every time you complete a task...but how can Earn2Flex pay you $5 when it only makes $1-$2, you see what I mean?

And needless to say, these gift card rewards don't exist. If you think you have the slightest chance of receiving something in the post, you'd better forget it. It's all falsely offered as a bait to get you to give out your personal detail! 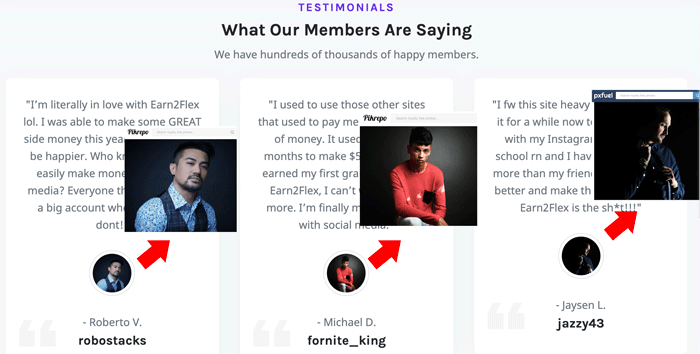 The testimonials section is tagged as "What our happy members are saying", but they're all fake. All the 3 photos are royalty-free stock images and, the Earn2Flex owner has used the same images in the other scam sites. Obviously, the words are not quoted by the "members", they're just made up.

I hope you're guessing by now that the "payment proofs" shown on the homepage are also all fabricated. Anyone can easily create these by collaging different screenshots, images, and text by using free graphic software.

The Earn2Flex homepage tells you as if online surveys are the way for you to make money, and that's grossly misleading. It says things like;

"Large companies and brands are always interested in what their consumers have to say. You will help companies create better products and services by voicing your opinions while earning real cash."

Yes, companies/brands are always interested in consumers' opinions. But not via a platform like Earn2Flex, because they need true opinions from genuine consumers. Not from some random people who are looking to make money by giving opinions, you know what I mean?

In other words, surveys are not designed to pay decent money. Okay, imagine you are 17-years old male student, desperate for some money. One survey says it pays $5 if you answer questions about pregnancy...or retirement life... You could pretend to be pregnant or retired and make up an answer to the questions if you wanted to. If they offer to pay a decent amount of money, they won't get genuine survey results, because it will only attract people who are looking to make money with surveys.

Earn2Flex says "our members can usually earn a few hundred extra dollars a day by answering surveys" - not true. Earn2Flex will not pay a cent to start with, and no one can make such a great amount of money via any legitimate reward programs, not even from well-known sites such as Swagbucks or Clixsense.

So What Have We Learned From It?

Well, according to Statista, there are 3.08 billion social media users worldwide in 2020. People "share links" every second and answer survey questions night and day. Even children can answer surveys as long as they can read. You see, what Earn2Flex falsely offers is not a job's worth. Nobody pays money - real cash - just for sharing links, you see what I mean?

If you stop and think about how a business runs, you'll easily understand this logic. If you want to get a job locally, you'll first send a résumé to an employer. If you're shortlisted, you'll be attending the interview as a candidate. You'll only be hired if the employer thinks you're the right person.

It works exactly the same way online. Nobody in the world will randomly pay you such good rates for doing something that anybody - even children - can do.

You know, the only way to make a decent income online is to run your own business. If you have a particular skill, you can advertise it on sites such as Fiverr and Upwork and people may hire you. Otherwise, starting your own business is not as hard as you think. In fact, anyone can start right here, right now.

Affiliate marketing is the easiest way to start - NOT easy to make money, nothing's going to happen overnight, because you'll likely to have to build a website and need to learn digital marketing techniques. But anyone can become an affiliate with very little initial investment, promote products on a website and receive commissions from brands.

Building a website doesn't require technical skills. In fact you can have one built literally within 30 seconds, then you'll start customizing it to make it your own. If you are interested in writing blog content and monetizing it, join me free from the link below. We'll take you through. Any questions, don't hesitate to leave a comment below. Good luck!