FameCash Scam Review – Why Others Say They “Got Paid”

Don't believe anything that FameCash.co tells you. This site is an exact copy of many other scam sites created to steal your personal data and sell it to make money - make money for themselves, not for you. You'll never receive a penny, and you'll only be wasting your time. Today FameCash scam review will explain how every single piece of information in this site is fabricated, and also explain what you should be looking for if you're seriously looking to work and receive passive income online.

FameCash is a scam that targets inexperienced internet users, mainly teenagers. It claims random users to pay a ridiculously high rate of commission for barely doing a task, such as;

If you take a look at the site a little closer, you can tell the whole idea is too unrealistic to believe. and It's easy to spot that FameCash itself is NOT generating enough money to pay such high commission rates to the users. But new users often take everything that's being said literally and fall victim to the scamming technique. 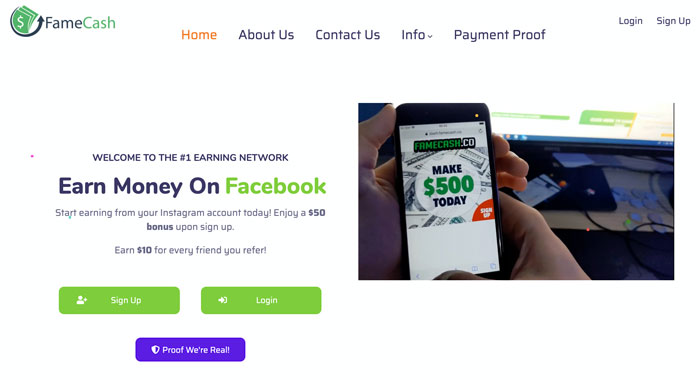 You'll Never Get Paid - What Does This Mean?

Simple. They'll just invalidate your payment withdrawal request and cancel your account. Typically, you'll receive a message like this;

"While attempting to submit your payments, out system has deemed some or all of your stats to be unauthentic. Due to that, your payment has been canceled and your account is pending termination."

That's exactly what the scammers do with their previous copy sites - OGDollars.co, Paid2Share.co, CashForShare.co, JustEarn.co, ShareToEarn.co, CreateBucks.co, CashCrates.co, EarnAndGo.co to name a few. They're almost identical and it's assumed that these sites have all been run by the same scammer (individual or syndicate).

Why Do Some People Say They Got Paid?

Each time a user completes one of these "tasks" that I mentioned above, the amount will be credited to their FameCash account accordingly. Some of the users simply believe that they've been earning money just by looking at their account dashboard.

Some users post a comment on social media saying "I've got paid!" for two obvious reasons. One is that they haven't actually got paid but they believe that their commission income is secured. While the other reason is just to get others to join in. Every time someone joins from the link, $10 will be credited to their FameCash account. They have no problem telling a fib in order to make extra $10, "I just got paid $500! Join me and make easy money from the link here ==> https://famecash.co/..."

Again, they're totally wasting their time. Any money that they "make" is only within their FameCash account. They'll be never able to cash any of it.

They Sell Your Personal Detail

FameCash's only aim is to send as many users to the Task Wall. Every single "tasks" listed there is not a task, but a fake reward offer, such as $1,000 Walmart gift card, $1,000 prepaid Visa card, $100 McDonald's gift card, etc. None of them explains what you're supposed to do. When you click to start any of the "tasks", you'll be directed to a fake reward site, run by an illegitimate advertising agent.

Once your full detail's been submitted, it'll be sold to third-party advertising agents and sooner or later, you'll start receiving unsolicited emails, nuisance texts and calls.

What's scary is that some of those advatising agents work individually and sell database in a CSV file for as low as 25 cents per data - I've seen someone sell it in the past - the database is not password protected and frankly, they don't care about data protection laws. So there is a chance that your personal data is passed to wrong hands to use for malicious purposes, such as try to access your bank account or borrow a large sum of money in your name and get you into debt without you knowing.

For that reason alone really, I would strongly advise you not to participate in fake survey-for-rewards, where they offer items that are valued unrealistically high. Nobody offers a gift card valued as high as $100-$1,000 just for sparing a few minutes answering silly questions. And if it's a prize competition, it shouldn't be offered to random people this way. Most definitely fake - there is no winner.

FameCash claims to have started its "business in 2015", partnered up with brands such as Walmart, Papa Johns, and Subway in 2016, and claims to be "an established affiliate network whose name is recognizable all over social media". The scammer tells the same story in many other mirror sites, and the story is totally fake. Because the site FameCash.co only opened in May 2020.

In the "Contact Us" page (https://famecash.co/contast-us), it says the company address is Koningin Beatrixstraat 46, De Lier,Zuid-Holland 2678 EE, Netherlands. Just copy this address and check it on Google Maps, you'll find some residential street of the Netherlands. And you won't find No. 46 on this street.

However the Terms & Conditions page (https://famecash.co/terms-conditions) says something totally different. The company address is "Famecash, PTY, Melbourne, Australia." Such a company name cannot be found in the Australian company registration database. So this proves that the company never exists.

The man who appears on YouTube to leave a FameCash.co testimonial is an actor, hired via Fiverr. Quite a few people have left a comment, assuming some are the insiders and others still blindly believe that the site is real.

The people who appear to leave a testimonial on the FameCash site are also all fake; this entire section's been falsely created and used over & over again on multiple scam sites that I mentioned earlier. Likewise, the images of PS4, Macbook, iPhone "sent from the affiliates" as if they've been rewarded by FameCash can be easily created using graphic software.

If you stop and think about it, you know how ridiculously fake all this is. There are millions of affiliate marketers worldwide, right? Including myself. We all thrive to learn relevant techniques to recommend products to our social followers and site visitors. And only if someone buys the product that we recommend, we receive a percentage of the sales price.

Apple MacBook costs $1,300, and for someone to be rewarded that kind of high-value item as an affiliate commission, that person would have to work hard to help the company generate tens of thousands of dollars worth of sales. Sharing an affiliate link on social media here & there and completing silly little surveys is not a job. You wouldn't deserve a monetary reward for doing something that's not a job's worth, see what I mean?

Ok, if you're looking to make money online from home, you need to work a lot more seriously and to work more seriously, you need to learn the techniques. You must know by now that the online business industry is extremely competitive, that's only because it's easily accessible to anyone who has access to the internet (practically everyone!)

Too many people are trying to make money without building knowledge, and because they have no basic online business knowledge, they believe scammers' silly little tricks and fall victim to sites such as FameCash.co.

The least you can do to work online for real is to start learning the skills. The skills are not necessarily difficult but the basics include;

If you'd like to start building your own website and make a living from it like I do, join me from the link below. Everyone's trying to catch up with the new way of working without relying on employment. So you'd better start, and the time is now. Good luck! Join me to get started NOW!
Previous
Next