CashOG is a new scam site, pretends to be in the business for many years and claims to be "the #1 influencer network", but in fact the site was opened in July 2019. It makes a false claim to pay you $10-15 just for referring on social media, but its only purpose is to collect users' personal data and sell it to illegitimate advertising companies, a.k.a. "spammers".

I hope my CashOG review will help you understand what you see in websites like this is never what you get, and also help you spot such red flags in the future.

CashOG incentivizes users to participate in fake prize draws, named "easy tasks", run by third-party spam companies. They use fake winning prizes such as shopping vouchers, game consoles or smartphones as bait to trick you in engaging with bogus surveys.

The whole thing may sound attractive because (a) you have a chance to win a prize and (b) upon completion, CashOG will "pay you" $30.

Before you enter each prize draw, you'll be asked to give out the full personal detail including full address, phone number and email address, all of which will be sold to other companies. You know the consequences - you'll end up receiving a lot of unsolicited mails, cold-calls and text messages.

There are no such winning prizes because all the prize draws are fake. They say "the winner will be notified by email", that's it. Majority of them don't even display terms and conditions, and if they do, they're just a standard template.

More importantly, your cash rewards. You may be excited to see $30 added to your CashOG account each time you complete a "task" and $10-15 added each time you refer it to someone on social media. It's pretty easy to "earn" a few hundred dollars within a day, or "$500 Today!" as advertised.

Unfortunately you'll never receive a penny. Your cash withdrawal request will simply be ignored. If you persistently send messages to the support and complain, your access will be blocked. That's what's happened to all the previous users of similar scams such as ViralPay, ReferralPay, MVPBucks, CloutPay, etc.

Is It Really #1 Influencer Network? 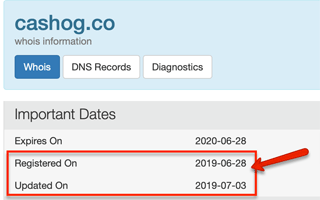 CashOG claims to have more than 300,000 members how have earned 44 million dollars, owned by CashOG, Pty Ltd in Melbourne, Australia, and has been in operation since 2015. It also claims to have coverage in the media such as Forbes and Fox News.

None of this is true - the claim can be proven to be false by the following three easy searches.

The name CashOG is not found anywhere.

Testimonials add credibility to business - one of the most effective ways to convince new users to join in is to get the existing users to speak out. Unfortunately testimonials can pretty easily be faked. Scammers hire actors (spokespeople) from Fiverr.com for $5-$10 and get them to say whatever they want them to say in front of the camera.

Written testimonials can be totally made up, and there are thousands of royalty-free images. Unless the contributor's profile is clear, a testimonial is not always trustworthy, sadly.

Here's something you can remember - not only this particular site, but if you see a big prize competition in the future, try checking the winning prizes are real or not before participating. What you can check is the value of the prize.

If the value is fairly small, say $10 shopping voucher, there may not be a disclosure. But if a prize is more valuable and attractive ($500 Amazon gift card, or a brand new Samsung Galaxy, for example) the competition should be sponsored by the prize contributor. It should say "this competition is sponsored by Amazon/Samsung."

Because it's extremely unlikely that any competition host companies buy gift cards, electronic devices etc, and give out to the public so randomly. The brands (e.g. Amazon, Samsung) don't easily allow companies to do that either. So prize competitions with big prizes but without the sponsorship disclosure are likely to be fake.

Another thing is how competition or survey collects your personal data. By Data Protection law, companies - any companies - should not be collecting general public's personal data more than they need. In case of a prize competition, all they need is each participant's email address, you see. They only need to pick a winner first, then contact each winner by email and ask for their full name and street address so that they can send the prize by post.

For that reason, if a prize contest starts by asking your full data - we can assume that it's 100% fake. Don't bother joining in!

Never Give Out Your Personal Data

You may be just lucky if you only suffer from receiving spam emails, texts, cold-calls and junk mails in the post. You never know who your personal data will be sold to and how many of them are along the line - they can potentially use it for rather malicious purposes, e.g. open credit accounts in your name, take up insurance in your name, etc. To avoid that, never give out all your personal data unless you know it's absolutely necessary.

If You Want To Make Money Online...

By now you know there's no easy way to earn money like CashOG falsely offers. If you want to earn money online, you need to work for it, and there are really, two ways;

Whichever way, you need to be willing to use an adequate amount of time to learn it in the beginning.

Affiliate marketing allows you to earn online income without having your own products to sell. If you are interested to put your effort and learn to make $6k or more every month like I do, join me from the link below. Any questions - don't hesitate to leave a comment below!