MVPBucks is another scam site, claims to pay you $25 just for signing up, $10 each time you share the link on social media and $30 for doing an easy task. The site only exists to sell your personal data, and it will not pay you. If you've just realized this is a scam, or you still aren't sure and feel bamboozled it all, I hope my MVPBucks review will help you understand how things work (and this thing doesn't work!)

Not only should you stay away from this particular site, but any other scam sites just like MVPBucks who offer similar cash payments.

MVPBucks is affiliated with advertising agents who offer people to enter fake prize competitions without due diligence. These agents ask users to "do some easy tasks" such as to answer surveys and try out new apps in exchange for a chance to win a prize.

To enter a prize draw, users have to give out their personal information - full name, full address, phone number, email address, birthday - all of which will be sold to third-party advertisers.

The winning prize is something of fairly high value - a shopping voucher, smartphone or electronics equipment, to attract as many participants. But these prizes are fake in most cases because the offers are not authorized by the brand and the terms & conditions are not properly set out.

MVPBucks is affiliated with them, means each time a user completes the task and gives out their personal data, MPVBucks will receive a small amount of commission. 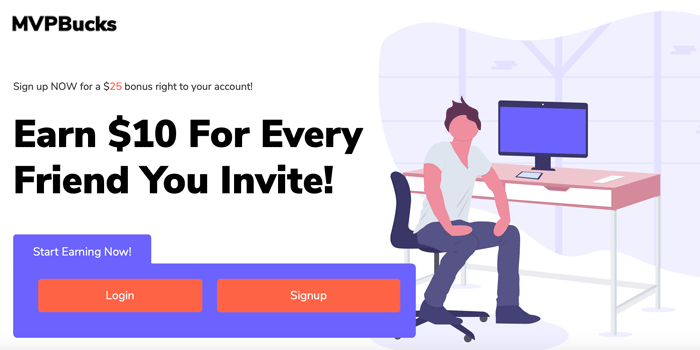 They Will Never Pay You

Just by signing up, your MVPBucks account will be credited with $25. Each time you get your friend to join, your account will receive $10... It's pretty easy to earn over $100 within the first couple of hours.

As soon as you sign up with MVPBucks, it will urge you to fill out your payment preference - by PayPal, CashApp, Bitcoin or Mailed check.

So will they send you money using one of the 4 methods? No. They won't. They'll never send any money to you! MVPBucks will simply not pay. Your email message to them will be ignored. If you message them on Twitter, they'll simply block you.

Why don't they pay? Because they can't pay. They don't have money!

As I explained earlier, MVPBucks is just an affiliate. Each time you complete a task, MVPBucks will only receive $1-$1.50 from the task agent (i.e. fake prize competition offerer). I know this because some affiliate networks advertise it. Yes, that's all they get. But they promise to pay you $30 each time you complete a task. How can they pay you $30 when all they receive is $1.50? They can't. It's impossible.

When you sign up, your name and email address are saved in MVPBucks's database. They can sell it to third-party traffic advertisers for around $0.20 - $0.50 each. Again, in order for MVPBucks to pay you $25 just for signing up, they'll have to sell your personal data to 50-150 advertisers. That won't be easy. MVPBucks is not earning enough to pay such large sums of money.

I hope this makes sense - so why do they lie? Because they're a scammer!

Run By The Same People

The Help page of MVPBucks is just a copy taken from Clout Pay - obviously run by the same people (or person). There have been many similar sites such as Referral Pay, Viral Pay, Notion Cash... These sites all have the same format.

You Know You've Never Earned It

I've seen some users upset, and my heart goes out to them. Some of them say that they're determined to do whatever it takes to get their money from this company.

Unfortunately they can't. You can probably sue them if you know who the people behind the scam are, but you cannot get them to pay you whatever you 'earned'. Because the amount is not at an arm's length. The jobs you've done are not worth hundreds of dollars, you see what I mean?

Imagine I ask you to share my website on social media, and I promise you to pay $10 every time you share a page. You share 10 of my webpages in a matter of a few minutes. I owe you $100, but I refuse to pay, which makes me a big fat liar, no doubt.

But if you sue me, the court will unlikely to order me to pay you the $100 you've 'earned'. Because sharing something on social media is not considered as a job that's worth $10. It's barely a job. I haven't stolen your money, I'm not a thief. Although I'll be branded as a scam and my reputation will be doomed.

This is just an example - in real life, the court might order me to pay compensation to you and they also consider my financial circumstances, etc. But anyway this is the principle. Promising to pay you $25 just for signing up is like promising to pay $1,000 per hour to a receptionist. It's not at an arm's length. If it's too good to be true, it most definitely is.

They are liars, if you feel you've been deceived, I know how immensely frustrated you must be. But you don't know who they are. Don't waste your time trying to get your "money back". There's nothing you can do except to move on, and stay away from any similar scams in the future.

Now You Know How A Business Works

By now, you know how things work - by signing up, sharing the link and doing a few easy tasks, you're only helping MVPBucks make a few dollars. It's impossible for MVPBucks to reward you with $10, $25, $30 each time - there's no money.

In every trading or incentive occasion - if someone offers you some money, that's because you help them make money. They make money because someone else is paying for it behind the scene, i.e. customers.

This is pretty obvious, isn't it? Money doesn't appear from nowhere. Getting paid online is just like working on commission in a shop. You sell stuff to a customer, but you don't make money - it's the shop who makes money. But as a reward, the shop will pay you a commission; a percentage of the sales price.

That's the ONLY way you can make money online.

Of course, there are some easy jobs, such as answering a survey. But surveys-for-cash schemes can pay you a few dimes. Because such easy jobs are not worth paying you more than that.

If You Want To Work Online Seriously...

You can earn passive income as an affiliate by blogging. A niche affiliate marketing is where you promote products on behalf of a brand and receive a percentage of the sales price. You can promote as many products and as many brands as you want on your website.

You don't intrude anyone's life. No hard-selling, no networking. You can choose to work at any time you want. But nothing will happen if you're not willing to invest an adequate amount of time each day.

If you are at it regularly and put in as much effort, you can earn more than $5k every month as I do. Join me if you're interested - remember, you'll never make decent money by doing some 'easy tasks' anywhere on the internet!

Does Introvert Extrovert Mean To You (Huh???)

Does Introvert Extrovert Mean To You (Huh???)

How To Avoid Online Marketing Scams

How To Avoid Online Marketing Scams