MoneyChaser is a "fake" influencer network, whose sole purpose is to sell users' data to illegitimate marketing companies. It claims to allow the users to make $500 on the same day, but it will never pay. The terms and conditions page (stupidly) confirms that the site is owned by the scammer who also owns CloutPay, who has notoriously deceived many users.

My MoneyChaser review will explain why should not be involved to avoid wasting time and protect your personal data.

MoneyChaser draws the attention of innocent new users by making fake promises to pay a lot of money for completing easy tasks. $25 just for signing up, $10 for referring a friend and $30 every time they complete a simple "task".

Firstly it encourages you to share the link to MoneyChaser on social media. As soon as you share, you will "earn" a few dollars. You see your MoneyChase account balance increase so quickly, you'll then be motivated to start doing the "tasks".

After you send a withdrawal request, you'll have to wait for 30 days.

After 30 days, this is what happens - simply, you'll never receive your money. You hear nothing from them, so you send an email to MoneyChaser. Your email will be either simply ignored or returned undelivered. Or if they reply, they'll bring up a fake excuse (experiencing a system error, for example) and ask you to wait some more. So you wait some more to receive no further response. If you make a complaint to them, they'll block your access.

You won't be the only one. Other users will start to complain across social media. When enough number of people have expressed outrage, MoneyChaser will shut down the site, come back using a different website name and scam more people using exactly the same tactics.

...How do I know all this? Because that's what's happened to CloutPay, SwagPay, InfluEarn, CashLoad and many other sites, all owned by the same scammer. 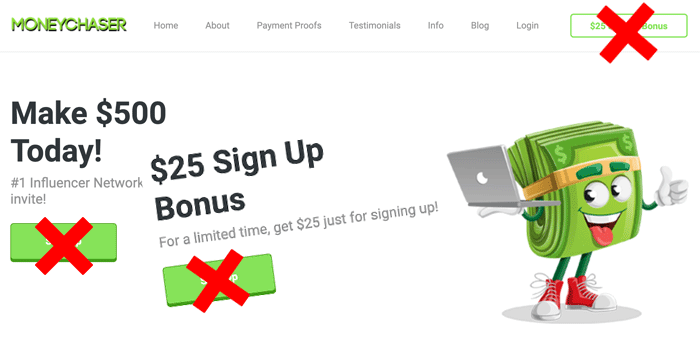 The "tasks" are mainly fake surveys and prize competitions. How can you tell they're fake? Because they ask you to give out the full personal information before anything starts - email address, full postal address, cellphone number, birthday as well as your full name.

Okay, you might know this already, but if you don't, here's something you should remember. Data protection laws vary from country to country, strictly speaking. But the basic principle is universal.

These fake surveys/prize draws ask your full information including street address, and you might fill out without questioning. So that they can send the winning prize to you!

If a prize draw was real, run by a legitimate company, they would not need every participant's postal address, or even the name. They could only email the winner after the draw and ask their full information.

If you ever try some of these fake surveys, you notice that they're usually never-ending. Their survey (!) question can be "Are you interested in receiving a $100 KFC voucher for free?" and regardless of your answer - yes or no - a new survey pops up, start asking for your full personal detail once again.

Needless to mention - these prizes don't exist. These illegitimate spam companies create expensive fake prizes such as "Win a brand new iPad", unauthorized by Apple, just to lure you in to get as many users' data. "The winner will be notified by email" is all they have to say, so nobody knows who's won. Because there is NO winning prize. 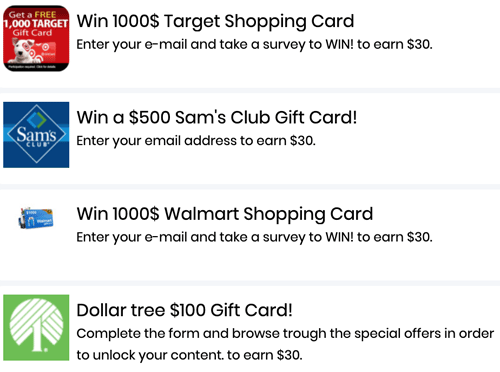 MoneyChaser can't pay simply because there's no money. It's not earning enough money to pay you. Here's how it works. These "tasks" are not run by MoneyChaser. It's only letting the third-party survey/reward companies use its space. And every time a user completes a survey (i.e. gives out their full personal data), MoneyChaser receives a very small amount of commission from the reward company, usually $1-$2. No more than that.

That's all MoneyChaser earns, then how can it pay each user a whopping $30 every time? It's impossible. Same as "$25 for signing up" - you know how unrealistic it would be.

Although the FAQ page says MoneyChaser provides "straight transparency" to its members, it doesn't explain how it works. Well, it can't explain it because this whole crazy idea itself doesn't make sense.

Even if MoneyChaser did have money, throwing it away like this instead of donating for a good cause would be unethical, and would not be tax efficient as a company. Really, the whole plot is impossible. 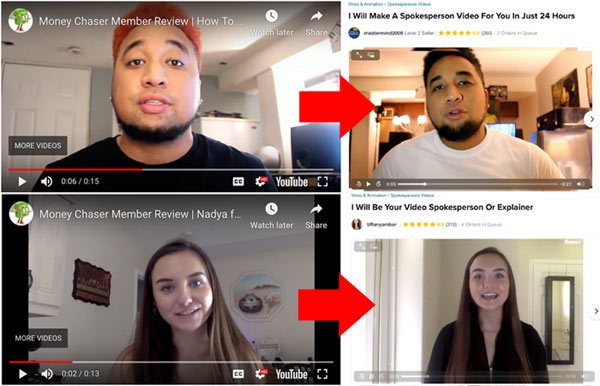 You may have guessed it by now - that the testimonials are fake. These people are paid actors on via Fiverr.com. They say anything that they're told to say in front of a camera for a mere $5.

They have already appeared in numerous video testimonials for various other scam products to say "I've never made so much money in just one day in my entire life! Thanks to XYZ (the name of a scam product), now I can quit my job!"

I kind of feel sorry for these people, they may not be aware that they're actually indirectly scamming thousands of people by making false statements.

As I mentioned earlier, MoneyChaser is owned by the scammer who also owns CloutPay. The terms & conditions confirm this. If you go to Facebook or Twitter and search by the word "cloutpay" - you'll see how many people have complained so far.

If you've already signed up with MoneyChaser and feel you've been scammed, I'm sorry for you, but I'm afraid there's not much you can do apart from moving on. At least you know how this type of scam works, so you can stay away from any similar sites in the future.

Don't bother trying to get "your money" - because you haven't actually earned it. Think about it, all you may have done is sharing the link and entering some fishy prize competitions. That's barely a job in the real world. Consider it was some toy play money, cash value of zero.

Some people still believe that there may be some mysterious ways to make money so easy online. There really isn't! Online jobs are no different from offline jobs. It's like you wander through the alleyways and hoping someone stood there somewhere handing out some cash. Get real, and if you want to learn how to make some serious money, start learning online marketing seriously!

And if you've already completed some of these fake prize-draws and given out your personal data, I suggest that you keep an eye on your bank and credit card statements.

You don't know who's bought (or is going to buy) your personal data. How many of them, and what they're going to use your data for. You're likely to start receiving some spam emails and odd text messages or phone calls, all of which you can ignore. But if worse comes to worst, people can use your data for much more malicious purposes - to hack your bank account, for example. You will be protected if something like that happens, but you should check your accounts regularly to make sure there's no unauthorized access by someone else.

What Other Skills Do I Need To Become A Freelance Writer?

What Other Skills Do I Need To Become A Freelance Writer?