VPN services have changed considerably since their introduction. Today it’s not just a mean of encrypting users traffic when they surf the web. VPNs are also a tool for providing access to a wealth of content - from streaming services to torrents for gaming. Furthermore, travelers can't imagine browsing the internet in public places without the technology too, given that the hotel industry bears the brunt of numerous data breaches (what Marriott and Hilton issues alone are worth).

To sum up all of the above, it becomes obvious that a VPN worth your time and attention. Let's make sense of one with more than 15 million users worldwide - KeepSolid VPN Unlimited.

KeepSolid VPN Unlimited offers mobile and desktop apps: for iPhone, iPad, Android, Windows, Linux, Mac, as well as add-ons for Mozilla Firefox, Google Chrome, and Opera. If you're an owner of macOS, Android or Windows device, Standalone versions are available. So if it happens that the store is unavailable in your location, this won't prevent you from installing the app. 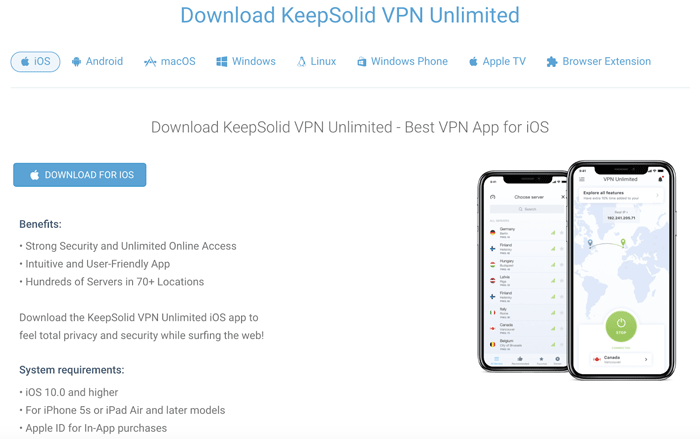 For most people, it's critical just to press the Start button for safety browsing and no to bother themselves with tricky configurations. KeepSolid VPN Unlimited is exactly this case thanks to its user-friendly, intuitive, and accessible interface.

Right after you log in, the aforementioned button appears. At the very bottom, you'll see a list of servers where you can choose the one you need. By default, the app connects to the fastest (optimal) server based on your location. The idea to categorize servers is really nice, as this makes it easy to navigate through them. For more convenient using, a search bar is stipulated. By clicking on the star on the right, it's possible to mark favorite servers to not search them each time. 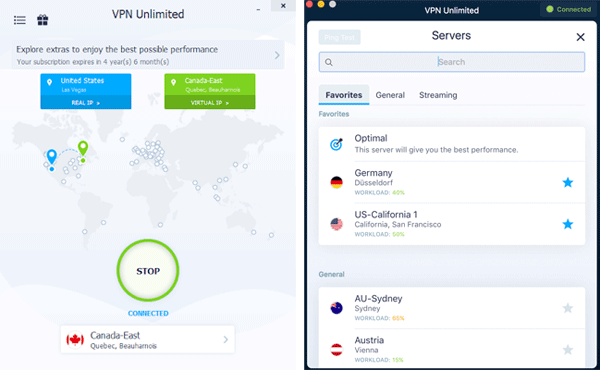 The app’s pricing depends on a number of devices you want to connect simultaneously - five or ten. The prices start at $2.78 and $4.17 per month respectively if opt-in for a 3-year subscription plan. Besides this, there are also other options on their site. If you need coverage for 5 devices, then a 1-month plan will set you back $9.99. When purchasing a 1-year subscription for $59.99, they offer 3 months free. A 3-year will cost you $99.99 and a lifetime subscription - $199.99.

But there's more to come. Firstly, there are some options in the app (or in the user office), where you will find a 7-day and 3-month subscription plans. Turning to the VPN Unlimited site, you will also stumble on extras that include plans for teams and families, personal VPN servers and static IPs.

They do have a 7-day free trial and a 7-day money back guarantee. No credit card is required to start the trial which is definitely an advantage. 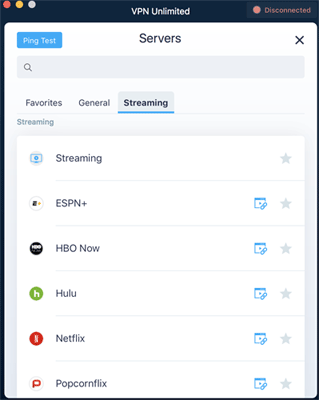 KeepSolid VPN Unlimited gives you access to servers in 70+ locations which are over 50 countries as locations sometimes include different states and regions in the same country. They really cover all the continents.

In order to see the list of all available servers before purchasing a subscription, there is a handy map on the appropriate page. Or you can test servers you are interested in during the free trial period without giving your payment details.

Streaming servers also deserve attention. They can be found on the special list that includes: ESPN+, HBO Now, Hulu, Netflix, Popcornflix, BBC Player, Hotstar, Rai.tv, Sony Crackle. So choose one of them if you want to watch your favorite show from the other country as a connection to regular US servers might not work for you.

As has already been stated, it's quite simple to figure out how the app works. That's why we didn’t actually require any assistance during our tests. However, we reached out the technical support team for the review purpose.

To get in touch with them, KeepSolid VPN Unlimited puts forward such viable options - send a message from the app or their website and via social networks. The first one seemed us the best one as it automatically provides support experts with necessary details regarding the device and OS you use. If there is a problem to open the app, you can try these two other options.

Moreover, 24/7 live chat will save a great amount of time. Those who prefer using social media to solve their issues should know that their average response time on the Facebook page is less than 10 minutes. That representative, who has been in touch with me, was very patient and responded to all the questions. So the experience was very satisfactory.

Alongside those, the FAQ pages may come to the aid. All the manuals on their website are pretty thorough, easy-to-use, and well-organized.

KeepSolid operates under US jurisdiction, which often raises concerns in terms of privacy, as The Five Eyes (FVEY) surveillance alliance includes the US. This means that the US government has tremendous authority to force companies to spy on users and record their data. However, given KeepSolid’s strict no-logs policy, this jurisdiction doesn't matter much because the service limits gathered information.

According to their Privacy Policy, KeepSolid’s VPN services don’t collect any data that could be used to identify you or your online activity.

If you allow marketing materials to be sent when setting up an account, you'll receive some promotional newsletters. You can unsubscribe from the email directly or in the user office on the account tab. To stay up to date on discounts and news we’d recommend following their Facebook page instead.

Your traffic will be protected with a strong AES 256-bit encryption. According to Wikipedia, in order to break a symmetric 256-bit key by brute force, 50 supercomputers that could check a billion AES keys per second (which is impossible to date) would, in theory, require about 3×1051 years to exhaust the 256-bit key space. Consequently, the information you get on or send from your devices with KeepSolid VPN Unlimited enabled consists of ciphered nonsense and is useless for anyone, who catches it halfway through.

Though nearly all the sites use a more secure HTTPS instead of HTTP, and you already know external links from spammy-looking messages and emails shouldn’t be followed, extra protection won’t hurt. With its range of protocols, you will get not only the most solid security level but also the fastest performance. KeepSolid Wise is their custom protocol that masks VPN traffic as a regular HTTPS traffic and uses ports TCP 443 and UDP 33434. It best for use in countries where VPNs are banned. If you are going to China or the United Arab Emirates, remember you can switch to this protocol in the settings.

Another thing worth detailing a bit more is their Trusted Networks feature. It allows users to whitelist the WiFi networks they consider absolutely secure. In other words, you create the list of trusted Wi-Fi connections and when you connect to any of these networks, the VPN connection turns off automatically.

In our tests, KeepSolid VPN Unlimited showed a really solid performance. It’s not the cheapest option, though not the most expensive too. It works well with Netflix, Hulu and BBC iPlayer. If connected to the optimal (nearest and least loaded) server it works like a charm, which isn’t surprising though. The farther a server is, the worse is a lag, but we never experienced any connection drops or significant slowdowns that would stop us from using the app. Overall, it’s a decent VPN service and with its free 7-day trial is an absolutely safe pick.

Namecheap vs GoDaddy, Which Domain Service?