My Commission Bootcamp Review – A Life of Luxury

Commission Bootcamp is the latest program I’ve been invited to join by several email marketers. If you’ve been sent a similar email, telling you that you’ll make at least $500 per day, starting in the next 24 hours, yes, that’s the one. Mind you, there are so many similar “easy” systems claiming to make an unrealistic amount of income in a short period. At least you’re checking my Commission Bootcamp review to find out whether this is a scam or legit, this is a good start for you. What the seller says in the invitation video is inconsistent and his “background” sob story is pretty hideous. Today we’ll go through this sales page and find out what’s wrong with the “systems” like this one.

What Is Commission Bootcamp?

The seller of Commission Bootcamp claims that he’s already set up your account and done all the hard work. All you need is to spend 20-30 minutes each day copying & pasting. You’ll start earning within the next 24 hours, making at least $500 per day, up to $3,000 per day.

He says that the system is extremely private and confidential - only 100 spots are available and it won’t be out to the general public. Yet it has “created more success stories than any other systems out there.”

Does that make sense? Not really to me. Firstly, “copy & pasting”. It’s a job of bot scripts and artificial intelligence. Why would he - or anyone - employ human beings to do such a repetitive, unproductive job?

And secondly, I have seen some great “make money online” training programs with literally thousands of “real success stories”. If Commission Bootcamp was so secretive with such a small number of members, how could it create more success stories, and more importantly, what kind of “success stories” is the seller referring to?

I will now list up some of the warning signals, and you’ll know how the seller tries to wind you up psychologically just to get you to buy this product. 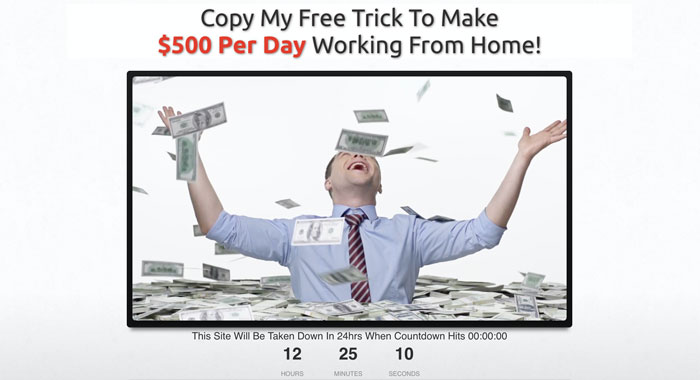 The seller of the Commission Bootcamp says, "copying & pasting is about as difficult as it gets." But like I just said, there's no online job that only requires that kind of work that even a child can do. Maybe 20+ years ago, hell not now. Just like some easy jobs have now disappeared, like a ticket counter at the station, or a typist. Thousands of developers have come up with scripts that can post multiple comments across social networks.

He says the "setup fee" is costing him $500 per person, and he's looking for 100 people, i.e. the total of $50,000. With that money, he could easily get a better, more sustainable system set up rather than randomly reaching out to people.

Not Making Sense 2: The Sob Story

His background story is so cheap and hilarious...well, we know it's fake, don't we? His wife and kids left him just because he wasn't making enough money. The wife had actually been having an affair with a rich guy call Jim. To top it all, the eldest son said to him, "Dad, it's gonna be okay. Jim buys me a lot of gifts."

The scenario is based on sexism, the wife's adultery, the lack of parenting skills...if anything, the problem is not about the money but it's about married life. The main character (the seller of Commission Bootcamp!) didn't do anything to fix the issues but simply cried and let his family walk out... So badly scripted.

He wants you (a random person on the internet) to make money because his friend's dying wish was to get other people to make money, rather than making money himself and donating it to charities. The story's pretty far-fetched.

The seller calls himself "Chris Brant from sunny Miami, Florida." He never appears on the video and no photo of him is displayed on the site. The man who's narrating is not Chris himself but obviously a voice actor. The name Chris Brant is most definitely fake. He says because the system is extremely confidential, he's going incognito. Well, it makes sense logically so far. However, he seems so desperate to get you to buy this product.

He goes, "Once the spots are filled or the timer hits zero, I’ll have to take the site down and you’ll never see this again." He's effectively saying he's going to disappear on you shortly. Imagine a stranger you meet on the street tells you that he'll make you rich, but he'll disappear tonight for good...how much would you trust him?

It's a ClickBetter Product 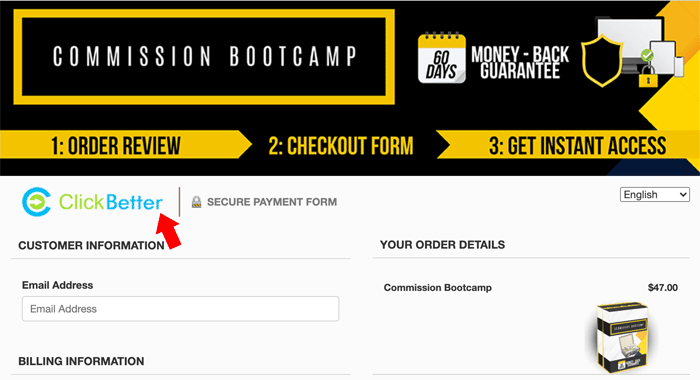 Okay, in all honesty, I wouldn't recommend anyone to purchase Commission Bootcamp because it's sold via ClickBetter. ClickBetter is an affiliate network, notorious for selling scam products, falsely offering a 30-60 day money-back guarantee but refusing to make a refund to its customers at times. I have written about my own experiences with ClickBetter a few times in the past. I would spend any money on make-money-online programs in search of something new, but I wouldn't spend a penny knowing it's going down the drain which I wouldn't be able to retrieve.

Not Making Sense 4: What Is a "Success"?

Now, this is the whole point of making money online. Talking about fake testimonials... You may have noticed when you were watching the sales video, all these people were only talking about the amount of money they made and how great they felt to be financially "free". In fact, all the seller of Commission Bootcamp talks about is;

The entire video is about how easily you can get the money to appear from nowhere, and that's what the seller calls a "success". All you do is spend 20-30 minutes repetitively clicking online - practically doing nothing. The money will become no object, so you live in a mansion and spend the rest of your life on vacation...

...Is this called a successful life? No, it's just a fictional fantasy. What do you think?

You may have heard about advance-fee scams - those emails have been going around for decades, where they say you're entitled to receive a large sum of money for free, but you need to pay them a lesser amount first. For example someone has millions of dollars in his bank account but for a political or legal reason, he can't withdraw it. He wants to send all the money to your bank account. But he needs you to send some few hundred dollars to "unlock the system" first - none of the story makes sense, and of course, as soon as you pay, they'll disappear.

Think about it, Commission Bootcamp is effectively an advance-free scam. He tells you that a life of luxury is immediately available to you, but you need to pay first. He tells you a silly story there again - it will cost $500 to set up your account. But he'll bear $453 towards it, while you pay the rest, which is $47. But earlier on in the same video, he said "your account has already been set up." The payment is required to see that you're fully committed to this. But with all the vague definition of what he calls a "success" and fake testimonials, you know you shouldn't be paying any money for Commission Bootcamp.

By the way, the "income statements" that appear in the video are also fake. The photo of these two women, named "Jenny" and "Maria" respectively, are randomly taken from other sites, and probably used unauthorized.

If this statement was true, the method would have leaked and gone viral across social media by now. I mean, there's never been such an unrealistic job offline in our lifetime. Like making a few phone calls for 30 minutes a day to make $500 per day. Why should there be something like that when it comes to online? Outlandishly impossible.

Is Commission Bootcamp a Scam?

With all the false advertising techniques on the sales page, the payment form being managed by ClickBetter, and the false idea of "success"... You know the answer by now. Commission Bootcamp promotes a "get-rich-quick" scam, targeting daydreamers who are looking for free money. If you don't want to be one of them, you know you should stay away from it.

I'll give you a piece of advice that's ridiculously simple, stupidly common sense, but a lot of people tend to get swayed when they watch a sales video like the Commission Bootcamp's. If you have some spare cash to spend on "make money online" product, never go for something that says "easy". Because without learning the techniques and putting in as much effort, you really won't make any decent money.

Okay, they might say "setting up is easy", "it's easy to start", "the next part is easy to remember", etc. They might say "no previous experience or technical skills are required". But if they tell you that all you have to do is click a few links, copy and paste, and you'll only spend 30 minutes a day - which is exactly what Commission Bootcamp tells you - then they're lying to you. The world economy has never been so uncertain, and millions of people thrive to learn online business techniques to survive this. Anyone can start it, so can you. It is easy to start - just don't underestimate the amount of effort that you'll have to put in before you start receiving a passive income successfully. 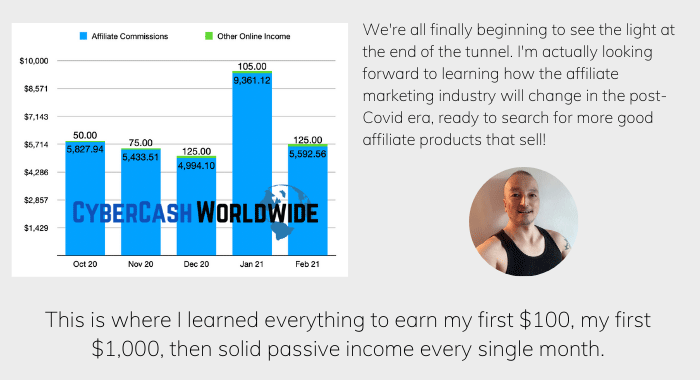