If you've been trying to "make money" with Reward Dollars, stop it right now. It's a scam. You're not getting a penny out of it. You'll not only wasting your time but risk exposing your personal data to spam agencies and possibly, hackers down the line. Everything about this site is fake, but more importantly, my Reward Dollars scam review will explain how you're getting the whole online job concept wrong.

The same scam has been going around for ages, primarily targeting teenage kids. Because adults wouldn't get fooled by such silly cheap tricks. But now look what COVID-19 has done... More adults are looking for online jobs for the first time and losing their sanity. Stop and think about it, people. Do you really think you can ever make money this easy? If it sounds too good to be true, it almost always is, as far as online scams are concerned. Read on!

What Is The Reward Dollars?

RewardDollars claims to pay you for "using the power of social media". It claims to let you "earn" a lot of money each time you share your referral link, complete a fake survey and install a mobile app.

Is it real money? Of course not, you'll never be able to cash it out. What happens is simple. When you send a payout request, you'll hear nothing from them. If you send an email, they may reply once or twice to say that there's a delay in the payment process. But soon your access to the account will be blocked, and that's the end of it. 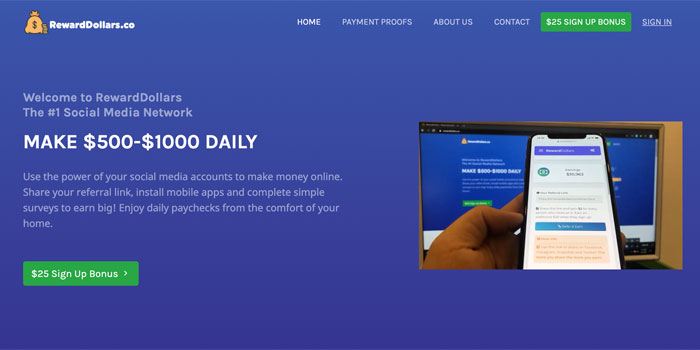 Reward Dollars works in partner with notoriously spammy advertising agents, whose only purpose is to collect your personal data and sell it to third parties for money. They use fake "surveys", offering a high-value prize in return such as a $100-$1,000 gift card, to get you to submit your full personal information - full name, email address, phone number, full postal address, date of birth and so on. All of which will be sold away and, you know the consequences...sooner or later, you'll start receiving spam emails, texts, and cold-calls.

To make the "tasks" even more attractive, RewardDollars falsely offers to pay $50 each time you complete one. So it appears as if you have a chance to win a gift card prize AND get $50 paid by RewardDollars every time.

And of course, Reward Dollars wants to scam as many people, so it falsely offers money each time you get your friends and social followers join. $20 each time your referral signs up, $50 if you promote Reward Dollars on YouTube video and so on. As I explained earlier - you'll never get paid a penny out of it whatever you do.

There have been hundreds of similar - well, exactly the same - data harvesting sites. Reward Dollars is run by the same scammer who runs InboxDollars. Other recent ones include MoreCash, NextCash, EZ Bucks, EarnBucks, Social Bounty...to name a few.

Reward Dollars Is A Brand New Site... And Won't Be Around For Long

Video Testimonials - Little Do They Know Is... 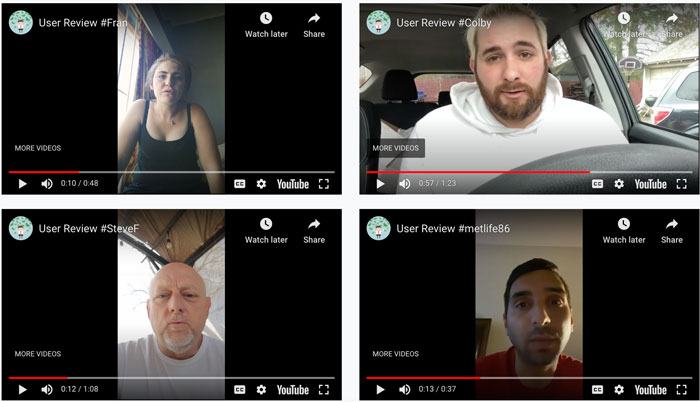 If you listen to what these people say on their YouTube "testimonial", you know none of them has actually got paid. One of them says "I only joined yesterday...but it's great!" They obviously created a clip for the $50 reward in return, which would have been added to their RewardDollars account by now. Little do they know is they'll never be able to cash it.

Previously, such video testimonials were all created by teenagers who had no idea just yet what it is to earn money - online or offline. Now these 4 people are all adults, it's clear that more people are seriously seeking alternative cash resources online for the first time, due to the COVID-19 outbreak. They too are victims, you know, of both the pandemic and Reward Dollars!

Other Testimonials and Payment Proofs

The text testimonials are all fake. The photos are all royalty-free stock photos, you can find on Pexels. 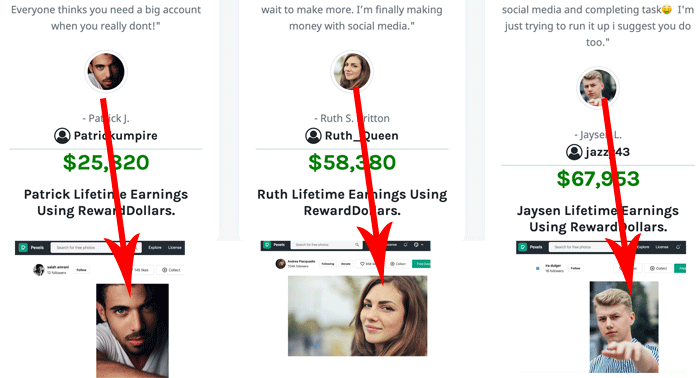 As for the payment "proofs" - you know anyone can make up fake screenshots like these by using graphic software. I'm not a design techie but I could easily create those!

Reward Dollars claims its street address as 20 Rollins Road, Cotesfield, NE 68829. Check that on Google Maps. "20 Rollins Road" never exists in the state of Nebraska. "Cotesfield" is a tiny village in Nebraska but the zip code doesn't match. It's fake. 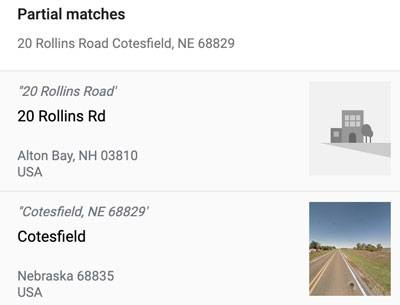 Yes, I have called Reward Dollars a scam, not just once but several times so far... But you know what, they're not technically scammers.

I often get angry messages from the existing users of similar scam sites saying "I lost so much money! We must do something about them, hunt them down and sue them! I'm unemployed and have two kids to feed!"

No, they can't sue them. You can't sue someone for money that's not stolen. You were lied about getting paid, that's all that happened. Free to join. You haven't lost any money in your bank account, you know what I mean?

If you really were to catch the Reward Dollars' owner and managed to take them to the court, the judge would probably order them to pay you what your job's worth in today's market value, not the crazy amount they falsely promised to pay.

You spent days & days sharing your referral links on social media and answering ridiculous questions such as "Do you like shopping? Yes." How much would your job be worth in total? 50 cents? Perhaps even less.

You see where I'm going? That's right. What have you done with RewardDollars to deserve money? Nothing.

Online businesses are no different from offline businesses. If you want to get a job (work for someone else), then you need a résumé to convince them to hire you. Otherwise you work for yourself - run your own business. Online business is easier to start than offline business for obvious reasons - it requires a less initial investment and you can work from home. But it doesn't mean any easier. You need to learn the techniques, put in a lot of effort and be patient before you finally see it start to take off.

Every time you find a new "method" to make money online... There are two silly, very simple questions to ask yourself. I shouldn't even be reminding you of this, because it should be common sense to you if you've ever worked in your life. Yet, many people who are new to online business tend to forget it. The two simple questions are...

There are thousands of so-called "online systems" out there, with a ridiculous claim such as "a revolutionary system that has never been discovered until now that generates money while you sleep". They tell you that you can make X dollars commission within X days. But they barely explain who pays for it and how it works for you to get a share of profits.

Reward Dollars is exactly the same. It claims to pay $25 just for signing up, $20 just for referring someone. Who bears the cost, where does it all come from? And why is the Reward Dollars throwing money at anyone who signs up randomly? None of this makes sense, and the truth is, there's no money. Then you know everything that's being said in the site is fake.

The RewardDollars' Q&A section tells you as if online surveys offer a great way to make money. It may all sound promising if you quickly skim through that section. But if you read it carefully, you'll notice none of the sentences makes sense.

Firstly, as I explained earlier, the RewardDollars' surveys are fake. But what about other legitimate online surveys? Can you make money?

The straight answer is NO!

Google the question and you'll find a hundred+ bloggers who recommend surveys-for-cash as a way to make money. The problem is, they all know that survey sites never let you earn more than pocket money. Because they're not designed to pay you more than a small tip, as a way of "thank you". Surveys are prepared by research companies, right? They want the answers from a variety of groups of people to get the most accurate results. Not from the same serial participants who are only after the money, you see what I mean?

Affiliate marketing is a legitimate business model that allows you to promote someone else's products on their behalf, and you receive a percentage of commission every time someone buys something on their behalf. You can promote almost anything that you can think of on your website - Amazon Associates is one of the most popular affiliate programs in the world, ClickBank is another one.

If you're interested to start your own affiliate marketing business by building your own blog site, join me for free from the link below. If you want to make money - put your effort into it. Don't ever blindly believe in "easy money" like Reward Dollars! Everything has a reason behind it, and you need to understand it.

How To Be Successful In Online Business:
Action Today