Can You Make Money With Online Surveys? [1/20th of the Minimum Wage]

If you search for a list of ways to earn extra income from home, survey-for-cash always appears as one of the options. There are quite a few online survey sites available, no cost to join and easy to start. But can you really make money with online surveys? If so how much can you earn, and which one offers the best deal? 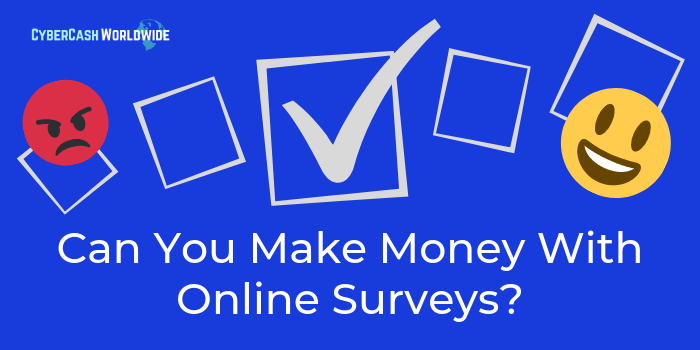 You see, online surveys are run by research companies. They need information from a diverse group of people, different backgrounds, ages, sexes, races, locations...in order to get the results as accurately and unbiased as possible. They need as many people, they don't want the same people to participate all the time.

They often advertise themselves to say "make money by answering our surveys!" But they don't want the monetary rewards to influence the survey results.

You see where I'm going? They offer some money, enough to motivate people to participate, but only a small amount to stop the participants from getting addicted to it. So called "surveys-for-cash" are not designed for the same people to spend hours and hours every day.

For that reason, no, you can't expect to make much money with online surveys. You can get up to $5 within an hour if you're lucky, but not every hour continuously.

If you've already tried online surveys, you know this well. You spend the first 15 minutes of a survey supplying all your details - where you live, your employment status, educational background, single/married, children/no children... Then all of a sudden you're shut out. "Sorry, this survey is not suitable for you on this occasion."

It's such an irritating, soul-crushing experience but it happens all the time. And this is the reason you can't make money. You first look at the list of surveys - 5-minute survey for $1.50, 10-minute survey for $3... You do the math and think you can easily earn over $10 if you spend the next hour answering 5-6 surveys. Not. It's the qualification-test each time before that takes you forever. You'll be lucky if you can get through more than a couple of them.

Again, that's because the research company is looking for answers from a wide range of the diverse group. It's most likely the case that other people who share the same living status with you have already answered the survey.

If you still want to make a little cash by answering surveys, there are many rewards programs available, renowned ones of which include;

There are other rewards programs such as Earnably and Grabpoints, and there are also surveys-for-cash only sites such as Survey Junkie, MyPoints, Vindale Research, to name a few.

I personally think rewards programs are better than surveys-only sites purely because I'd easily get bored. Then I could try something else - play a couple of games to earn a few more credits before logging off. But that's just my personal opinion.

The pay rates they offer are more or less the same. Frankly, they're all the same! Because they're not the ones who run surveys, research companies run them. You see what I mean if you think about how the surveys are prepared in the first place?

So if you use both Swagbucks and Clixsense, for example, you might see exactly the same survey in both programs. One might pay slightly more than others.

Your personal data, as in your full name, email address, street address or phone number. If they ask you any of these details before the survey starts, then it's most definitely a fake. If you enter your details, they'll be sold to third-party advertising companies, and you'll be bombarded with spam emails, texts, phone calls and junk mail in the post.

Think about it, if they genuinely cast a survey for a research purpose, they don't need any of your personal details. In fact they want - they need - the responses anonymously.

If they were to offer a prize competition in exchange for answering the questions, then they would be asking for your consent (to give out your personal data) after the survey, not before. And they would only require your email address in order to enter the competition. Otherwise it would be a data protection breach.

So if you log on to a survey and are immediately asked for your name, address, etc., then stop. Close the browser, to protect your data.

...Then again, they'll be asking you for your personal detail - where you want your money/competition prize to be sent to. All they want is your detail so that they can sell it to third parties. You won't receive whatever's being offered.

You see, as I explained earlier, genuine research companies are looking for genuine answers. They don't want anyone who's primary intention is to make money to take part in their research. For the best interest of the clients (whoever request them to run surveys), and for their own integrity.

You can certainly make a little bit of pocket money with them. But I hope you agree that answering surveys one after another, and another, is not an ideal way. There are better, creative ways to earn an income that's full-time equivalent, you know. But if you'd like to try surveys-for-cash for an experience, the main thing is to enjoy it. Good luck!

If you're interested in making money by blogging, join me free from below.

Join me to get started NOW!
Previous
Next