Survey Junkies, not to be confused with Survey Junkie. It's not a reward program and it's nothing to do with opinion sharing. SurveyJunkies.co has been created to misdirect users who genuinely wish to take surveys for rewards to this counterfeit site. The intent is to maliciously collect users' data and sell it to spammers. Pretty much everything that's being said in this site is fake. My Survey Junkies review will show you how you can spot "scam factors" so that you won't get fooled by this one or any other similar sites in the future!

What Is Survey Junkies?

Survey Junkie (surveyjunkie.com) is a legitimate surveys-for-cash site. But this review is NOT referring to that site. I'm reviewing a different site named Survey Junkies (surveyjunkies.co), which is a data harvesting scam.

With the slogan "We are the #1 influencer network" and by falsely claiming to pay a lot of money for doing barely any "tasks", it attempts to draw the attention of mainly teenage users. It lets users "earn" $15-50 for completing a ridiculously easy task each time, but it's all only happening within the user dashboard. When they request to cash it out, nothing will happen. Their email messages will be ignored, eventually their access will be blocked, and that will be the end of it.

SurveyJunkies offers bogus prize competitions, where users are required to fill out their full personal detail (full name, email address, cellphone number, street address and date of birth). Various illegitimate advertising agents are behind it, start sending spam messages to the users and sell the detail to other third party spammers. 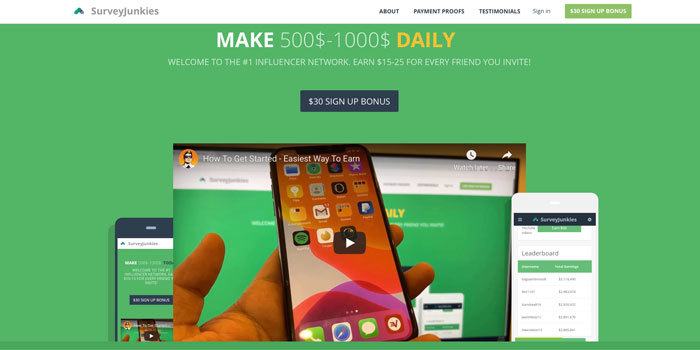 How Does It Steal Your Data?

The key area is "Task Wall". Usually with a legit reward program, a task wall is where users take surveys to earn points. But SurveyJunkies' task wall is full of bogus prize competitions - none of them is a legitimate survey for researching purposes. So this is what happens;

As you can see, the SurveyJunkies' Task Wall will do nothing but harm, risk exposing your personal data to spammers and potential hackers for any malicious intent.

The "Tasks" Are Fake Because...

You might get carried away as you see the high payout rates and attractive prizes one after another. But if you stop for a minute and think about what a "tasks" should be, you can easily work that out. You'll know what Survey Junkies is asking you to do is not a "task", see what I mean?

Filling out your name, email and phone number and answering silly questions such as "how many times do you shop in a week?" None of that is a job worth getting paid for. Either online or offline - that's not how businesses work. No legitimate company will pay any money so randomly for something that anybody can do. There is no privilege, accomplishment or whatsoever. You only get paid for your time and effort you put in - that's the rule, wherever you are in this world. The "tasks" you see in Survey Junkies have zero value and therefore they're fake.

The Prize Competitions Are Fake Because...

You'll also know why these prize competitions don't make sense if you think about it logically. When a legitimate company offers a prize draw, they do it to show their appreciation for their valued customers, and also to attract new customers. Otherwise they'll be throwing their valuable prize away for nothing, which won't be good for their business. If a prize competition is real - for example, if a company if offering a "$100 McDonald's gift voucher", then they will;

The last one is most important because data protection regulations prohibit companies from collecting personal data more than they should. In the case of a prize competition, they don't need each and every participant's full name, address, etc. They only need to ask for an email address, right? Only after the draw, they can contact the winner by email and ask for other details if they need to.

SurveyJunkies claims to have started in March 2015 in Amsterdam, and it also says it's owned "Tap2Earn" from the same year. At least we know that these two sites are owned by the same scammer because Tap2Earn (tap2earn.co) is another site whose only purpose is to steal the users' personal data, using exactly the same scamming technique.

Unfortunately website registration record proves that neither of these sites started in 2015. Tap2Earn site was only created in September 2019 and SuveryJunkies was created the following month.

Some new teenage web users are desperate to be the next social influencer but have not worked out how they can become one as yet. SurveyJunkies' aim is to take advantage of that fact, and so it primarily targets them by overusing the magic phrase "influencer network".

Of course, you're not influencing anyone by sharing a referral link here & there across social networks. 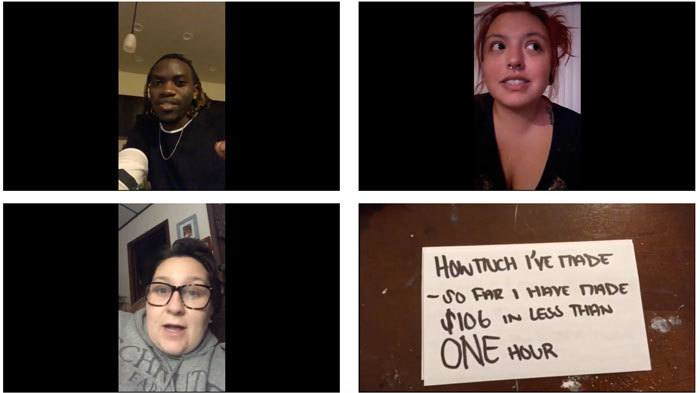 A few people have left testimonials on YouTube, only because one of the "tasks" is to promote SurveyJunkies and get $50 paid. Again, $50 will be added to your SurveyJunkies account once you've uploaded a video with your referral link on YouTube, which you'll never be able to cash out.

These people say "I've made X dollars in X hours!" in the video, but little do they know is that they're actually never getting paid. None of them has actually received a cent from SurveyJunkies at the time of making the video, and none of them will.

Also from a "making money" point of view, they're too inexperienced to convince (=influence) others because they are unable to explain where the money actually comes from, unfortunately.

So Where Does The Money Come From?

That's the thing. Money is not coming from anywhere - there is no money. SurveyJunkies mentions "advertising" but it fails to explain how it creates revenue, where & how it advertises or who the target audiences are.

Even if SurveyJunkies had a lot of money to share, why would it share it with some random internet users? No company in the world would be so stupid enough to throw money away like that. If a legitimate company were to share the profit, it would either;

SurveyJunkies works as an affiliate to these fake "prize competition" agents. Each time you give out your personal detail and complete a "task", SurveyJunkies make a small amount of commission, approx. $1-2. But if promises to pay you $60 for completing a task. How can it pay $60 when it only makes up to $2? It simply can't. SurveyJunkies will not pay you any money because it doesn't have any money to pay!

There are people who make $1,000 or more daily, by using a method such as Commission Hero. They're not special; if you want to be one of them, you can. But there are 3 things you need to do.

Like I've said over & over again, there is no way you can make such easy money by sharing a link or answering ridiculous survey questions. You have to learn the necessary online marketing technique.

I just said "spend a lot of money" (No. 2 above), but there is a way to start with little cost and make a living as an affiliate - by blogging as I do. If you can write and are determined to keep writing, you can be a content writer and receive affiliate commissions by advertising products that you recommend. You don't have to be a perfect writer because, look at me, I'm not! If you're interested in seriously learning content writing, join me free from the link below.