If you've been looking for a SwagPay review and arrived at this site, you did the right thing. Because it's another scam site that makes false promises you to pay you cash for doing ridiculously easy tasks. It will never pay, ignore users' messages and will eventually disappear. There have been a countless number of sites that use almost exactly the same format.

What's so bad about SwagPay is the name. These scam sites often appear in pair. There were ViralPay and ViralBucks. There were CloutPay and CloutBucks. Now here's a new site SwagPay, but Swagbucks is a legitimate, the most popular reward program site. So if you're looking to make money by doing small tasks and answering surveys, or looking to shop and earn points, Swagbucks is the one to try. SwagPay is a fraudulent imitation site.

SwagPay and all other scam sites offer users easy money; $25 just for signing up, $10 for getting each of your social friends/followers to sign up, and $10-30 for completing an easy task such as answering a survey.

Upon signing up, you'll be prompted to enter your payment preference (PayPal, Bitcoin, CashApp or mailed check) "so that they can pay you".

The catch is extremely simple. They won't pay. That's it. They'll never pay you. You can send them a message and you'll never receive a reply. You complain it to them twice and they'll block your access. When enough people are up in arms on social media, they simply shut the site down and disappear.

They are doing this to collect your personal data and sell it to third-party advertising agents. If you sign up using your real name and email address, they can be sent to multiple traffic sellers. If you try answering a survey or enter a prize competition, the first thing they ask you is your full detail - full name, email address, birthday, phone number and street address, all of which will be sold.

The surveys and prize draws are all fake. They offer very attractive winning prizes - new smartphones, game consoles, shopping vouchers and gift cards - so that users (=you) will give out their true personal data. At the end of each survey or competition, you'll notice a message that says, "Thank you for your participation. The winner will be notified by email." Of course you'll never win, because there is no prize. It's all made up!

How To Spot Fake Surveys and Prize Draws

If a survey/prize competition is real or fake - the easiest, most basic indication is this. If it asks your full personal data before you even start answering the question #1 - then it's fake!

If a legitimate company is offering a prize competition, all they need is to ask your email address at the END of the survey. They don't even need your name.

I'm sure you've seen this - just before the submission of your email address, you'll be asked to check the box to agree the terms & conditions. Also only optionally an extra box to check if it's okay to forward your email address to third-party marketing companies in the same industry. Otherwise they promise that your data is protected.

A real prize competition only requires the prize winner's address, not every participant's.

Don't believe a word of it!

In the website, SwagPay "explains" why they can pay you such large amounts of money. You know what, none of it is true. There are a couple of typical expressions that often used by scammers, which may sound authentic but they actually don't make sense or whatsoever. Such as;

"Our service has grown (over the past 10 years) and the value of our referrals have grown."

When one thing grows, everything else doesn't necessarily grow. Instagram has grown dramatically over the years and it's one of the biggest influencers' network. Does Instagram pay you any money for referring others? Not even a cent. No one - no business - ever pays cash to people for referring others. They give you a cash-back or discount voucher as a reward, so that they make sure that YOU SPEND money on them. That's a business rule.

If they "value" (appreciate) the fact that more users are referring their business, they should be spending money on something that meaningfully grow their business more. Not by paying cash to any prople randomly. That would be stupidly suicidal for a company. No one would do that.

"We pay you with money we receive from our sponsors."

This is another expression to trick general users. People might simply think, this company has a lot of sponsors who can pay for them, so they can share some of the money with us too.

There is no such a sponsorship exists. If you were wealthy enough to sponsor a company, who would you "sponsor" (=pay their money to support their activities)?

For example, if you liked games, you would want to sponsor Nintendo because you'd want it to spend your money on the next development projects, so that the company would grow, so that you'd get to play more awesome games.

Another example would be charity groups. If you liked animals, you'd sponsor a specific animal welfare charity group by paying a sponsorship fee. But you'd still want to make sure that the money you spend would be used wholly ethically.

NO ONE would sponsor SwagPay, who claims to give out cash to random users. Some of the users may be criminals - thieves, murderers, or serial pedophiles, and they can make $25 just for signing up, and make $10 each time they refer to another criminal?

If all of this was true, nobody would have to work. Do you see what's being claimed by SwagPay is impossible in the world we live in? 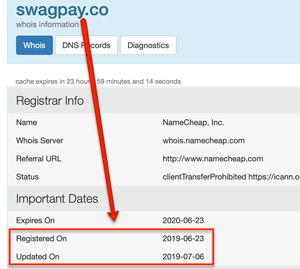 Well, in another page of the same site, it says "SwagPay has been in the business for less than 5 years, but already is #1 influencer network."

None of the statements is true again. They just created this site earlier this month.

SwagPay does not have a single sponsor. It does not even run a business. So it doesn't have money to pay you. It's just a scam.

The "Payment Proof" page displays a few payment notifications to the users, but they're obviously fake - you can make these things up by using a graphic editor easily, you see. 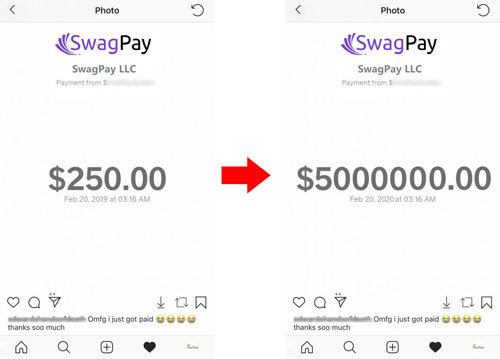 SwagPay Review - You Have Better Things To Do

The conclusion to my SwagPay review - don't get yourself involved with programs like that. If you stop and think twice, you can easily understand that all of this is too good to be true. While you keep dreaming of "easy money", you'll continue to be fooled by similar scams and end up selling your personal data.

Don't waste your time answering fake prize draws - your inbox will be flooded with spam emails, you'll start junk mails through post and worse still, you risk your personal data being used for malicious purposes.