StackPay Scam Review – No Such Job, No Influencer!

If you've been invited to join StackPay.org to "make up to $500 per day", I suggest that you ignore it completely. It's just an old-school scam trick that's been around for years. You'll never make a single dime. Literally every part of the site is made up and, you'll risk exposing your personal data if you sign up with this scam. My StackPay review will explain what's wrong with this site, and what you should be careful of when you see similar sites in the future.

Just to be clear - not to be confused with StackPay.com which is an online payment clearance service, nothing to do with this review.

StackPay.org is a data harvesting scam. It falsely offers to pay you $50 just for signing up and $35 for completing a "task" each time. None of the tasks is really a task; they're all fake surveys and fake prize competitions. They require you to submit your full personal detail - full name, email address, street address, phone number, date of birth, etc, which will be sold to third-party spam advertisers.

Each time you complete one of those fake tasks, the money will indeed be credited to your StackPay account, and it's pretty easy to "make" a few hundred dollars within a day. Unfortunately, that's not real money for you! When you make a cash transfer request, the admin will reject your request by saying that you're not eligible because they found your activities unauthentic, and it will cancel your StackPay account. Whatever you do, it will never pay a penny, it will never give you a chance to discuss, it will block your access, and that's the end of it.

Meanwhile, your personal data will be passed from spammers to other spammers, and you'll start receiving spam emails and unsolicited texts and cold-calls. 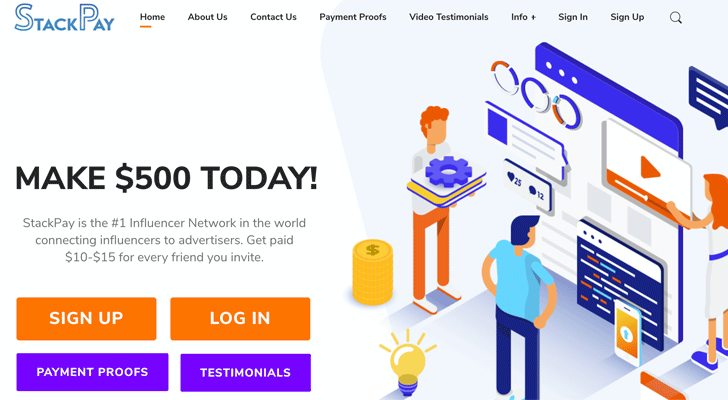 How Do We Know That StackPay.org Is A Scam?

Because there have been quite a lot of identical sites to StackPay in the past, and they've all been scamming new users in exactly the same way. SurveyToPaid, MoneyGuru, GoEarn.co, NextCash, Tap2Earn, EZBucks...to name a few. They all falsely claim to pay $35-50 just for signing up, $20-50 for completing a task each time, and $10-$15 for inviting a friend or social follower each time. They never pay, they all cancel the user's account as soon as they request to withdraw their "earnings".

The scammer is affiliated to the fake advertising agencies and makes a small commission ($1.50 - $2, more or less) each time a user submits their personal data. So their aim is to trick as many people in and get them to submit their data through the fake tasks.

Not surprisingly, these sites don't last long because the users start to complain about them on social media. So the scammer would simply create a copy of the previous site, rename it, and look for more new victims.

The "tasks" in the task wall are all fake, offering a high-value prize such as $100-$1,000 gift cards, game consoles, and smartphones. These "tasks" are fake surveys, run by illegitimate advertising agencies. So you click any of them in the list to start, a new tab will open and you'll be directed to the agency's site.

One of these spam agencies is "National Consumer Center" - the name of which may sound like some kind of a government body, but it's notorious for deceptively collecting user's sensitive data by falsely offering these gifts. The site doesn't even say "you might win" but instead, it says "your gift card - status: available!" as if you've already been promised.

So Why Do Some Users Say They've Got Paid?

"I got paid $380!" No, they haven't. They're just saying it on social media, trying to encourage others to join in via their referral link to earn more money. Little do they know is that they're only earning it within their StackPay account and they'll never be able to cash it.

As I said earlier, StackPay's aim is to scam as many new users, so it provides a unique referral link in your members' dashboard and falsely offers to pay $2 every time you share the link, $20 every time someone accesses to StackPay and signs up.

StackPay.org calls itself "#1 influencers network in the world" as if anyone can become an "influencer" the moment they share a link on social media... While billions of social network users share links - meaningful links - with their friends and followers, just for being social network users. StackPay provides no value, claims to pay a lot of money without explaining where the resources are (because there is no resource!), tries to encourage users to simply share a link and says that's an influencer's job...you see how ridiculous the whole idea of it is!

In "About Us" page (https://stackpay.org/about-us) it says StackPay.org started in March 2015, which is simply not true, because the website stackpay.org was only first registered in 2019 (screenshot above left.)

The address information is also fake, because the About Us page says the office is in Amstelveen, the Netherlands, while the terms page (https://stackpay.org/terms) says it's in Melbourne, Australia. (screenshot above right.) It calls itself "StackPay, PTY" but such a company name cannot be found in the Australian company registration database. 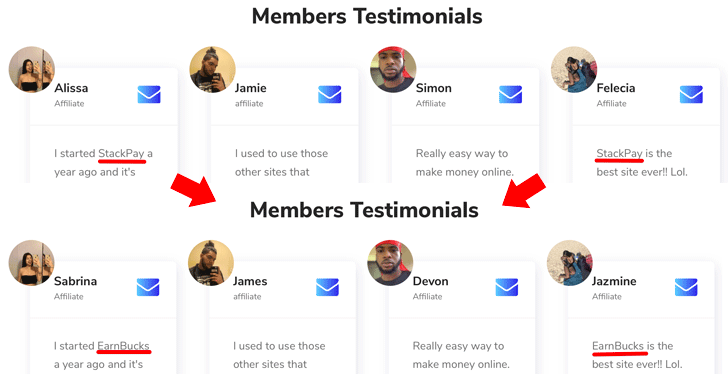 The four people that appear on the homepage to say they make money with StackPay are also fake; these photos have been used and abused by many other scam sites. One of them is EarnBucks, a site that's identical to StackPay as you can see... The site displays exactly the same testimonials with different fake names. The name "EarnBucks" has simply been replaced with "StackPay".

The payment proof screenshots are also all fake - frankly, anyone can create screenshots like these by using a free graphic design tool online.

More importantly, on the Payment Proofs page, StackPay claims to have "paid over $158 million to over 730k members". But if it was such a big company capable of handling such large sums of money, it should at least explain how the company (or team) is structured, who the key managers are. But there's no such explanation (because there's no company!)

Okay, I've been calling StackPay.org a "scam"... But what I mean is simply "the site is deceiving users", but whoever owns the site is not technically a scammer. I'll explain it to you now.

If you've been using StackPay for a while, believed you had made some money with it and now you know you're not getting any of it... You may be a little upset. But can you hunt the scammer down and force them to pay you? The answer is no, for two reasons.

One is because you haven't lost any of your money to it. It's free to join. If StackPay charged you for a service or something that it promised to deliver and didn't...then StackPay would be legally a scam. But that's not the case here.

The other one is, StackPay doesn't owe you any money - you haven't done any jobs, you see? Answering a few silly fake survey questions and sharing a link here & there is no job's worth. It's barely a job. Children can do it, and nobody pays such a lot of amount to some random users for something that children can perform. If they did, that would be so unethical!

In other words, if you were to sue the StackPay.org owner, the judge would only order them to pay you for the value you provided, i.e. what kind of job you had done. Answering surveys and sharing links... That would be equivalent to a few cents, not even dollars!

If You Want To Make Money "Seriously"

There's no "easy" way to make money online, you know. If anyone tells you that you can make X dollars per day using whatever the method they're trying to sell, I suggest that you never believe it until you understand the logical explanation.

Scammers often say things such as "make $500 every day" - what they don't tell you is that you may also have to spend money on advertisements. So there's a very good chance that you'll be making a loss.

So don't get distracted by shiny objects. If you want to make money online seriously, you need to establish your online presence first. You could start your own YouTube channel if you haven't already, but I suggest that you build your own website, which you'll need it sooner or later anyway, to promote products that sell.

If you're interested, join me from the link below and learn the basic skills such as WordPress, keyword research and search engine optimization for free to start with. Good luck!