Yep, you can certainly "make" $500 today easy with SurveyToPaid.com, but you can never have it. It's like a kids game, shoot a few aliens and earn millions of dollars, you know it's not real money. But somehow when it's not millions but it's hundreds of dollars, people tend to believe that they've actually made it. Today SurveyToPaid review will explain how it uses cheap tricks to scam new users, and more importantly, it will explain what you should look for instead of wasting your precious time on silly scam sites like this one.

SurveyToPaid.com is a data harvesting scam. Its only aim is to collect users' personal information through fake "surveys" and sell it to third-party advertisers to make money.

What it falsely offers is far too good to be true - if you are an adult and have been looking for ways to make money online, you'll work out pretty quickly that the site is fake. So it primarily targets teenage users with no work experience.

Firstly it invites you with the slogan "Make $500 Today!" and (falsely) offers you $30 just for signing up. It falsely offers to pay you $50 each time you complete a ridiculously easy task. The aim is to scam as many users, so it encourages you to share your referral link and offers to pay you $2 for every person that clicks your link and an extra $20 when they join SurveyToPaid... Falsely.

Your SurveyToPaid account balance will increase as you do these tasks and, it'll indeed be pretty easy to "earn" a few hundred dollars within a day. The "catch" is extraordinarily simple; as I said in the beginning, this is not real money, so you can't have any of it. Yes, it does promise you to transfer money to your account via PayPal, Cash App, Bitcoin, or mailed check... FALSELY. When you make a withdrawal request, it will simply reject your request and abruptly cancel your SurveyToPaid account. You will no longer be able to access it using the same username and password, and that's the end of it.

Actually, that's not the end - by then, you'll have submitted your full personal detail via Task Wall, so you'll start receiving spam emails, unsolicited texts and cold-calls from companies that you've never heard of. 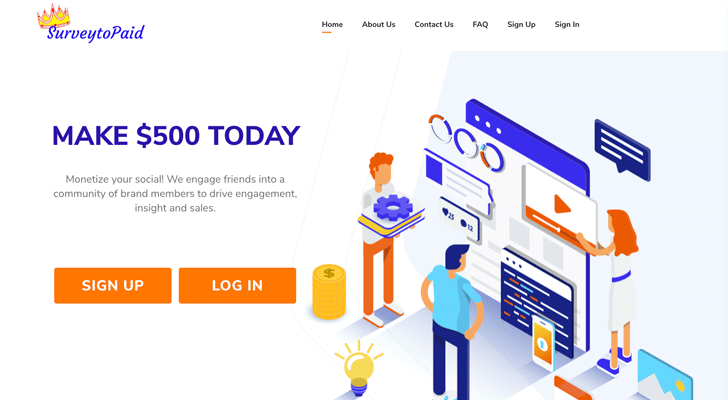 Why Doesn't It Pay?

Well, the simple answer is, it won't pay you because it's not making enough money to pay you. It claims to be the "#1 influencers network" but never explains how it runs its business (because it doesn't run a business!) If the claim was true, the name SurveyToPaid would appear all over the social media. It's the name that nobody has heard of. You can easily work out that the claim is fake just by googling it.

Each time you submit your personal data through one of those fake "surveys" in the Task Wall, SurveyToPaid receives a small commission from the spam agency, estimated around $1.50 - $2.50. That's how SurveyToPaid makes money, and that's how little it makes. But SurveyToPaid claims to pay you $50 each time you complete a task. How can it pay you $50 when it only receives up to $2.50? It can't - it's impossible!

How Do We Know The Surveys Are Fake?

All the items listed in the Task Wall seem to offer a prize. Some pretend to be running a prize competition (e.g. "Win $1,000 PayPal gift card!") while others suggest that they may be randomly giving away for free (e.g. "Get McDonald's Gift Card").

Whatever they say - I can tell you that they're all fake. Why? There are two main reasons;

Because legitimate survey companies don't regularly give prizes! If you think about why they run surveys and opinion polls in the first place, you'll understand the logic. Real surveys are run by research companies, right? In order to get the results as accurate as possible, they require as many people to answer. Diverse people from different backgrounds. Imagine - if they started giving out prizes in exchange for answering surveys, freebie seekers would keep coming back to answer all the questions one after another. Their intention is not to help the research companies. They couldn't care less about the surveys, they just want to answer as many of them hoping to get the prizes.

That would be the last thing research companies want, and that's why legitimate surveys-for-cash don't pay more than a small amount ($0.05 - $1 per survey) just as a gesture of goodwill.

Not just SurveyToPaid but if you see any "survey" that offers a prize in large value, it's most likely to be fake.

Legitimate companies - not just survey companies but any companies - run the business in accordance with the data protection law. The law varies from country to country, but generally, it prohibits companies to collect and retain sensitive information from individuals more than necessary.

Surveys should be taken anonymously to get unbiased results - they may ask your age group, ethnic background, living environment, household income, etc, etc. But they never ask you anything personal such as your name, address, or phone number - because none of them is necessary. If they were to pick a winner out of the participants and give a small prize, they could email the winner after the prize draw. They don't need to collect every participant's full personal detail and if they do without clarifying the intent in advance, they are in breach of data protection regulation.

So you understand now that the surveys from the SurveyToPaid's task wall are all fake because they all ask your full detail right at the beginning.

The site has a fake "income projection calculator" that tells you how much you could make a day with this site. If you try the calculator, you will notice the numbers are not proportionate in any way. It tells you that you can make $5 a day if you have just one social follower, whereas you can only make $28 a day if you have 100 followers.

Well, as I explained earlier, you will not make any real money with this scam site, anyway. But we all know that it's not the number of followers that counts because some social users are more active than others. A social user with 100 followers can get more reactions (likes and comments) than a user with 10k+ followers.

The homepage says the site is run by SurveyToPaid Ltd, 20 W 34th St, New York, NY 10001, which is the rear entrance of Empire State Building, which means the address is obviously fake. A company name with the suffix "Ltd." shouldn't exist in the state of New York, so the name is also fake.

What the "About Us" page (surveytopaid.com/about-us) says don't really match. At the beginning, it says "Did we really become the #1 Network in under 10 years? YES, we’re that good." But the company history underneath says "SurveytoPaid started in March 2015 in Amsterdam". If it had started in 2015, it would have been 5 years, shouldn't be described as "under 10" really. But the domain information proves that the site was only created in April 2020. It means the entire description in the About Us page is fake.

It also claims that the company has been mentioned in Forbes as the #1 influencer network - there's no proof of that, and had it been mentioned by such an authority publisher, it would at least have gone viral across social media, but SurveyToPaid is virtually unknown. The claims to have won awards for "high paying offers" is laughable; You don't win awards simply by offering something of high value to customers or whoever. Without explaining how it deserved awards and what kind of value it contributed, the claim really doesn't make sense at all.

By now, you know SurveyToPaid is a scam site where not only will you never get paid a penny but you'll also risk exposing your personal data to spammers and hackers. So when you see any similar site in the future, you know you'll just have to stay away.

It also seems to me that SuveyToPaid tries to give the wrong idea of what it is to become an influencer to new social network users. Teenagers admire YouTubers and Instagrammers, many of them are perhaps hoping to become one someday. But influencers have established their positions over time by being unique, not by answering silly surveys for the chance of winning a McDonald's gift card and sharing the referral link here & there... That's not what "influencers" do - it's barely influencing anyone!

In fact, millions of social network users share links every day, every hour. For free. Nobody offers to pay cash for simply sharing a link. The whole idea that SurveyToPaid suggests is crazy, you see what I mean?

If you're looking to make decent money online, the only way is to start running your own business. And to do that, you need to start learning the marketing techniques. You know what, anybody can start and anybody can learn it, but only those who put in as much time and effort can eventually see good results.

From time to time, you might see some people brag about making money online "easy" - don't believe any of them, because they're most likely to try inviting you into their scheme, purely to make money for themselves. You don't want to end up spending money for them for nothing, do you After all, there is no easy way.

If you have no experience in running your own business, you don't have to worry - affiliate marketing allows you to start today, build your own website and start promoting other people's products while you learn the techniques. Join me for free from the link below if you're interested - if you're determined and persistently at it, you will start earning passive income.