If you thought it sounded too good to be true and decided to check a SpininCash review, you did the right thing. Because pretty much everything that they tell you is untrue. So many users have already wasted their time on similar scam sites, and you really don't want to waste yours. This SpininCashreview will not only explain what those scammers do but will also help you to learn a few things such as;

If you want to take steps to sustainable success online, check towards the bottom of the page. Here we go.

SpininCash claims to pay cash for doing ridiculously high value of cash, such as $15 just for sharing a link on social media, and also claims to let you win up to $1,000, PS4, or Xbox by spinning the "lucky wheel".

All of this is fake. Firstly to be eligible to spin the wheel, you'll have to answer some surveys and earn some tokens. The surveys are also fake, all falsely offering a high-value gift card.

SpininCash is a data-harvesting scam with illegitimate advertising agents behind it. Using fake rewards as a bait, they encourage you to take surveys, or whatever the tasks. To complete a survey, you'll have to submit your full personal detail (full name, email address, street address, phone number, date of birth, and so on), which will be sold to third party spam agencies. You know the consequences; you'll start receiving unsolicited emails, nuisance texts, and cold calls.

You can easily "earn" several hundred dollars by completing these tasks and sharing a link on social media... Of course, all this is only happening within your dashboard. When you actually request to withdraw cash, the admin will either simply ignore your request or disapprove of it. Your SpiningCash account will soon be canceled, and that'll be the end of it. You'll never, ever receive a single dime from SpininCash. 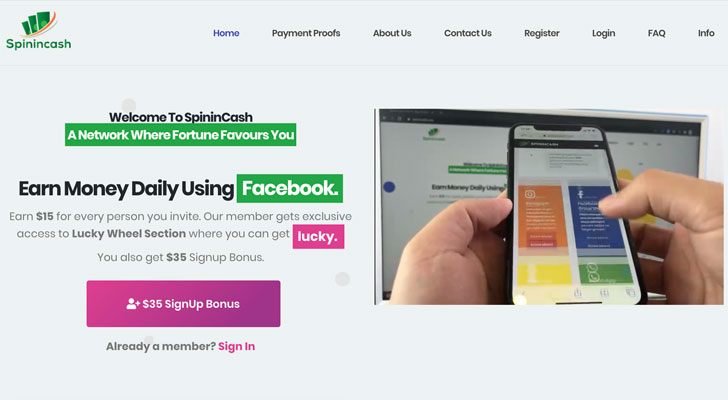 How Do I Know You'll Never Make Any Money?

So that's the scamming tactics, and you'll never get paid or receive any kind of rewards from SpininCash. But how do I know all this, you may ask?

That's because there have been so many identical scam sites out there for a while. SpininCash has copied the format of Earn2Flex, which in turn is a copy of FameCash, CashGem, Reward Dollars, Paid2Share, and many others. If you search these names on Facebook or Twitter, you'll find many complaints from the users.

Why Do People Fall For It?

Each time a user completes a survey or shares a link on social media, they'll see the "account balance" increase in their SpininCash dashboard. They (mostly teenagers) get carried away by it and simply think that they've "made" that money.

When they play action-adventure games, they know the money isn't real (e.g. earn $100k each time they shoot an alien or pick up a treasure). Then what makes them think SpininCash is paying out real money? It's no different from those kiddie games.

Well, SpininCash does say that it pays cash, and tries to make the site as real as it can...showing the terms page, user testimonials, FAQ's... All of them are fabricated. I'll explain in a minute.

Featured on Forbes and Yahoo News?

The sites like SpininCash are all targeting "inexperienced" internet users, i.e. predominantly teenage users, who have yet to learn what it means to make money and how businesses work. They seem to fall for the silly scams because let's face it, a decent adult should easily be able to work this out. Who in the world would ever give random people $35 just for signing up? Companies may give you discounts, but never voluntarily give out cash, for you to go away and spend it elsewhere.

SpininCash also claims that it's been featured on Forbes and Yahoo News. Imagine if it was true, drawing the attention of millions of users. The news would have gone viral overnight and people would have tried to get free money - unemployment and poverty problems in the world would have been sorted.

According to the Terms and Conditions page (https://spinincash.com/terms), the company name is "SpininCash, PTY" which is based in Melbourne, Australia. But such a company name cannot be found in the Australian company registration database. This proves that the company doesn't exist.

Has SpininCash really "caused an uproar on all social media", paid out $9.7 million to over 300k members? Of course not. Well, firstly, SpininCash is a brand new site, only opened in early June 2020 (image below, left). 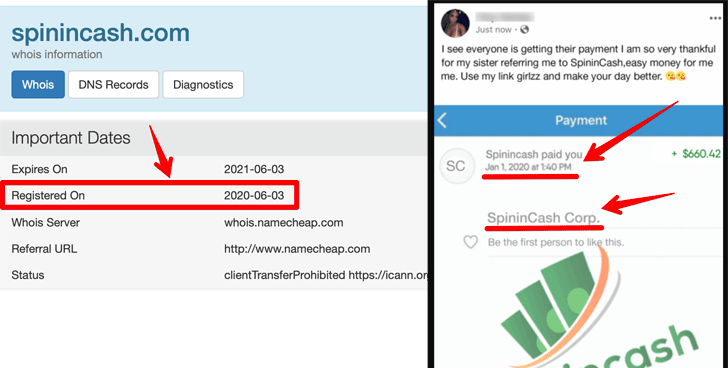 The "payment proofs" are all fabricated; the screenshots of social messages from fictitious users saying "Thanks to SpininCash for the payment! I just received this morning!" and all. Anyone can create fake screenshots like these by using free graphic software. And when you look at some of the fake "screenshots" (an example as shown in the image above, right) you may notice how inconsistent.

Talking about Terms and Conditions, the scammer must have used a standard template and haven't even read it themselves... One clause says, "If you are under the age of (99), you are not allowed to use SpininCash and its features." The "99" should be replaced by a different number like 16. Silly mistake.

A Brand New Site That Doesn't Tell You "Anything"

While the homepage says "our members enjoy our transparency", SpininCash is anything but. Especially the FAQ section doe not make sense. New users may skim through this section, or even ignore it because it contains phrases such as "developing an AI-based algorithm" and "operate at 8 times the efficiency of other social networks" which may sound a little technical to understand.

What it actually says is;

The logic is totally made up out of order. Can you imagine any social networks pay you money just for sharing silly links here & there? Regardless of the number of your followers - zero or one million - it wouldn't be fair on real influencers who have built up years of experience and thrive to deliver invaluable information to others.

Yes, some users share valuable information with others on SNS. And others share wrong information, post abusive or damaging content, and do with whatever malicious intentions that they may have. SpininCash ignores that simple fact completely and claims to pay any users a flat rate for each action. It doesn't make sense or whatsoever.

In case you're still wondering, all the testimonials are also fake. The photos are not of real users, they're just stock photos from royalty-free image sites such as Pexels.

How To Spot Legitimate "Surveys For Cash"

Now, how can you tell a survey-for-cash site is legit or scam? Real, legitimate surveys are run by research companies, right? To find out consumers' living circumstances, opinions, and preferences. They may be requested by companies to improve their products, requested by a government body to improve the services. So we can all live in a more comfortable world...whatever, you see what I mean. For that reason, you can easily spot scam/fake surveys by remembering the following two measurements.

They don't need your full street address to find out your opinion. In most countries, data protection laws are set out and companies are not allowed to collect and retain personal data from the general public for more than necessary. "More than necessary" means, for example, they might let you enter a prize competition at the end of a survey. If they do, they only need the winner's street address to send the prize, they don't need every participant's.

The "surveys" via a scam site like SpininCash ask you to fill out the full detail every before they start asking the questions. They're not surveys, they're only trying to collect your data to sell.

Real surveys only pay you around $0.10 - $0.50 per survey, more or less, as gratitude. Because think about it. What research companies look for is more genuine responders - they need as many people to answer the survey questions to get more accurate results. If they started paying better rates, more people would start to answer surveys just for money, right?

Offers that appear in SpininCash are all high-value items such as $100 gift cards, brand new smartphones... They are, of course, all fake. Nobody will receive such a reward from these sites.

High-Paid "Anybody Can Do" Jobs?

If you are wondering which "surveys-for-cash" schemes pay better rates... I'd say, stop wasting your time. Because you're going to waste your life.

For two reasons; one is like I just said, they never pay good rates. You're not going anywhere while you're looking to make $8 a day instead of $6 a day.

The other reason is, it's an unproductive "anybody can do" kind of job. You're learning very little from it, and it's not sustainable. Any offline (local) jobs that don't require any qualifications pay low salary, right? But you'd still have to apply for a position and attend a job interview. It's up to the boss to decide whether to choose you or not.

So as you can imagine, any "jobs" online that don't require an interview or any selection process pay extremely low rates - cents, not dollars.

We often see some "make money online" products with a slogan such as "Easy job with no previous experience required. All you need is an internet connection!" They either won't let you earn a dime until you've learned all the techniques or are scams.

The Only Way To Earn Decent Money

I hope you understand what I'm trying to say by now. Get real - there is no job that anybody can do and start earning money right away. The only way is to use your knowledge and skills that others don't have, and use them online.

If you don't have any knowledge/skill, you can still build your own website and start your own business as an affiliate. Affiliate marketing is a legitimate business model where you promote other people's products and receive a commission every time someone follows your advice and make a purchase. You still have to learn quite a few techniques, but you can create your own website within a few minutes (which is going to be the start of everything). If you're interested, join me from the link below for free, follow the first 10 lessons for free and see what you think.

Any questions, don't hesitate to leave a comment below. Good luck! 5 Ways to Find and Recruit Talent

5 Ways to Find and Recruit Talent

Make Money by Writing a Blog

Make Money by Writing a Blog

Basic Keyboard Shortcuts That Everyone Should Know

Basic Keyboard Shortcuts That Everyone Should Know