EZ Bucks Scam Review – You Will No Longer Waste Your Time

"Is so-and-so a scam or legit?" It's easy to keep asking others to find out a simple yes/no answer. But sites like EZ Bucks are obviously scams, once you learn what their sites look like, what they do to scam, and what for, you'll no longer waste your time wondering. There are hundreds of almost identical sites out there, you'll know you just have to stay away. My following EZ Bucks review will show you have to identify them, so you can start looking for proper, legitimate ways to make money online elsewhere.

What Is EZ Bucks?

EZBucks.co falsely claims to be an influencers' network. It claims to pay you money for doing nothing jobsworth. Such as $35 just for signing up, $30 every time your friend or social follower signs up, $40 every time you complete a "task".

Don't get carried away, because if something sounds too good to be true, it most definitely is. And EZ Bucks is no exception. Upon joining, you'll be asked how you want to get paid - via PayPal, CashApp, Venmo, Bitcoin, or mailed check - just to pretend that they're ready to pay you at any time. But they won't pay. They'll never pay you. When you actually send your withdrawal request, nothing will happen. Your request will be ignored and your access to the EZ Bucks account will soon be blocked. 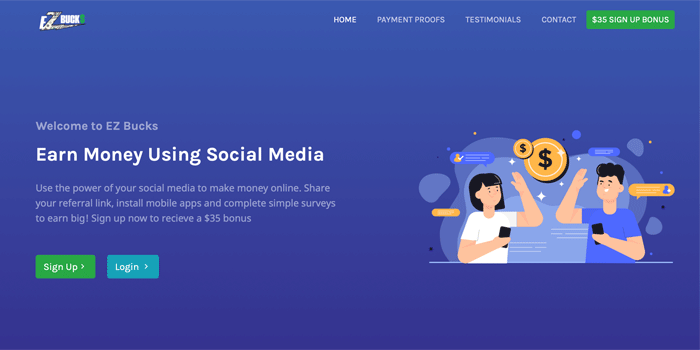 What Are They Scamming For?

EZ Bucks is unlawfully working in partnership with advertising agents to collect your personal data in the name of a "task". If you look at the items under the "Task Wall" menu, you'll see none of them is a task. "Get $1,000 Visa card" "Get Dunkin' Donuts gift card", etc. They're prize competitions, in fact they're FAKE prize competitions. To enter a competition each time, you have to give your full personal detail, i.e. full name, phone number and street address as well as your email address. That's where the pitfall is. Any information you enter will be passed on to illegitimate advertisers, and you will soon start to receive spam emails, unsolicited texts and/or calls.

EZ Bucks claims to pay you $2 if you share a link on your social media and each time someone clicks the link, and pay you a further $30 if that person who clicks the link joins EZ Bucks.

They falsely offer to pay a lot of money to motivate you to share your link more, so that they can trap more people in and scam them. They offer to pay a whopping $40 to participate in the task wall, hoping that you'll be motivated by the $40 AND a chance to win a gift card. And just as I explained earlier, the task wall is where they want to send you the most, where they can steal your personal ID's.

Anyway, I've tested it for the sake of it. I tweeted the referral link and deleted the tweet immediately. My account balance was $35 (for signing up with EZ Bucks) before the tweet. After the tweet, the balance shot up to $55.

This is a brand new Twitter account and it has no follower. And I deleted my tweet with the link literally a few seconds later. Did anybody see my tweet? Extremely unlikely. Most definitely not. I even called it a "scam". And EZ Bucks gave me $20 for it. You see how ridiculous it is? EZ Bucks automatically and randomly adds a lot of credits to your account this way just to motivate you.

In the end, they will delete your account without making a penny to you, and eventually shut the site down.

Nobody Will Pay Cash For Free

Think about any companies that ever give you a reward. Many companies offer discounts just for signing up, or for referring to your friends, family members or social followers.

Restaurants, apparel, Starbucks...Amazon... They never pay you cash. They give you a voucher, a discount, or a cashback to make sure you'll come back to use their service again.

EZ Bucks doesn't sell anything to you. You're not spending any money on EZ Bucks site. You're not working for EZ Bucks either. (Merely sharing a link or answering silly survey questions is not work.) There's no reason why EZ Bucks should pay random user such a large amount for barely doing anything beneficial for them.

The "influencers" who appear on the EZ Bucks' homepage, leaving a testimonial are all fake. The photos are all taken from royalty-free image sites such as Pixabay and Pikrepo. In fact, payment proofs are also all fake - you can make these kinds of images using a graphic app easily. The home page also says that EZ Bucks' address is Silicon Valley, California, that's a big fat lie. Nothing that's being said in the EZ Bucks is true!

Real Influencers Never Do This

EZ Bucks tells you to "use the power of social media" to make money online. Unfortunately this scammer is totally misleading you.

Now if you were to recommend EZ Bucks to your social followers, what would you be able to say to them?

"Because EZ Bucks will pay you!"

That wouldn't be a valid explanation. You'd have to explain why they can pay - where the money comes from. How would EZ Bucks make money, and why would they give away the profit to users so randomly? Instead of using it for a good cause, i.e. giving it to charity?

Well, if you knew the answer to these questions and could explain it to your social followers, that would be the start of becoming an influencer. But unfortunately, EZ Bucks is a scam, and it is making very little money. The scammer has no money to pay anyone. For that reason, there's no way real influencers can join EZ Bucks or do anything to do with it.

Affiliate Marketing to Influence Others

If you want to learn how to influence others using social media - Instagram and Facebook particularly, set up your own website and start making money as an affiliate, Wifi Wage will be a great place to learn it all. The tutor Tom will walk you through easy steps, and once you get your techniques rolling, he'll teach you how to scale it all up. There is a job for everyone!

How I Failed With SFI – Strong Future International Review

How I Failed With SFI – Strong Future International Review

How To Write A Blog Headline That Doesn’t Suck

How To Write A Blog Headline That Doesn’t Suck