Can you really make $500 daily with a site like Pay2Fast.co? There are hundreds of GPT (get-paid-to) sites out there, and none of them requires special techniques. All they need you to do is mostly click, copy and paste. If one particular site allowed you to make so much money, wouldn't it be fair on others who spend all day just to earn a couple of dollars? So if you've been wondering, my Pay2Fast review will show you the truth behind it all. If something sounds too good to be true...

The intention of Pay2Fast.co is to deceptively send as many users to fake prize-giveaway sites for a commission. It mainly targets teenage users, falsely claiming to pay a lot of cash for answering surveys and referring others. The offers include;

Users will see their account balance quickly grow as they complete the 'tasks', and that motivates them to carry on even more.

They are told that they'll become eligible to request to withdraw it when they've earned $140 or more by clearing all the requirements. However, they'll never be able to cash it. Soon after they make a withdrawal request, their Pay2Fast account will be deleted by the owner.

But that's not the worst part. Through the fake 'surveys', users submit their personal information - their full name, email address, phone number, street address, date of birth, etc., all of which will be sold to illegitimate third-party advertising agents (i.e. spammers.) As a result, users will start to receive unsolicited messages and cold calls from companies that they've never heard of. 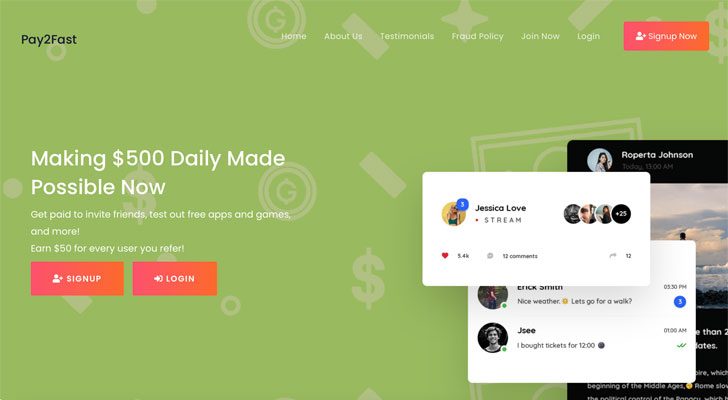 How Do We Know The Site Is Fake?

Well, first of all, the Pay2Fast site is almost identical to SurveyJ, another fake site that received complaints from previous users. We've actually seen hundreds of similar sites in the past few years, such as StackPay, Survey2Paid, and Earn2Flex, to name a few, all of which claimed to let you earn $300-$1,000 a day for sharing links and answering easy surveys.

In the following, I will list some of the information on Pay2Fast that proves to be false.

No Revenue Source Is Explained

Don't you think it's strange that some company you've never heard of before is practically giving away so much cash? You should be suspicious because money never appears out of nowhere. If Pay2Fast was able to give out so much cash, then it should be running a corporate-level of business that raises so much revenue. But none of it is explained.

Real Surveys-For-Cash Don't Pay That Much

Legitimate surveys-for-cash don't usually pay more than $1 per survey. Some only pay 10 cents or even less per survey. Because they're not supposed to pay!

Why do companies conduct surveys? Because they need to collect data from particular groups of people, right? They research, and they need accurate information and unbiased opinions. If they started to reward a lot of money, people would start to take as many random surveys just to earn money. That would be the last thing those research companies want.

That's why the reward for answering surveys is kept at a minimum. Just a few dimes as a way of "thank you".

So What Is The Pay2Fast Survey Wall?

The offers listed in the Pay2Fast are not even surveys. They are all fake gift offers, such as a $1,000 Visa gift card, Amazon gift card, a brand new game console, smartphone...etc. If it says "Win a $500 Amazon gift card" then it implies it's a prize competition, but some of them don't even use the word 'win' but simply say, e.g. "$1,000 Visa card", which could suggest that anyone who applies for it could get it for free. This advertising method is misleading and even illegal in many countries.

If you click one of them, you'll be redirected to a third-party fake sweepstake site. For example, this one is "Reward Giants USA". It doesn't say that you have a chance to win a Visa card, but it says "claim the reward" instead.

It does not explain what the reward is for, despite the fact that you're practically not doing anything apart from answering a few silly questions like, "Do you feel low on cash?" "How many times do you shop per week?"

But instead, it explains "how fast" you can receive the reward. Imagine every American adult is entitled to receiving a $1,000 prepaid Visa card just by visiting this site, then you know something fraudulent must be going on.

These sites are not genuinely offering 'rewards' or gifts, or any kind of freebies because again, if they do, they should be explaining why. I'm stating the obvious here - nobody in the world would give a gift card to random users on the internet, let them go away with it and spend money elsewhere.

If you were a shop owner, you would give a gift only to your existing customers, wouldn't you? Or give your own gift card, so that they would come back and spend on your shop products. You might as well donate your money to charity, otherwise.

These gift-giving sites are "data harvesting" scammers - they lead you to believe that you have a chance to receive a high-valued gift. To receive it, you'd have to give them your name and full address. You'd have to give your other contact details such as your phone number and email address in case something went wrong.

Once you submit your personal information, you'll never hear from the same company. But your information will be sold, so you'll start hearing from other unknown companies about more offers, none of which will be real.

The question is, who your personal information will be sold to. If they're all fake advertising agents, you'll only be suffering from nuisance emails and calls. Why if some of them are hackers? They could potentially access your bank account or borrow a large amount of money from a loan company in your name. There are such good reasons you should avoid sites like Pay2Fast.co at all costs.

The testimonial photos are fake - for example, this one is not "Richard Brubaker", but it's a photo of a Brazilian model called Amadeo Leandro. When I did a reverse image search, I found it was used by multiple fake social media users with different names on LinkedIn and Twitter. I guess the photo's being passed around because this Amadeo guy is not super-famous in English-speaking countries right now.

The other "testimonial" photos turn out to be fake. If you are still having doubts, perhaps you can search them yourself on images.google.com.

In your dashboard, you'll be asked to save your preferred payment method - PayPal, CashApp, Venmo, Bitcoin, or Mailed Check. But there's just one box, and it doesn't tell you what information should be saved.

If PayPal, all it needs is your PayPal email address. If it's Bitcoin, the address generated by your wallet, if mailed check, your full street address.

The problem is that the box part is not encrypted, so the information you save is exposed to the Pay2Fast owner. This can be easily passed on to cybercriminals, so if you've saved your payment method already, I would strongly suggest that you go back in and delete it.

So Is Pay2Fast a Scam?

Not technically, because it's free. The term 'scam' is usually used to describe a business that takes your money fraudulently and does not give back any value in return. If you've been spending some time on Pay2Fast, time is the only thing that you've lost. You haven't lost your money to it.

Pay2Fast only tries to make you believe that you can make money by joining. It's not a scam, it's just a liar. But as I said earlier, giving away your personal information to a company that you don't know is a risk, because your information can go viral among multiple advertising agents and there may be scammers somewhere down the line.

Pay2Fast claims to be "the #1 Influencers Network" - is that true?

Of course not, nobody's heard of it because the website Fay2Fast.co was only created in May 2022. 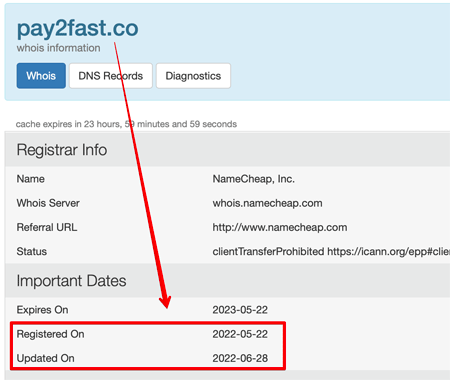 I'm not an 'influencer', I'm not in a position to give you or anyone advice on how to become an influencer. But I know, and you probably know too, that respectable influencers know how to promote themselves using a way that others don't. And it has taken them a lot of time and effort to get to the position they have now.

What Pay2Fast is suggesting is that you merely share links here & there across social media and say "Pay2Fast pays!" You won't be able to make any logical explanation behind it (well, that's because there isn't any.)

As you can see, there is a lot of false information on the Pay2Fast website. In fact, pretty much everything being said is fabricated. There are some reasons not to get involved with a site like this;

So how can you make money 'real' way?

First and foremost, there's no way you can earn a decent income by doing what anyone else can do without learning. Look at the 'tasks' that Pay2Fast is offering, even a small child can do those. You really have to put in the effort to learn;

I'm not saying you have to spend thousands of dollars. You can start free, but to be able to make money, you'll have to spend some money (can be less than $100) on training and some essential tools before you can start making a respectable monthly income.

My top suggestion is to start learning affiliate marketing because it will allow you to earn commissions for promoting someone else's products, so you don't have to be a creator or retailer, you don't even have to 'sell'. If you want to start from somewhere decent but don't know where, then join me from the link below and learn the first 10 lessons for free. Ask as many questions as you wish. Good luck! 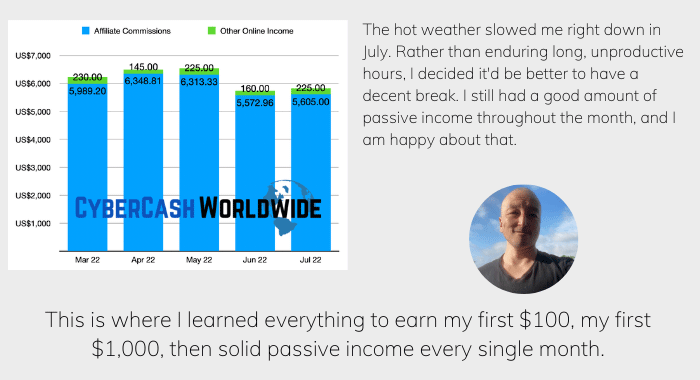