It's actually easy to spot the difference between legitimate reward program sites and bogus scam sites like Smart Dollaz.club. The difference is the level of reward rates. Nobody pays more than a few cents for taking an easy task that anybody can do. If they claim to pay $10, $20, or more, they have malicious intent behind it. Read my following Dollaz.club review, and hopefully you'll learn what to look for when you see a website that offers something too good to be true.

If you're looking to make money online for the first time and introduced to any particular "method", one of the first things that you should find out is who is paying for it - where the source of money is. Revenues don't pop out of nowhere and generate themselves. If you're supposed to earn money, somebody's got to pay for it. Who is it?

There is Dollaz.club, simply calls itself Dollaz, and there's a mirror site Dolz.club, which is named "Smart Dollaz". Both sites are identical. Dollaz works as a PPA (pay-per-action) affiliate and makes a small commission every time a user downloads a smartphone app that it recommends. Subsequently, if the user spends money on the app, Dollaz may receive a percentage of the amount they spend.

Nothing's wrong with receiving a commission for helping the companies sell their apps. What's wrong is the grossly deceptive method it's using - as you may have noticed already, it falsely offers to pay you $30 each time you install an app on your phone. Dollaz's aim is to get as many people to sign up and install these apps so that they can make as much commission for themselves. To get as many people to join, Dollaz also offers money for doing some other ludicrously simple tasks, such as;

The "money" will be added to your Dollaz.club account immediately each time you complete one of these tasks, which will motivate you to carry on doing even more tasks.

The catch is, you'll never actually be able to cash any of it. When you send a withdrawal request, they will eventually reply to say that your activities are "not authentic", therefore you're not entitled to receive any benefits. Your Dollaz account will then be canceled, and you'll lose your access. That'll be the end of it. 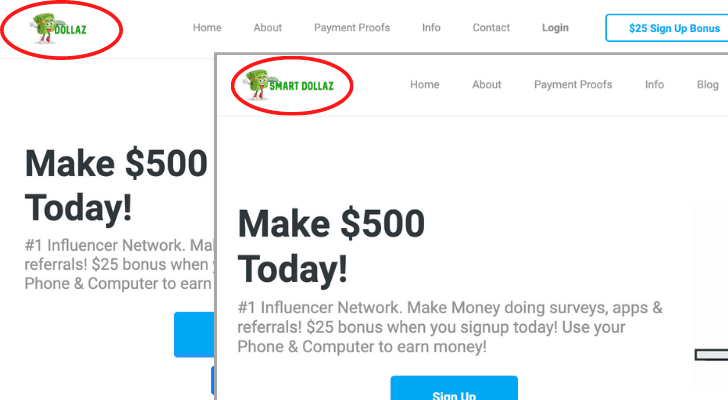 How Do We Know Dollaz Will Never Pay?

We know that Dollaz and Smart Dollaz never pay users a single dime because these sites are almost an exact copy of previously released scam sites, KashTree, which in turn a copy of PaidNova, NiceCash, and vice versa. If you search these names on social media, particularly on Twitter, Instagram and Facebook, you'll find numerous complaints by the former users.

And Why Won't They Pay?

Earlier I explained that Dollaz only receives a small amount of affiliate commission each time a member installs an app. The commission that Dollaz receives can be as low as less than $0.50. Some large brands may pay them a little more than that, and some pay even less. Now, how can Dollaz pay its users $30 each time while it only receives more or less 50 cents? It can't. Dollaz cannot pay you that kind of money because it's not making money!

Dollaz claims itself to be the best influencer network. But firstly, you know it's not true - if it was so well-known, it would have been featured by global news media and talked about by "real" influencers and celebrities. There would have been some shares in the stock market, too.

And secondly, there is no such thing as an influencers' network. Different influencers "influence" the public with different niches, you see. Fashion, politics, gourmet, some other geeky stuff. There's no reason why different famous influencers join one centralized "network".

And lastly, if you're looking to become an influential person using whatever you do, look at what Dollaz is trying to get you to do. It encourages you to share a link and simply say "Dollaz will pay you! Join me!" without explaining how the business works or what kind of quality it provides. (Well, there is no business and there is no quality!)

The "About Us" page says that Dollaz has "paid" $2 million to over 200k members, without explaining how so much money was funded in the first place - the claim is obviously not true. It also says that Dollaz was founded in 2018, but the whois registry confirms that the websites were only created in the past few months; dollaz.club in June 2020 and its mirror site, dolz.club in September 2020.

As you may have guessed by now, the "testimonials" by the users are fake - the photos are just free stock photos and the same testimonials are used in multiple sites owned by the same scammer. The ones used for Dollaz and Smart Dollaz are exactly the same as KashTree.

Payment proofs - serious of screenshots that show a payment notification, without displaying who they are or what they did to receive money (well, because the whole thing is fake!) These "screenshots" can easily be made using free graphic software. They don't mean anything.

Is Dollaz a Scam?

Well, you haven't spent any money with Dollaz, so you don't technically call it a scam. The only thing that Dollaz steals from you is your time. If you already had a few hundred dollars in your Dollaz account, you may be hugely disappointed to learn that you can't get any of it. But there's no way you can claim the money because you haven't "earned" it.

You see, if you had contributed some real work, you could have legally claimed at least some of it. But what you've done is merely to install some apps and share a link on social media here & there... These are things that any child can do. If you were to seriously take legal action and sue Dollaz, the court would only order them to pay you for the value of work you provided, which would be...a few cents?

So I suggest that you forget this silly joke site, and if you're willing to start making serious money online, start learning the real online marketing techniques!

Stay away from Dollaz Club, Smart Dollaz Club, or any other sites that offer such a lot of money for taking "tasks" that are not really tasks. You can make $500 today in your Dollaz account but you can never actually have it. And you know what, not only will you be wasting your precious time but you'll actually be helping those companies waste money on advertising their apps. It's deceptive and unethical.

If you're interested in building your own website and making money with affiliate marketing, join me from the link below for free. I've been with this all-in-one community for over 5 years now and find it one of the most sustainable and fulfilling methods myself. See if this is something you want to do.

My Mobile Money Pages Review – None Of This Will Work!

My Mobile Money Pages Review – None Of This Will Work!

4 of the Best Sales Email Signatures That Actually Close Deals

4 of the Best Sales Email Signatures That Actually Close Deals