So I decided to write The Great Heist review because I was fascinated by the sales video. Like a moth to a flame (not really). Not that I believed what he said ("the world's first and only messenger based marketing profit engine" that could let you earn $4k per day). But because of the way this Northern English man reads out the script in the video - so fast & scary, as if he's selling a secret nuclear-proof tank or something.

Just joking, I decided to take a look because he mentioned a messenger-based marketing method, specifically on WeChat in China. I knew this very product was previously named "Club Shanghai". But since the members' area is supposed to be updated on a monthly basis, I was expecting some pieces additional information.

There wasn't. The Great Heist (Club Heist) turned out to be simply a rehashed version of the Club Shanghai. Absolutely nothing new.

Yes of course, I will claim my money back as soon as I've published this review!

The Great Heist is not the "world's first" as the sales video claims. It's not a "profit engine for absolute beginners" but it's a set of 2 x downloadable ebooks, written by Robert Walter. That's all. Either the seller is Robert Walter himself, resell rights are attached these books, or the seller are selling them illegally. The ebooks are;

There are some totally unrelated extra materials but 2 of which are duplicate copies. They are; 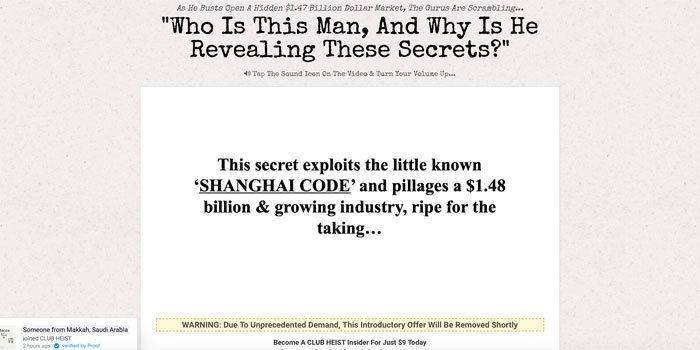 Rehashed Version of the Club Shanghai

The Club Shanghai was out for sale earlier this year, the sales video of which was also making an unrealistic income claim. Either because the sales dried up or the product received too many complaints, the seller has decided to sell exactly the same product but in a different name, The Great Heist.

The Quality and Integrity

I personally think the content (including extra materials) itself isn't too bad. The set of ebooks provides a variety of ideas to an online marketing beginner; how chatbots work, about the Amazon affiliate program, how to sell on eBay and about cryptocurrency Airdrops.

What's awful is the fact that the seller has pinched some already-available materials from somewhere (not the heist!) and quickly shoved them all in one website. They're bad for two reasons;

And talking about the false claim - the subject that the seller talks about in the sales video is how to make money using a messenger-based marketing method. Entirely. Apart from the cheap soppy story, of course (his wife and children left because he had no money).

It turns out that the product is not The Great Heist. Not The Club Shanghai either. It has a name - "The China Secret Part 1 & 2" by Robert Walter. To make it a little worthier, the seller had added a few more totally unrelated ebooks.

Needless to mention - the seller claims he's able to live in an "ocean-view condo" after 2 month with no technical knowledge. Just by reading a couple of ebooks? No chance!

What Makes WeChat So Special?

The seller talks in the video that the majority of online commerce in Shanghai happens through WeChat's messaging platform. And says he got all the secrets from a group of Chinese computer science gradates in Chicago.

I decided to get the Great Heist (and I assume many others would do), because I wanted to know the secrets.

So what makes WeChat different from other messaging platforms like...say Facebook Chatbots?

The answer is - I don't know, it never tells you! WeChat is never even mentioned anywhere in this product!

Next I'll briefly look at the actual ebooks. The Members Area has 3 sections; (1) The Great Heist (The China Secret ebooks), (2) Cryptocurrencies and (3) E-commerce. (2) and (3) being totally different ways to make money online.

(1) The Great Heist Blueprint a.k.a. The China Secret

I find it useful, not that I'll be using a chatbot for Facebook but to understand the psychology behind it - both the creators' and the recipients' point of view.

The seller of the Great Heist is a liar, no doubt, I will get my money back. But I'm keeping these ebooks for a little while.

In Part 1 (book 1) it explains all about marketing via Facebook messenger. It's lengthy and at times just theoretical, for example "First go to ClickBank and pick a niche, then get traffic using Facebook ads" - yeah, it's easier said than done.

But Part 2 is a step-by-step to using ManyChat with lots of screenshots. The writer says "I emphasize the importance of keeping the flow very logical" but he doesn't explain it any further - I would have liked to see some more examples.

This is where I felt baffled. At first I thought there may still be a connection between this and the Chinese secrets, but that's not the case. There are two materials;

This section is harshly added, and not maintained. As I mentioned earlier, there are two separate buttons for the same ebook, and where it says video training, there isn't a video.

All you can get is 3 x ebooks about [1] Shopify [2] Amazon affiliate and [3] how to sell on eBay, respectively. Looks like they are part of the same package, possibly sold as a PLR product elsewhere. The eBay book mentions drop-shipping, which has been banned by eBay for some time now, which proves that the ebooks are outdated.

A Phrase That Smart People Never Use!

First of all, e-commerce was never mentioned in the sales video. It's a subject that the buyers wouldn't expect to show up here.

And secondly, we see one of the phrases that are often seen but smart people never use - "the list is endless."

There are tons of different approaches to e-commerce, from Shopify, to selling on Amazon or eBay, to drop-shipping, the list is endless.

It's not endless. That is the list and there's nothing else to add. A drop-shipping is a method, others are brand names. They should sort out the "list" before they speak, and if they think there are more approaches, they should explain why they're not adding any more examples to the list!

The product is initially sold for $9 for 14 days but at the expiry (15th day) you'll be charged with $37, and every month thereafter. However the seller offers a refund if you're not happy and if you claim within the first 74 days (14 days plus 2 months).

Since this is a ClickBank product, I suggest that you should contact the ClickBank support and claim your money back.

The Great Heist Pros and Cons

When you look at the volume of the content - several ebooks - the price of $9 may not seem too much to pay for. The books may come in as a good read for new internet marketing hopefuls. Especially for those who wish to start a business online but don't know what options are available. But because the way the product is sold is grossly misleading, and the fact that it's the exact copy of another product, I do not recommend it.