What a coincidence, Deidre Chambers. I decided to write a Smart Cash App review because I had recently received an email invitation from the "owner" of this product, whose street address was somewhere I personally knew. I used to work there! My best friend still works there, it's a commercial building, and there's nobody by the name of Robert Fisher (who claims to own Smart Cash App) at that address - at least not for the past 3 years that I know of!

For that reason assuming it is a product created by an unknown scammer, my Smart Cash App review reveals it is actually a rehashed version of some other products rinsed and repeated. It also reveals how different it is from what he claims to invite you in. 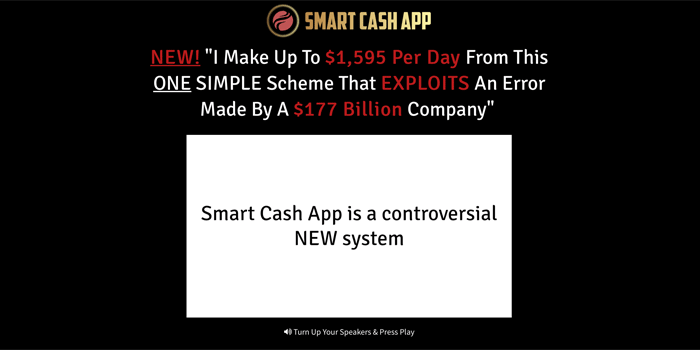 Smart Cash App is a rehashed version of Smart Money Methods, released in 2018 by another man named Mark Foster which I cannot recommend either. In fact some other products such as 24/7 Wealth Club and CB Wealth have exactly the same format. It is a compilation of PLR products consisting of PDF generic guide to Amazon affiliate, and some "how-to" social media marketing videos.

Misleading Factor 1: Use or Odd Numbers

Firstly the seller randomly uses odd numbers in the video. This is a classic but outdated trick to draw the viewers' attention, often used by scammers.

The video is 15 minutes long, and he mentions "3 minutes 35 seconds" twice, but he barely tells you anything - I mean, anything. There is nothing that adds up to 17 clicks in order to "set up" in the actual product. And there is no proven calculation to show that the daily earning amount should be up to $1,595, because you know, the number is simply made up.

If you earned $1,595 per day, that would be $47,850 per 30 days. Of course it would be extraordinary if you could earn that kind of money. But the product is only a general guide to Amazon affiliate program and social media marketing guide, you will never make such a large amount just by learning theoretical how-to's from this product.

Halfway through the video, this man says, "Let's talk about how Smart Cash App actually works, and why it works so well." Unfortunately he never explains how this "app" actually works or why it works. It is not even an app.

The fact that there is no mention of Amazon guide means that, in theory, viewers who already know a lot about the Amazon affiliate program can be fooled into this video invitation, hoping to make bigger success online and buy Smart Cash App.

The seller also says his product offers an "amazing new trick to earn very real profits before almost anybody else." But as I mentioned earlier, there is no new trick. There are already thousands of similar guide ebooks and video tutorials available out there that are not practically useful. Smart Cash App is just one of them.

So Smart Cash App is a copy of Smart Money Methods, which will teach you how to become an Amazon affiliate. It will also teach how CPA (cost per action) marketing model works, which is a basic knowledge that any affiliates should have. Lastly, it will teach social media marketing including Instagram, YouTube, Facebook, Twitter and SnapChat.

This is bad because;

The guide starts with "What is Amazon.com?" so it might help you if you wish to do something to earn money online but don't even know what Amazon is. Have you ever heard of Amazon online store???

Even so (even if you didn't know Amazon), I wouldn't recommend you to spend $37 on this product. I'd recommend you to do some research simply by googling instead. We all offer this level of information for free through our websites and YouTube videos.

Is Smart Cash App a scam?

Had it been targeted to the right users (those who are totally new to Amazon, affiliate marketing and social media), I wouldn't have called it a scam. The seller is taking advantage of a vulnerable audience who still believes the existence of get-rich-quick schemes. By selling low-quality, generic guidance package which is unlikely to be what they're looking for. Smart Cash App is a scam.

One good news is that money back is guaranteed by the seller, and because it is a ClickBank product, you can claim your money back by sending a message to ClickBank support desk. You are entitled to - and you certainly should - claim a full refund for having been mis-sold a product that's not how it was described.

Don't buy Smash Cash App. Imagine you ordered a Gucci bag but what you received was a "How to buy cheap eco bags" guide DVD. This is equivalent to that.

If you've accidentally bought it, I suggest that you should claim your money back via ClickBank support for a wrong product that's been mis-sold.

Is “Affiliate Marketing” A Crucified Phrase?

Is “Affiliate Marketing” A Crucified Phrase?