SoManyHits.com is a typical kind of site that promotes "making money for the sake of it". Unfortunately the idea is oldfashioned and I don't see anything useful being sold to users, which may mean there's no real quality in it. The critical problem is that your audience is your competitors. Today in my SoManyHits.com review, I will explain why you shouldn't be clinging on to a system like this. Otherwise really, you'll be left behind. The "make money online" industry is competitive. New online marketers learn to run a successful business by standing out from the crowd and providing trustworthy values to users. You can't really catch up with them with a scheme like this one.

SoManyHits.com (SMH) is a link shortener and ad-exchange service, but it's heavily focused on recruiting others, so it is effectively a Pyramid scheme. Like many other similar networking sites, it offers a peculiar commission pass-up system.

The actual link shortener is to direct users to SMH itself, therefore I'm afraid to say it's pretty spammy. Whereas generally, an ad exchange is considered ineffective, and the SMH is no exception. Other features such as "list builder" and "URL tracker" only exist to promote SMH itself, so there's not much you can do if you're looking to promote real niche affiliate marketing business, in my opinion. SoManyHits.com is free to join. 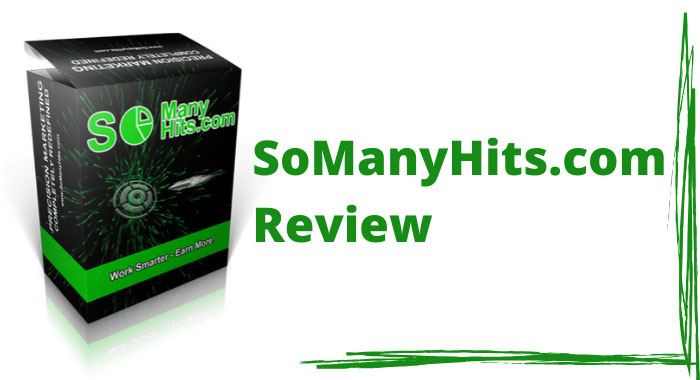 SoManyHits.com does allow you to promote your website or any affiliate sites, mainly in two ways;

Unfortunately, I wouldn't recommend you to use either of the features and here are the reasons;

Well, as I already mentioned earlier, you can never really expect a good response from an ad exchange site for an obvious reason; other members are equally busy promoting their campaigns. Everyone's in it to sell, not to be persuaded to buy anyone else's products, you see what I mean?

People who regularly use ad exchange often don't realize this fact and, they blindly promote a dacade+ old landing page with a boring sales copy such as "make $1k a day complete autopilot" or "5,000 leads a day while you sleep". Nothing's wrong with these people running their campaigns that way as long as they're happy, though. And I'm sure if a campaign is exceptionally unique, it might draw good attention... Like a fortune-telling site? Strange-But-True tales? (I'd be interested!)

SMH's link shortener is not really a shortener. When a user clicks the shortened link, they'll be directed to the SoManyHits.com landing page first, they'll be invited to join in, invited to subscribe to the browser notifications, before they finally get to see a page that you promote. I think it's far too spammy and it will rather confuse your followers/prospects if you want to promote your own campaign. You might as well share a direct link to SMH and share another link to your own page on separate occasions.

Why Would I Call SMH A Pyramid Scheme?

According to Wikipedia, a Pyramid scheme is a business model that recruits members via a promise of payments for enrolling others into the scheme, rather than supplying products. And that's what SoManyHits.com is. The link shortener and the tracker are directly related to the enrollment, which means you'll barely receive anything beneficial outside the SMH membership itself.

The Commission "Pass Up" Plan

Okay, I've said this many times before and I'll say it again. If you want to work for yourself, on your own initiative, make money by doing what you want to do, by recommending products to others as an affiliate... Don't be fooled by a complex commission plan when it logically doesn't make sense to you. SMH's plan does not make sense, and I'll tell you why.

A member can only become eligible to earn a commission if they successfully recruit 3 people or more. They can only start earning money if their 3rd referral onwards spends money on SoManyHits.com.

For example, if you only refer 2 people to SoManyHits and these 2 people spend money, the commission will be paid to your sponsor, not to yourself.

I'll rephrase it. If you were genuinely to believe in a product, who would be the first person you recommend it to? Your best friend, your best student, or whoever you most care about, right? But with the SMH's rule, you couldn't because the first person you recommend it to wouldn't be sponsored by you. They'd be sponsored by YOUR sponsor. Doesn't that sound somewhat ridiculous? You'd have to get 2 people that you care less to join first, then start inviting your real referrals to make sure you'd be sponsoring them.

Perhaps it would be a good idea to create 2 x fake SMH accounts and send invites to yourself before you refer it to real people. That would be totally unnecessary exercise, but that would be the only way to justify your entitlement as an affiliate.

Don't get me wrong, an MLM or network marketing works in a team, so I'm not saying this "commission pass-up" system itself is wrong. The money spent by whoever down the line may benefit the team as a whole. If you want to work as part of the team, then it's your call. Just like working as a sub-contractor for a company. But I said at the beginning of this section "If you want to work on your own initiative..." If you want to earn commissions in affiliate marketing as recognition for the effort that YOU put in, then you wouldn't want to be part of that kind of peculiar compensation plan. That's what I believe. Does that make sense?

The list building facility that SoManyHits.com offers is another thing that I think is misleading. And this is a problem often with a pyramid scheme where nothing really is to sell. Here are some reasons that I can explain;

The "list of leads" it refers to is a list of your SMH downlines. Your referrals, your referrals' referrals, and so on - they've all joined SMH because they were attracted to the ad exchange, spammy link shorteners, and the compensation plan, they're all hoping to make money. They're all your competitors, not followers. You just joined earlier than these people on the list, that's all.

What it means is, it would be different if SMH were selling something valuable - a training course, web tool, a genuine link shortening service, for example. Then your downlines would have a chance to go out and promote it "outside the circle". People may buy the product but not necessarily join SMH, and you still earn a % of the commission.

But when the product is only to promote SMH itself and your list of subscribers are all your competitors, what would you say to them in your email apart from "get more people in"? All the parties are in it to make money by endlessly recruiting new people in, hoping the new people will spend money on SMH so that they can make commissions. The system is so one-dimensional.

3. Promote Your Own Business To Your Competitors

You could however promote your own business or affiliate products to your leads in your followup emails... Then again, your leads are your competitors. How many of them would be interested? Have you ever seen Facebook groups for Bitcoin affiliates? If you have, you know what it means. Everyone keeps posting to promote their own Bitcoin affiliate site, no one's interested in anyone else's!

SoManyHits.com says, "as your traffic lines continue to grow, so will your mailing list." But imagine everyone in the list follows this logic, continuously grows their list (downlines), and sends out daily followup emails... There would be an infinite number of emails in the loop. As soon as you join SMH, you would start receiving regular emails from your sponsor, regular emails from your sponsor's sponsor, and all their sponsors, depending on the number of your uplines.

The good news (?) is, it's been a couple of weeks since I joined SMH and I haven't really received any emails from the uplines. Unless they've all arrived in my spam folder, in which case I daren't open any of them. I'm guessing not many members are actually using the list. There's a reason for it, and this is also critical...

Your list of leads can be exported in the CSV file, which can then be imported to your autoresponder. SoManyHits.com specifically recommends AWeber or GetResponse. Yes, these are the two email marketing service providers who allow the "make money" niche. But neither of them easily allows you to import a list and simply start sending campaigns. They'll require you to send a confirmation email to make sure all your imported leads have properly opted in. AWeber may allow you to omit this procedure, but then you'll risk receiving complaints. After all, importing a list of leads via a CSV file is never really ideal.

The Platinum options are available for;

The track conversion feature appears to be good, but the conversion hit for a unique visitor will only be counted once every 30 days, rather than showing IP addresses. I'd rather pay a little more to use a decent tracking service such as Clickmagick to be honest. But I guess it's a low-cost option to place a tracking pixel on your "thank you" page.

Any payments you've made will be non-refundable, according to the SMH's refund policy.

I mentioned the phrase "one dimensional" earlier on, but another thing I've noticed is that there's no learning material. There's plenty of "how to use SMH" guide throughout the back office, but because it's solely focused on promoting SMH itself, if you want to run your own campaign, you're expected to have your own landing page. You're expected to know how to find referrals, so the scheme is not really ideal for newbies. And if you were to leave the scheme, there's not much (i.e. techniques) that you can take it with you.

Unless your sponsor takes you through... But all I get from my "sponsor" is a daily email, which has no quality and he randomly tries to sell different affiliate products one after another. I'm not impressed, and this is another reason I think SMH is also one-dimensional.

If you want to learn sustainable online marketing methods, I personally wouldn't recommend you to rely on one MLM scheme, especially a scheme like SoManyHits.com that doesn't provide decent business products that are actually usable. At least it's free to join. Perhaps you can try it yourself and let me know what you think by leaving a comment below. Good luck!

How To Use Your Blog To Write A Book

How To Use Your Blog To Write A Book

10 Ways To Be More Productive When Working For Yourself

10 Ways To Be More Productive When Working For Yourself