I've been invited to join the Organic Prospects so I did a little research to see if it's any useful. The site is old. It doesn't seem to have been updated for some time, the service that it offers is far too unrealistic. It may have worked a decade ago, I don't know, but it sounds too good to be true considering the current prices in the same market. It just didn't convince me to join. My Organic Prospects review is therefore on a speculation basis, but I hope my thoughts will help you decide whether you want to give it try or not.

What Is Organic Prospects?

The service is nothing to do with organic traffic. For a monthly fee of $29.95, the Organic Prospects (OP) claims to provide you a list of 70 prospects. 80% of the prospects are from the US and the rest are primarily from the Tier 1 countries (Canada, Australia, and the UK.) 75% of the prospects have a "genuine interest" in the home business niche.

It has its own mailing system, so you can send your email campaigns directly from your platform.

OP is also a multi-level marketing scheme, offering 5 levels of recurring commission. Apart from the monthly fee, you're required to pay a $30 setup fee which is non-refundable. What kind of "setup" is needed is unclear.

70 prospects a day means 2,100 per month. Selling such a large number of leads for such a low fee is like selling a brand new car for a couple of hundreds of dollars, something's got to be wrong. The fact that the initial fee of $59.95 ($29.95 + $30 setup) is non-refundable also suggests that the actual service may be defunct but it's still being promoted by the remaining affiliates for MLM purpose. I can list up quite a few red flags as follows.

If I compare the number of leads that the Organic Prospects claims to provide with solo ad traffic services, the price is far too cheap.

If someone was selling something for an extreme bargain price, say, a quarter of a normal price, you would question the quality of it, wouldn't you? What the Organic Prospects is offering is 70+ times cheaper than a normal price, which is beyond suspicious.

Are these "prospects" bots, generated by software, perhaps? Bots can open your emails and click the links in your email, so they can easily fool your open/click rate stats, i.e. appear as if you have some responsive leads.

More serious note. If the Organic Prospects is saying these prospects are real people, then it's openly breaching data protection regulations. The homepage says;

It means that these prospects never consent to specifically sign up with you or any other OP users. But OP is freely passing on the sensitive information they harvested to you and advises you to do whatever you like with it, without their permission.

The Organic Prospects is selling thousands of users' personal data every month at an abnormally low price. It proves that what it does is either of the following two.

Here's something more fundamental - if real human prospects were sold at such a low price, the Organic Prospects' service would have gone viral by now, used and applauded by countless online marketers across the globe. But it hasn't, and it tells you something.

Red Flag #4 - How It Acquires Prospects Is Not Transparent

How Organic Prospects acquires is unclear. The FAQ page says that it acquires home business prospects via the top 15 social media sites. It's full of expressions such as "efficient method", "a streamlined way of..." "absolute highest standard of genuine interest", none of which means anything, but it completely lacks a practical explanation.

It is possible to get users to sign up using their social profile "legit way", but there's no reason why OP should give out such valuable leads to the members for such a low fee. It's just not realistic.

The T&C page (https://www.organicprospects.com/terms.php) says that you can cancel the subscription at any time. Upon the receipt of your cancelation request, OP will simply stop taking the monthly fee. But what's already been paid will not be refunded.

But the reason stated on the page sounds peculiar, in fact, unfair. OP cannot offer a 30-day free trial, because they have "families to feed and keep the membership fees as low as possible."

If what they say was genuine - a sale price of 14 cents per lead is a result of trying to keep their profit margin as low as possible, then they wouldn't be able to acquire leads authentically.

Anyway, this is again, if a brand new car was for sale just for a hundred dollars, but no test drive was offered and no refund would be available once paid, would you be interested to buy it? I certainly wouldn't!

I cannot say this for sure without actually using it and presenting the data. But sadly, the majority of the relatively unknown mailer systems have extremely low deliverability rates, especially when they're part of a multi-marketing tool. Nobody's heard of the "Organic Prospects" as an email marketing service provider, which means that the emails you send from OP will be likely to land in the leads' spam folder. When it comes to email marketing, it's essential you use a reliable, well-known service provider, otherwise no point even trying.

OP allows you to download the list of the prospects and use it in your own autoresponder. But here's a catch-22 here - the majority of the "reliable, well-known service providers" don't allow you to import a purchased list of leads. They're likely to send a subscription confirmation mail to each of your imported leads on your behalf. The imported leads are unlikely to confirm because they've never signed up with you!

The setup fee of $30 is not explained. I mean, I'm not a developer but know that it won't cost any membership site owner any extra to physically add a new member. But a one-off extra fee of $30 upon joining, and nothing forever apart from the monthly fee? Anyway, from a user's perspective, you're supposed to be receiving the same service throughout. You're not receiving $30 worth of extra service upon joining, so it really doesn't make sense. 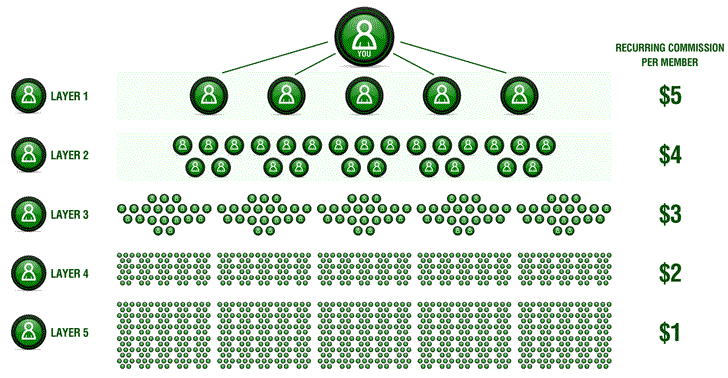 Organic Prospects offers a 5-tier affiliate program. You'll be awarded $5 every month for each active direct referral. $4 for your 2nd-tier downline, $3 for the 3rd-tier downline...and so on.

Your daily prospects of 70 will be doubled to 140 once you have an active direct referral. It means that although the terms state that you're not allowed to have more than one OP account, the more accounts you have, you'll receive more "prospects" per day for a lower price in theory. For example, if you refer your friend and work in an alliance;

While you have an active direct referral, your prospects with "genuine interest levels" will be increased from 75% to 85%. But again, whether one has a genuine interest in something or not is subjective. This "filter-out" arrangement isn't clearly explained.