InfluEarn and CashLoad are two identical scam sites, whose sole purpose is to sell users' personal data to malicious phishing companies. You shouldn't take anything that's being said in these sites seriously, in fact you should not be involved at all. If you have already signed up with InfluEearn or CashLoad, leave now, because you're only receiving nothing but damages from them.

My InfluEarn review / CashLoad review will explain what they do to scam people. The 'money' that your dashboard is earning is all fictitious, you can't withdraw any of it, and the "payment proofs" are all fake. Read on if you're interested to know more about it in detail - so that you won't be scammed in the same way again.

InfluEarn claims to be a market research panel, and CashLoad claims to be an 'influencer marketing platform'. They both offer gift vouchers and other rewards in exchange for answering surveys. PLUS they will let you 'earn' $30 every time you complete a survey. They will also credit $10 to your account every time you get your friend to join. Upon joining, you'll see a 'sign up bonus' of $25 already credited to your account.

You may be excited to see your account quickly earn as you complete these ludicrously easy 'tasks'. But there's one thing you cannot do - withdraw money. You will NEVER be able to cash it. 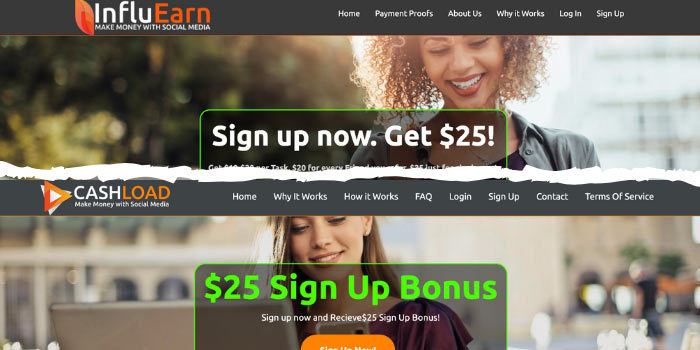 When you send a withdrawal request, you might receive an email that says it will take X weeks for the money to be credited to your specified account (PayPal, Bitcoin, Cash App or by check). But that will be it, you'll never hear from them again.

Send an email to the support, and your email will be either ignored or returned undelivered. If you make a complaint in any other ways such as via social media, they'll simply block your access to your InfluEarn/CashLoad account. Eventually when enough people are up in arms, they will simply shut down the sites.

...That's what's happened to other sites that are owned by the same scammer. Okay, now I will tell you why these sites are proven to be operated by the same serial scammer.

They keep duplicating and triplicating the same website and publish them using multiple URL's. All they do is to change the logo, change the design slightly and insert the new site title. But they don't check all the pages, often forget to overwrite the old site names. InfluEarn's terms page says it's SwagPay, and the fake payment proofs say it's CloutPay.

Both SwagPay and CloutPay have now been shut down after received so many complaints by the users 'for non-payment'.

"176 Westmore Mondaile Street Victorian 887 NYC" is a fake address that has been used by several sites, and we can assume all the sites who claim to have an office at this address are scammers - because it doesn't exist.

The pinned location in the map is the 5th Street overlooking Central Park in Manhattan. Both InfluEarn and CashLoad claims that the headquarters is there - no, there isn't.

Reason 3 - Their Sites Are New 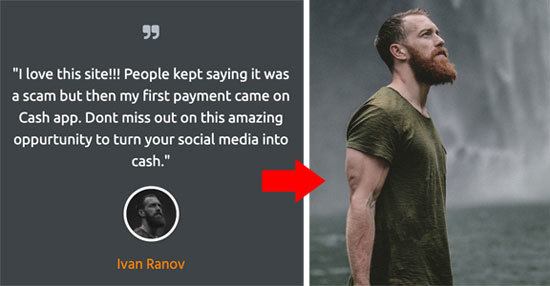 Photo by Jakob Owens on Unsplash

The man in the testimonial photo is not Ivan Ranov, his name is Jakob Owens (his Instagram account is here) and he's a multi entrepreneur. So this proves that the testimonial is totally fake - reason why "people keep saying it's a scam".

The payment proofs that appear in the sites can easily be created by using a graphic software. There's no credibility.

Now this is rather serious. If you haven't noticed it, this is something you should remember - data protection regulations.

Legitimate market research never asks your personal data - all the need is what you are, not who you are. Right? They might ask what age group you are in, sex, living status, educational background, etc. But they never ask your name, phone number or anything personal.

I live in the UK, so the European law currently applies over here, and if you live in the USA, there are numerous state laws. The details may vary but the most basic rule is universal; the data protection regulations impose restrictions on businesses relating to the collection of personal data. Not just market research companies, but this applies to any companies. They should NOT collect your sensitive data unless they need it for a reason.

When you go to "Task Walls" and start answering surveys in InfluEarn or CashLoad, the first thing they ask will be your FULL personal data. Your full name, street address, phone number and email address. Also your birthday. That's a regulation breach - because these survey companies are spammers. They're not legitimate. They're fake.

You might think, they need your full address because there's a prize draw going on. Upon completing the survey, you'll be entering a competition to win a shopping voucher, so if you win, they can send it to you...

If the prize competition was real and the market research company was real and legit, all they need would be your email address in the first instance. They could only send an email notification to the winners AFTER the draw, and ask your name and street address. And once the winning prize has been sent to you, they should be safely deleting your personal data.

ALL the prize entries that you see in InfluEarn and CashLoad are fake. There are no winning prizes, you'll never win anything. The 'tasks' are there to collect your personal data, so that they can sell it to many other illegitimate advertising companies, who will then send you unsolicited emails, texts, phone calls, and junk mail by post.

More seriously, they often ask your birthday including the year of birth. If it was a genuine marketing research company, that would be something that's absolutely unnecessary. You should be wary of that because they've got your full name, full address and birthday, they can use the information for a lot more malicious purpose (borrow a lot of money from a loan company using your name, for example!)

I have received numerous messages from the victims of other similar sites (such as ViralPay, EasyDollars, etc), asking if there's any way to get the money that they've 'earned'. Unfortunately there really isn't.

If you have tried either of InfluEarn or CashLoad already, you haven't been scammed just as yet - because they haven't actually stolen your money. The worst thing that's happened to you is that they wasted your time. Hopefully, you won't get into any nasty troubles in the future and, the only damage will be to keep receiving annoying spam emails/texts/calls - hopefully nothing else.

If you think about how businesses may work, you know what these sites claim is far too unrealistic. Who in this whole world would give you a $25 cash just for signing up or $10 cash just for referring it to your friend? Nobody would throw money away by distributing it randomly that way.

Imagine you own the richest company in the world and you are worried because you have too much money - what would you do? You would give your money wisely and/or ethically. Give it to charity groups, or pay people that you trust. Not to some random social users, it wouldn't do any good for you, nor for them. It would be extremely unfair.

Put It This Way

Did you know, there is NO such easy way to make money online or offline. When a good online business expert or a tutor explains a particular method or procedure, they explain easy parts, tricky parts and advanced parts that you need to learn. But they never, ever say the whole systems are 'easy', because no such thing exists.

Look at InfluEarn and CashLoad - the whole thing is too easy. It means it's not a job. Then it means it's not producing anything money's worth, right? What you do - just to sign up - is not $25 worth.

Don't believe in any sites such as InfluEarn and CashLoad - remember the old saying, if it's too good to be true, it most definitely is!

How To Make Money As Amazon Affiliate

How to join Amazon Associate program and safely promote their products.