BitLaunch is a privacy focused hosting service with some special traits that is not found in many other hosting providers. They only require an email to get started with spinning up VPS in seconds, and they allow you to pay exclusively with crypto currency such as Bitcoin, Ethereum and many more. They provide servers from themselves, as well as hugely respected hosting providers, DigitalOcean, Vultr and Linode.

Alongside this, they offer a developer API for developers looking to automate server provisioning or build tools on top of what BitLaunch offer. They have an affiliate program with a 20% recurring commission on conversions. 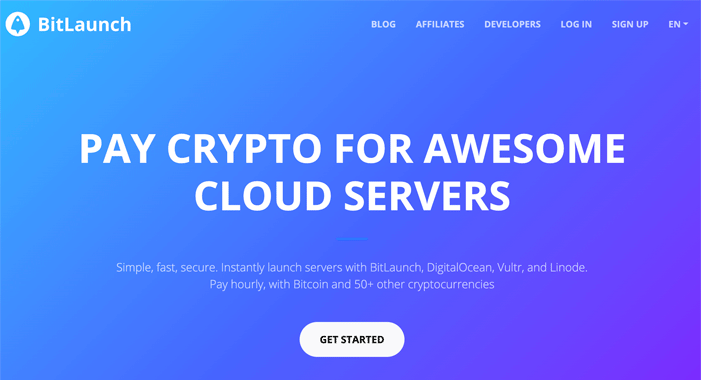 On their homepage, BitLaunch claim to be simple, fast and secure, with the addition of  paying hourly for your server. I wanted to dig into their service to try and test these claims for myself. Sometimes I like to have a non-commitment to my VPS server, say for example, If I wanted a quick anonymous VPN, so hourly billing is something that I’ve been looking for.

Making an account is simple. I was sure they would ask for more details sometime down the line, but it turns out all I needed was an email.

Fast Support and a Free Trial

Upon logging in I was greeted by the following message: 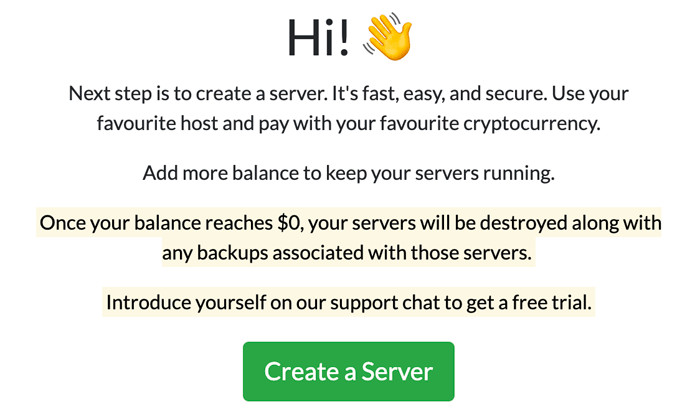 “Introduce yourself on your support chat to get a free trial”. This took my attention right away. I spotted BItLaunch’s support icon and sent them a message saying hi. They got back to me in just a few moments asking me how I found them. After a quick back and forth, they said they had credited my account.

It turns out, they weren’t kidding when they claimed it was fast.

It only took me 5 simple steps to make a server (there is a 6th one, but it’s optional).

You’re able to choose from BitLaunch, DigitalOcean, Vultr Or Linode. I went with a BitLaunch VPS.

2. Choose an Image or an App

Next, I chose Ubuntu 20.04 for my Linux Distribution, but before this, I also looked at what BitLaunch as a whole has on offer. There is quite an offering here with lots of choice.

From Linode, they offer a wider range of Linux distributions, including Arch, Gentoo, Slackware and openSUSE.

As for BitLaunch servers, being as privacy focused as they are, I wasn’t surprised to see WireGuard and OpenVPN one-click apps from them. Being able to buy a VPN with Bitcoin is a real plus, especially as it’s your very own anonymous VPS, which is beneficial for several reasons that I won’t go into there. BitLaunch also offer Windows RDP servers. (Windows 10)

BitLaunch has three regions on offer. Amsterdam, London and Los Angeles. These three locations are great for a wide range of customers, covering both the USA and Europe. They do not have quite as many regions as the other hosts, so users may find themselves going for a different host choice such as Linode if they want an Indian or Asian location.

Once again there is quite a wide range of choice here. BitLaunch servers are available with a variety of specs at a competitive price. BitLaunch also offers CPU optimized servers from DigitalOcean and dedicated CPU instances from Linode. 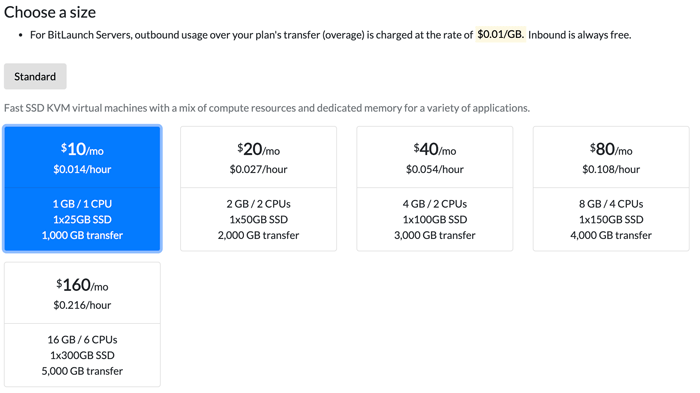 5. Set Authentication Using a Password, SSH Key or Both

This is quite self explanatory. No need to wait for an email with your password, you can set it here. An SSH key is usually recommended for the best security.

After making these choices, it took less than 30 seconds to get my server IP and be able to log in using SSH.

All BitLaunch servers come with SSDs for fast storage, good amounts of RAM and use KVM virtualization.

The people at BitLaunch have made it simple and fast to pay for servers. They let you top up as little or as much as you want, providing you pay at least $20. I questioned them on their support chat as to why this is. Their response was that it’s about keeping abuse minimal. Whilst this may turn some people away, I think it’s an ok compromise for the service they are bringing. After choosing to pay with Bitcoin, I was presented with a QR code, an address and the amount of BTC to send.

After a few confirmations, the balance went into my account. Overall the process was smooth and easy. Unfortunately sometimes confirmations can take some time, so results will vary depending on your wallet and fee. They recommend not sending from an exchange.

One of BitLaunch’s core strengths is that you only pay for the hours that you have the server. No need to pay up front for an entire month when you’re not sure how long you want the server. If you decide to destroy your server and come back some time later, you will not be charged another cent. As someone who likes to change VPN IP occasionally, I found this to be most useful feature to BitLaunch’s billing structure.

One thing you must absolutely watch out for is your balance reaching $0. Servers are stopped when this occurs, and eventually destroyed. This may catch some users off guard, but they provide plenty of warnings with emails and messages in the interface.

I questioned their support channel about this, and they say whilst this has to be a reality of their product, they can provide you with more time or even let you go for a while with a negative balance if you simply ask.

Whilst not a developer myself. I did take a look over their developer portal. Users here will find API documentation and a CLI tool for programmatically using their BitLaunch account, giving users the ability to create servers and top up their account.

BitLaunch have an affiliate program, which looks to net anyone looking to market BitLaunch a 20% commission for every sale. Whilst this review will not go into their affiliate program in too much depth, something to point out is that they can payout with Bitcoin for any crypto loving marketer out there.

As you can see from above, BitLaunch offers the best features from various hosts and puts them all together in a stellar service. Hourly billing, fast provisioning, plenty of choice, and great support, all brought together in an easy to use user interface which makes creating servers a breeze. It’s absolutely worth at least giving their trial a go.