Okay, I was invited to buy Automatic Home Websites. I watched the sales video and found it full of false promises, but I opted in to check what this one was about...and immediately saw the name "Website ATM". This is a classic, notorious and very "successful" series of scam products that's been around for years. No, I'm not wasting $47 on the same "serial scam" product again. So today, my Automatic Home Websites review will explain what's wrong with this product, and show you some of the typical warning signals to watch out for when you're looking for online business tools.

What Is Automatic Home Websites?

Automatic Home Websites (AHW) claims to help you make an extortionate amount of money by doing nothing. All you need is a few clicks to set up either on your computer or smartphone. The seller never explains what's involved, but she claims (I'll call her "she" because a female voice actor narrates the video and calls herself Pam) to do 95% of work, and also your money will be paid by her.

It sounds like a ludicrous charity, giving money away to anyone randomly who happens to visit this site, and of course, it's never the case. The whole story is fabricated.

Automatic Home Websites is in fact, made to deceptively invite users to buy a previously released scams product - Website ATM, which has been rehashed a number of times using different titles, such as Website Profits Pro, Profit Point Autonomy, Cashpoint ATM...to name a few. The support email address is shown as support@easykits.org, which is dormant now, and again, EasyKits.org was branded as a notorious scam a few years ago.

For $47, you'll be provided with access to an e-commerce website template. But it's not usable on its own. You'd have to have relevant skills to customize it, and you'd have to find a good traffic source and have a budget for it. Of course, none of this is told before the purchase and as a newbie you have no idea how to start. So you'll be invited to buy expensive upsells one after another to make it work. In other words, AHW will not help you make a single dime. 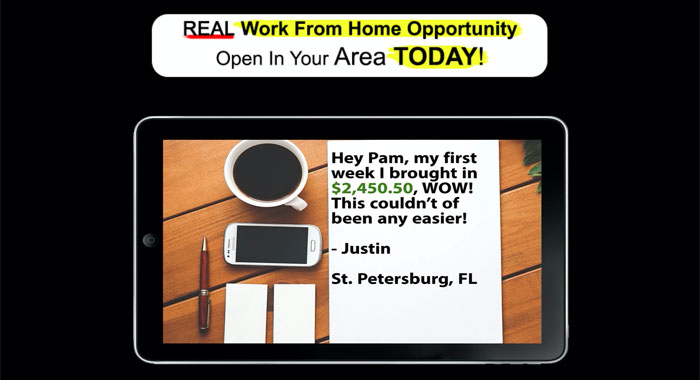 Who's Behind Automatic Home Websites?

We don't know who's behind it. The sales video script is simply read out by a voice actor, and the seller calls herself "Pam" which is just a pseudonym. The video is much shorter comparing to previous other "Website ATM" related product videos. Others all talk about the seller's background (sob story), how they found the system, how they enjoy the wealthy lifestyle (vacations, no bills to worry about, etc.) and they all use fake testimonial videos. Whereas this one's short and no actor appears in front of the camera. A little too simple and "economically made" comparing to others. The video is not broadcast via Vimeo or Wistia but via YouTube, and the site does not have an SSL certificate. So it may be owned by an affiliate, we never know. Although an affiliate disclosure cannot found anywhere within the site, it doesn't seem to matter to someone who tries to make money by selling scam products.

If you carefully listen to the video content and focus on what kind of product the seller's offering, especially;

Then you'll notice that the seller never talks about either of them. Here are some of the typical red flags you can spot in the Automatic Home Websites sales page and as well as any similar sites in the future.

In the video, the seller simply calls herself Pam. But she never introduces her professional background in relation to internet marketing. There is no photo of her - we know not everyone is keen to show their face, but she's not a social media user, she sells a product - charges customers - if she was legit, she would at least try her best to gain trust from the public.

#2 The Site Is Not User Friendly

It's a video-only sales page, it may appear to be nice and simple, but really, if you want to spend money on the product, you want to check how authentic it is, don't you? Unfortunately, the site does not have a proper navigation menu apart from "Terms" and "Privacy Policy", which both have a standard format (can be used for any other product sales website). No supplementary information to explain the authenticity of the product.

At the beginning of the video, she creates a mysterious "Automatic Home Website account" for someone else, and gives it a click. She shows you a screenshot of a fake account balance which is zero, and it mysteriously grows to $175 within a few minutes.

You're not 3 years old, I hope you don't get overjoyed by looking at the screenshots like these - anyone can make any of those by using graphic software. Without explaining how the money comes in, from where, and via what kind of intermediary, this is just another cheap trick.

#4 The Seller Is "Reluctant To" Explain How It Works

This makes no sense of whatsoever - the seller says,  "I can't share with you how Automatic Home Websites works in the public video because we don't want this software to fall into the wrong hands." What kind of "wrong hands" she's referring to is unclear, but she's worried about it because;

And we know the answer is 3!

#5 The Seller Claims To Pay You Directly

The seller of Automatic Home Websites says as if she is the one who pays you directly, such as "I let a few people join earlier this week and I was already able to pay them..." If a website was to generate money and you make a profit from it, you should know where the money comes from - who the customers are, what kind of product they spend on, and what kind of margin (percentage) you will be receiving.

She wants you to pay $47 to "show your commitment" - this implies an "advance-fee scam". I'll pay you a large amount of money but you have to pay me (lesser amount) first. Do you remember "Nigerian Prince" scam emails that were going around for years? (I still see similar emails from time to time, and wonder if anyone believes those in this day and age! ?)

The seller says that the so-called "gurus" are all liars because they claim to offer "click a button and make a million dollars overnight" schemes. Because nobody can deliver so much money overnight with one press of a button. But she insists that hers is real simply because it generates a few hundred upwards to a few thousand dollars.

That's not a valid explanation either, and it doesn't take away the fact that the Automatic Home Websites' seller is making an unrealistic income claim.

A scarcity marketing technique is proven to work, and used by anyone who sells products or services. For example a seasonal discount campaign (e.g. the price will go up after midnight on Sunday). The technique is beneficial for the seller for mainly 2 reasons;

With AHW, the seller simply keeps saying there are only a few spots left for no reason. She also says "I could be closing the doors tonight", which of course is a false claim because the site has been there for a long time. But you don't know who the seller is, you wouldn't want to make a payment to a stranger who says "I could be disappearing soon".

I've mentioned earlier that Automatic Home Websites is actually another scam product called Website ATM, which in turn is a rehashed version of EasyKits.org. In the AHW video, the seller tells you that your payment is covered by the 60-day money-back guarantee. But when you go to the payment screen, it says the guarantee period is 90 days.

Which one should you believe? Neither. Because over the years, it's been reported many times that the seller ignores your refund request. After all, there's only one answer to Automatic Home Websites - don't buy it!

Find Out What Kind Of Work Is Involved

The type of message I get most often from my readers is, "If this is a scam then, which one should I trust? I need to work online and make some money."

If you asked the same question off-line (say, to a company owner), they would ask you in turn, "well, what can you do?" Exactly the same applies to online business.

If you're looking to work for someone and get paid for your time, much as you have a choice from different types of jobs to do, they have the right to decide whether to pick you or not. Easy jobs such as answering surveys and watching ads do exist - but they can be done by anybody, can be done by a child, which means the pay rates are as low as $0.001 per action. Not worth looking for "an easy job".

That leaves with an option to run your own online business - having your own website is one thing, but customizing it to make it your own is another. Thousands of templates are available online, but they'll all be useless until you start posting your own content.

Affiliate marketing is the best way to start because it allows you to recommend someone else's products to web users and receive a commission every time a user purchases a product from the link you've provided.

There are techniques to learn, such as optimizing your website (means make it useful to users) and you need to work persistently. You don't have to be working part-time, but you'll have to put in a lot of effort. It's never "easy" - don't ever believe in "making money online easy", let alone the phrase "all you need is a few clicks"! 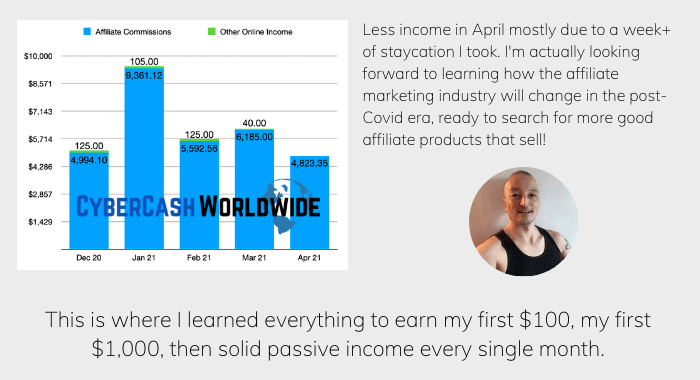 MoneyGuru Scam Review – How Much Can You Make?