Anyone could do what Smart Dollars Club is doing. But it's the last thing you would do as an affiliate. You'd go to hell if you did. I'll explain it in a little while. So Smart Dollars Club claims that you can make $300 with it on your first day - is it really possible? Of course not.

Surveys-for-cash schemes never pay decent money, and they shouldn't - defeat the purpose if they did. My Smart Dollars Club review will explain why you shouldn't sign up with any sites like this one. Not just to avoid wasting your precious time but to protect yourself from various spammers and scammers. Read on!

What Is Smart Dollars Club?

Smart Dollars Club is affiliated to Survey Voices (surveyvoices.com or paidamerican.com), which in turn is affiliated to several reward programs. Unless they're owned by the same people. We never know.

In other words, neither Smart Dollars Club nor Survey Voices has its own services to offer. Their job is to send you to as many third-party adverting sites, and they earn a small commission from them if you engage with them.

Here's how they trick you in;

These sites exist only for one purpose - to sell your personal data. So the 'survey' questions are there only to keep you interested for a short while. After several questions are asked, you'll then be asked to fill out your full personal detail. So that they can bombard you with spam emails, texts, telesales calls and junk mails in the post!

By the way Smart Dollars Club is primarily targeting victims in the USA. If you live outside the States, you'll be directed to a different survey-for cash site, such as Ipsos i-say, which is a legitimate research/reward program. 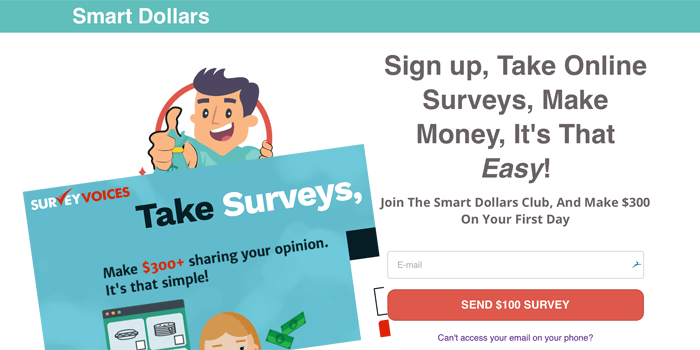 How Do We Know The Surveys Are Fake?

If you think about it for a second, you know which 'surveys' are fake. Surveys that are run by legitimate research companies;

It's important for a research company - or any company - not to collect personal data such as full name and address for data protection. Also such a data can bias the survey results.

And surveys are never designed to pay money to the respondents. Otherwise they would only attract people who are looking to make money by answering surveys. People who are on high income would less likely to participate. The results would be hugely biased, you see what I mean?

Research companies don't want the small number of the same people to come back over and over again to answer multiple surveys. For that reason, the reward for completing a survey should merely be a tip. The payout rates are usually somewhere between $0.20 - $1. Some might pay a little more, but never more than a couple of dollars.

Smart Dollars Club and Survey Voices are stinky spammers. As soon as I signed up, I started receiving emails not just from them but from a number of unknown senders.

Each and every single subject line is a typical spam clickbait, such as;

As you can see, they're all targeting get-rich-quick dreamers who still believe that such an unrealistic amount of money can pour out from nowhere just like that.

And if you dare to try any of those fake surveys, it will be never-ending. New tabs will continuously open and each one will invite you to a new survey for a large amount of cash or a prize draw. Each one is owned by a different spammer, so you'll be asked to fill out your personal detail over and over again. Needless to say, there will be no payments to you from any of these rogue spammers.

If you think, you have nothing to lose, you don't mind receiving unsolicited emails and telesales calls, so you might sign up and see if you can get something for free - don't bother, because not only will you be wasting your time but you will be exposing your identity to more serious scammers. You never know who's going to buy your data and who they're passing it on to. When they have your full detail, they might be able to buy an insurance policy or borrow a large amount of money in your name. You'd better watch out - if you're really tempted to sign up with a site like Smart Dollars Club and see what it's like, I suggest that you use a fake name and address.

What Does Smart Dollars Club Really Do?

Smart Dollars Club itself is just an affiliate. They aim to get you to sign up with third party spammers, and every time you sign up, they'll receive a small amount (no more than a couple of dollars each time).

Nothing's wrong with the method itself - affiliate marketing is a legitimate business model. What's wrong is that they're sending false information to potentially thousands of innocent users, exposing to unethical advertising agents. To put it simply - by lying.

That's what I meant at the very beginning of this review. Anyone could do this - no technical skill is required. Build a website with a CTA (call-to-action) button that says "Send $100 Survey!" and redirect them to a fake survey site upon signing up. It's easy. But decent affiliate marketers don't deceive users this way. Our job as an affiliate is to help others and recommend genuine, good products to solve their problems. 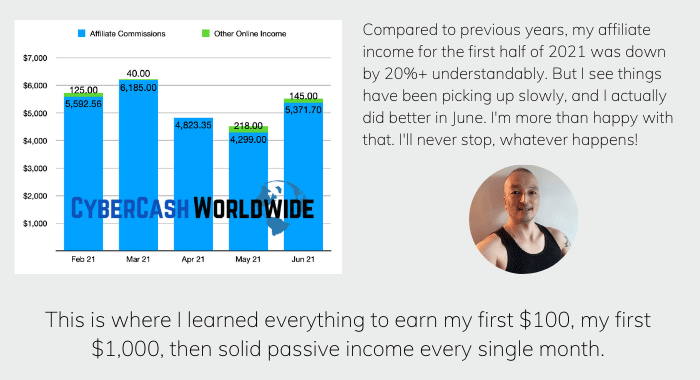 How To Podcasting For Beginners

How To Podcasting For Beginners