Simple Affiliate System Review – You Get What You Pay For

It claims to be the single secret method, but I don't think any part of it is "secret". Everyone knows this method. It also claims to give you a reliable, consistent income online, but I think this particular traffic method is anything but reliable, anything but consistent. But that doesn't mean it's all bad - I guess it all depends on how well you understand affiliate marketing and how committed you are to making your business successful in the long run. If you are low on budget, you'll have to be patient. But if you want quick results, you'll have to pay a lot. The golden rule applies to any digital marketing method, and this one is no exception.

What Is The Simple Affiliate System?

Simple Affiliate System (SAS) provides a basic done-for-you squeeze page, designed to promote a few specific affiliate products. All you do is insert your ClickBank ID in the box, connect it to your GetResponse account, and your page will be ready to use. You'll need to buy solo ad traffic to make it work.

Short video guides (approx. 30 minutes in total) will take you through the steps. You'll also learn how to promote your squeeze page in relevant Facebook groups, i.e. "free traffic method".

SAS is available for a one-time fee of $3, and you'll get access to the closed Facebook group for help and support. Who Is Simple Affiliate System For?

If you read the first paragraph of the above section (What is Simple Affiliate System?) and understand what it is, it's not for you because it's no different from the most standard "make money online" affiliate marketing method that's been around for years.

But if you have absolutely no idea - you've never heard of ClickBank or GetResponse, you'll gain some knowledge from this product for the price of $3, which isn't too bad.

Who Is The Creator?

The creator calls himself "Tim" but he never reveals his real identity. He's a real person and he sounds very friendly in the videos. The Facebook support group is co-owned by "Tim Ryan" and "Justin Mob" whose profile is completely blank. Both of them are hidden behind an avatar, so they're likely to be the same person.

Why he's having to go incognito, I don't know. Maybe he's not totally proud of the creation, or he's had a bad reputation in the past? But let's not speculate. All I can say is that the hidden identity makes everything he claims sound less credible, unfortunately.

Is Simple Affiliate System a Scam?

So no, it's not a scam. The sales page is pretty misleading and the creator is unknown. But apart from those, it's a legitimate method that's been used by millions (literally) of affiliate marketers and solo ad sellers over the past years.

The method itself has some advantages and disadvantages, so now I'll share my points of view.

GetResponse Is One Of The Best Autoresponders

GetResponse has been one of the best email marketing services at the cheapest range. Free up to 500 leads (=subscribers) and $15 per month up to 1,000 leads. It allows you to promote the wealth niche (make money online, work from home) while many other autoresponder companies prohibit it. The problem it had in the past was bad deliverability, which has been improved dramatically in the past couple of years. GetResponse has indeed earned great recognition among email marketers.

What I Don't Like About The Simple Affiliate System

I've said this like a hundred times and I'll say it again. Stay away from any system or tool that claims to be "all done for you" because you will have no control. You won't reap any long-term or short-term benefits from not having control.

Remember, everyone who purchased the same ready-made system is going to do exactly what they're told to do, and you're just one of them. You'll never learn, and you won't be making decent money that way, you see. Affiliate marketing is a business model, and you will be running a business. You can't leave any part of it "done for you" by someone else without knowing what you're doing.

Simple Affiliate System will provide you with 4 x landing page templates. But unfortunately, you can't customize any part of the page, which means you'll never learn how things actually work. If you want to succeed in the long run, you'll have to learn at some point in the future - from somewhere else. Especially, all 4 templates are typical lead capture pages that have been seen for many years and are no longer taken seriously by serious prospects. It may all seem handy, but handy doesn't mean good.

It Doesn't Teach You Email Marketing

GetResponse is good, and SAS will give you a chance to start generating leads. However, it won't tell you what to do afterwards. Nothing will work if you don't set up an autoresponder (i.e. send regular emails to your leads.)

I know for such a low cost at $3, I wouldn't expect it to teach you how to set it up or how to write email swipes. But if you are a complete beginner, you won't have the slightest idea of what you should be doing, so again, you'd have to learn it from elsewhere. I think it would have been better if SAS introduced at least an email marketing course as an upsell.

Use Of Solo Ad Traffic Without Link Tracker

Two solo ad traffic providers are recommended. I've never used either of the companies myself, but I have heard positive feedback about one of them from my fellow solo ad sellers. Both providers offer around $0.50 - $0.80 per click, which is standard.

On the other hand, neither provider's website includes some vital information such as;

Solo ad traffic is always hit or miss, and I can't stress enough how important to communicate with the vendor (before you purchase!) to make sure how friendly & helpful they are to you.

Even if they are helpful, you never know if the traffic they send to your site will be genuine or not. They may send bot traffic (not human visitors). They may say they've sent 100 visitors but in fact, they may have only sent 50. Using a link tracker tool is essential when buying a solo ad traffic service so that you can challenge them when their records differ from yours. Absolutely essential, in my opinion.

I appreciate that for the price of $3, Simple Affiliate System tells you to send solo ad traffic directly to your done-for-you page for simplicity. But that could waste a lot of your money.

The domain simpleaffiliatesystem.co was first registered in June 2021, and it already appears to be on the verge of being inactive.

This is a ClickBank product. So as usual, I received an access link from ClickBank as soon as my payment went through. But the link would only take you through to the "welcome video" page. The seller ("Tim") says I'd be receiving a link by email in a minute. I didn't. Nothing in my inbox, nor in my spam folder.

I sent an email to support with my order number. Nothing. I sent another one. 6 hours later, he said he couldn't find my detail. He found it eventually and, it was 12 hours before he managed to log me in.

SAS also encourages you to join the Facebook support group, which I did. It's a closed group, so you need to request to join and wait for approval. It's been 2 days and my request has been unnoticed by the admin. So SAS suggests a "free traffic method" for those who are low on budget, which is good. But the method is actually something that almost every self-proclaimed internet marketer has tried on Facebook for years & years.

The method is about joining as many relevant Facebook groups (e.g. affiliate marketing discussion groups, work-from-home marketplaces, etc.) and making yourself known. You engage with as many other members by posting your campaigns and replying to the other members’ posts. Hopefully, some members of the group will check your Facebook profile, click the CTA button on your profile and visit your landing page... Well, that’s the idea.

In my opinion, engaging with other entrepreneurs is okay. But you could end up consuming a lot of time because remember, social engagement is a two-way street. Especially in online marketing-related groups, there are a lot of others who want to promote their business to you as much as you want to promote yours to them. You see what I mean, you’ll be spending a lot of time dealing with them. And if you don’t listen to them, they won’t listen to you, either.

Your SAS landing page is too simple and outdated - it's a typical one that attracts non-responsive users ("do nothing and get rich for free" dreamers), so if you want to convince real prospects, I wouldn't recommend you to send users from the business-related Facebook groups, unfortunately.

Well, I almost claimed my money back, because they failing to deliver a digital product (i.e. login access to SAS) for 12 hours would be unacceptable. Eventually I got it, so that's ok. Simple Affiliate System is sold via ClickBank, so your purchase will be covered by its money-back guarantee. If you're not happy, you can access ClickBank's support from your email receipt and ask for a full refund.

The creator is unknown but he sounds so friendly in the video and his instruction is clear. (Not the video on the sales page though - that's just a voice actor reading a script.) Assuming his intention is genuine, I respect him for gathering up the basic information to give a rough idea to newbies.

Having said that, you'll only get what you pay for. There's a lot that's not covered such as how to get responsive leads from paid traffic services and when you get leads, how to send emails to them to promote your affiliate products further. I wouldn't recommend it to you if you would like to learn affiliate marketing seriously. You need to put in a lot more time and effort and this program won't be enough, unfortunately. 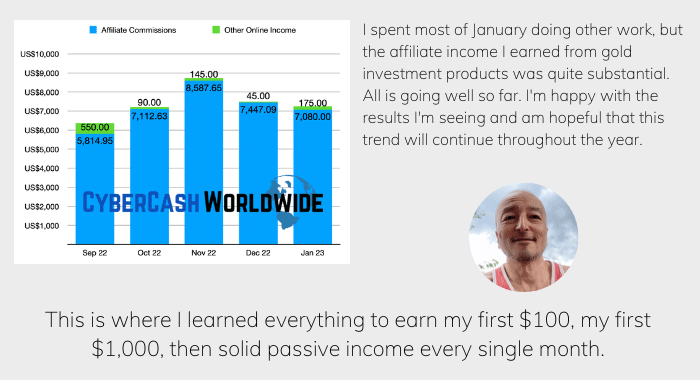