If you've been wondering if SantaCash is your savior for this Christmas, the answer is frankly, no. Not at all. 2020 has been such a horrible year, no doubt, and many of us may find this time particularly difficult due to the shortage of cash. An average American is said to spend as much as $1,000 on gifts, food, and decorations for the winter holidays ("Average Cost of American Holiday Spending" by Investropedia). It's not the kind of money a beginner can earn so easily online, but it may seem feasible to you from what SantaCash claims on its homepage. Well, don't believe any of it. My SantaCash review will explain how you could waste your time with this bogus scam site. In fact, not only will you waste your time but you'll also risk exposing your personal data to fraudsters.

SantaCash.co claims to let you earn $300 "today" by testing some mobile apps and taking some surveys. It falsely offers cash such as;

It also claims to "pay directly, so you'll see your money in your bank account within days."

None of this is true - SantaCash's only aim is to get you to fill out your personal detail (full name, email address, phone number, street address, date of birth, and so on) which will be sold to spammers. As a result, you'll soon start to receive spam emails, fake promotional text messages from companies that you've never heard of, and strange cold-calls.

And of course, you're not getting paid a single cent by SantaCash. If you have only started to look for ways to make money online recently, you might want to remember that there's no such site or company that pays you rewards at such high rates for completing such easy tasks anywhere on the internet. If you see one, you'd better assume that it's a scam. 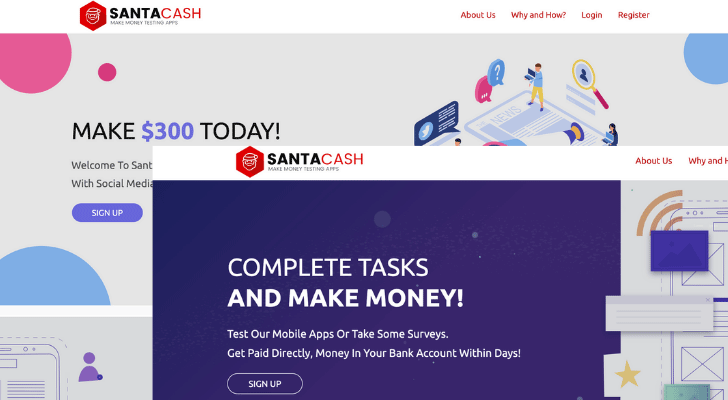 So each time you complete a task, you'll see the amount added to your account in your SantaCash dashboard. This might certainly motivate you to do some more tasks. The minimum "withdrawal" threshold is $250, so you might try your best to answer as many of these (fake) surveys, install apps, and refer others to SantaCash.

What happens is that, when you send a withdrawal request, the admin will respond to say that your activities on SantaCash are against its terms. They'll say that they've found some unauthentic stats therefore your payment withdrawal request will be disapproved and your account will be canceled. Soon your access to SantaCash will be blocked, and that'll be the end of it.

How Do I Know This?

I know this because there have been numerous similar/almost identical sites to SantaCash, and they've all used the same approach to deceive the users. They keep copying the same sites, change the name, images, and a few descriptions and publish multiple different sites with the same deceptive content. They often forget to change the name here & there, and I can see one that's missed out in the "Cashout Requirements" section - this proves that SantaCash.co is just another rehashed version of the previous scam site, Viral Dollars.

What Are They Doing This For?

So why is SantaCash (as well as all the other fake task sites) offering you so much money just for answering surveys and referring friends, but not actually paying?

The simple answer is because they're not making much money from this. SantaCash is an affiliate to spam marketing agents who advertise fake surveys and "install an app" campaigns. Each time you take one of those surveys or install an app, you are required to fill out your full personal detail in the form, so that they can bombard you with spam later on. And each time you complete one of the tasks, SantaCash will receive a small affiliate commission (typically $1 - $1.50) from the agent.

You see, for SantaCash to make decent money, they need to get as many people to sign up and complete the tasks. The method they chose to take is to simply lie to users; we'll pay you $30 just for answering a survey. We'll pay you $10 if you invite someone else to join in. We'll pay you $50 if you tell YouTube viewers that SantaCash is legit.

When Tasks Are Not Tasks

SantaCash says "everyone should get what their opinion is worth online", as if they are looking to pay users for helping companies improve their products... Well, that's what a real survey-for-cash is all about. But when you actually go into the SantaCash's task wall, all you see is invitations such as;

It doesn't say anything about surveys. Some of the "tasks" will ask you a few questions but they're all too broad and silly, such as "do you like shopping?" "how many times do you shop a week?" You can tell these surveys are fake because real survey questions should always be much more in-depth. No research company would want to ask some random people whether they "like shopping" or not, without asking the number of family members, household income, etc.

Other fake tasks include;

Installing a Flash player via a third-party site is not even a task - many scam sites falsely advertise Flash but they in fact send malware instead. You'd better be careful about that. If you really need a Flash player, I suggest that you always download it from the Adobe site, not from some unknown site to avoid any security risk!

In the "How and Why It Works" page (https://santacash.co/why-it-works), SantaCash claims to have "worked for over 13 years developing an AI-based algorithm" and the tasks that it offers are generated by AI. Unfortunately as I explained earlier, the "tasks" - fake surveys - are run by third-party agents. You'll see that as soon as you click to begin a task, you'll be directed to a third-party site. SantaCash itself has absolutely nothing to do with artificial intelligence.

In fact, what's being said on this page barely makes sense. It says that it pays "$30 per task to 185,000+ happy members", but it never explains how so much money is funded... (Well, of course it cannot explain anything because there's no funding source!)

And SantaCash.co has not been around for 13 years as it claims - the WHOIS information can reveal that the website domain was only purchased in April 2019, and the site has only been around since April 2020. 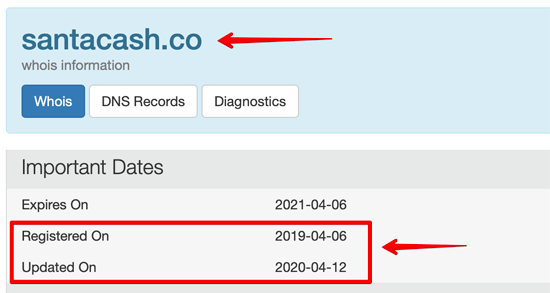 The homepage says that it's run by a company, SantaCash, LLC, and its "headquarters" is located at 420 Lexington Ave, New York, NY 10170, but what I've found is that a virtual office is offered for rental at this address. Likewise, SantaCash's "terms of service" page shows a customer service address which is P.O. Box 71918, Manhattan Beach, CA 90267. As you can see, if the headquarters was in one state, there's no reason why the customer service's PO box should be in another state. All the fake information proves that there is no such company - it's all made up.

If you really want to earn some money by taking surveys, you can find some legitimate survey-for-cash sites. But do you know they typically only pay $0.10 - $0.50 per survey, and often you end up spending half an hour just to find a survey that's available to you? If you google, you can find many survey-for-cash comparison reviews, and they say some sites are better than others... but those survey sites are all more or less the same. Completing a survey is a lot more time-consuming than you think and you'll be lucky if you can earn a few dollars per day, after spending so many hours.

After all, survey-for-cash sites are not designed to let you make money, they're designed for research purposes, you see. They don't want the same people to participate over & over again and give random answers just to make money.

Whereas sites like SantaCash that offer unusually high returns are most definitely scams. $30 just for answering easy surveys - it may sound like a fantastic "job" to you at first, but who's going to pay for it? If you think about it from a company's point of view, you'll know that none of this makes sense. Like I just said, companies run surveys for a research purpose, right? Imagine you are a company and you want to do some research. Would you pay $30+ AND offer a gift like a $500 prepaid card, Xbox, and a brand new smartphone to every single person who answers your survey question? There you go, that would be far too good to be true for those random participants, and ridiculously a bad deal for you as the company, you see.

So to sum up, if you're looking to make decent money online, never look for "GPT (get paid to)" sites that offer surveys-for-cash because;

You cannot find any website that lets you start working on something that anybody can do and magically pays you decent money. If there's a website (or "system" or "program") that claims so, it's likely to be a scam. You are most likely to be required to make a payment first, but you won't see a good return on investment.

The only compelling way to make money online is to run your own business, and the online business industry is pretty competitive. So you want to remember that if you're not willing to learn the knowledge and skill, you won't make it. Affiliate marketing is a legitimate business model that lets anyone start easily with a small initial investment - it doesn't mean you can earn money easily though. If you're seriously looking to learn the techniques, join me from the link below for free. Any questions, don't hesitate to ask by leaving a comment below. Good luck! 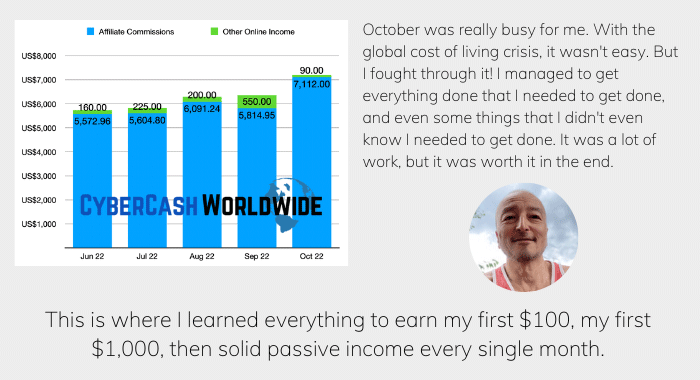