Want To Retire Early? Then You Should Consider These Online Careers

The majority of Americans expect to retire at the age of 66. While this age is considered ‘the normal’ retirement age, it’s by no means set in stone. By working hard to build a successful and lucrative online business now, you can save all the cash you need to retire long before you hit 66. But what careers should you consider to make as much money online as possible? 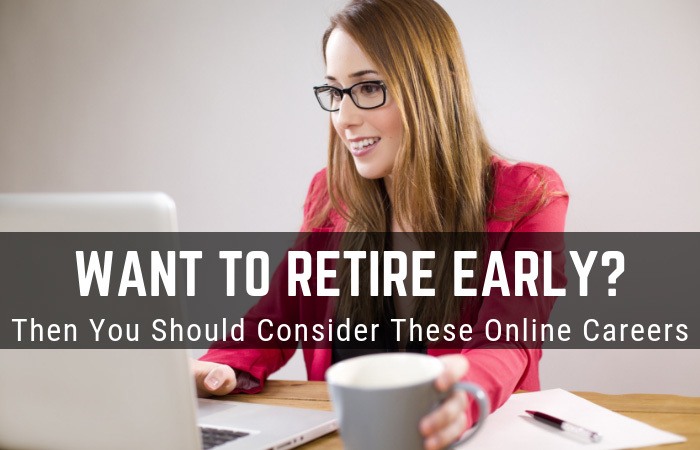 96% of U.S. citizens shop online. So, it’s easy to see why e-commerce is growing year-on-year in America. It’s also one of the easiest ways to turn over a profit and ultimately retire early. 33-year-old Trevor Chapman is one online entrepreneur who has demonstrated how easy it is to make a fortune from buying and selling. He launched his e-commerce business with just $200. He then sourced low-cost goods from China which he could sell for a significant profit, and in just six months of selling he turned over $2 million. And you can replicate this success and some by adding affiliate marketing to your e-commerce site to earn an additional income in preparation for early retirement.

When it comes to preparing for your retirement, experts recommend having between $1 million and $1.5 million saved. But, if you’re going to retire early, you’re going to need to adjust your savings to cover your additional work-free years. One way to do this is to become a blogger. Every day, two million blog posts are published worldwide. And, there’s a good reason for this as bloggers who are smart with their site can earn millions every year. Bloggers who utilize affiliate marketing tend to be the most successful as they literally make money while they sleep. Huffington Post creator, Arriana Huffington, is one of the most successful bloggers out there. Just six years after her blog’s launch, Huffington sold her blog for $315 million, which is more than enough to retire early with.

Perhaps you're a social media guru who knows the top secrets for increasing a site’s traffic or maybe you’re an expert at organizing your family’s finances. Whatever your expertise is in, there’s a market for it. By creating an online course for people to buy, you could rake in thousands and set yourself up for early retirement. The likes of Melyssa Griffin made $258,108 in December 2016 on e-courses, while Kristen Larsen made $100,282 through similar courses in April 2018. And, of course, adding affiliate marketing links to your web page will always bring you in a little extra each month, too.

Retiring early is achievable when you choose to follow an online career path which promises to make you cash. By combining this career with affiliate marketing, you’ll be making a significant sum of cash every month, which will allow you to retire in no time.

Be Proud Of Who You Are

Be Proud Of Who You Are