Club Cash Fund is a Pyramid scheme. My advice to you is simple - don't get involved. Is it a scam? It's a criminal activity. It's illegal. The man who's running it (I shan't name here) will be busted by the authority sooner or later.

The man behind it may be trying to run the scheme carefully, but the members are not. There's no direct access to Club Cash Fund. You can only join when you're referred to by someone via their referral link. But the members openly place their link on social media and YouTube and say "This is great, you get free money! Join me!"

And this scheme is only open in the USA. I live in the UK and have been invited to join by an email spammer. The spammer should have known each subscriber's country of residence from their IP address on his AWeber list (unless he had bought the list from someone else). It seems that he invited everyone on his list.

How Can You Tell It's Illegal? 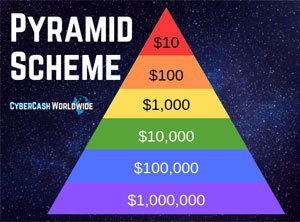 The objective of a pyramid scheme is to raise money - the members recruit people for nothing in the name of money. Whereas with an MLM (multi-level marketing), the goal is to sell the product or service, and the referring commission plan is just an extra. You see the clear difference in between the two?

A pyramid scheme is illegal in many countries including the US because it can get people in debt "for nothing".

How Can You Spot A Pyramid Scheme?

Unfortunately, some people who claim to "make money online for living" get so carried away by the fact that the scheme is making money, they tend to forget what they're selling.

It's easy for you to spot it if you never forget the one ultimate question;

"What am I receiving in return right now?"

In any scheme, system, or a trading relationship, if you pay $100, you should be receiving something equivalent to $100, right? Is it a web tool? Training? Ebooks? A cleaning service? What is it?

If someone starts to talk about how much you can make with a particular system "If you refer 10 people, then you'll receive $200 instantly! On top of that, every time your referral refers someone else, you'll receive......" Get the question out - forget the payment structure and tell me, what am I receiving in return right now?

Club Cash Fund requires you to pay $100 at the beginning. Ask the same question again. You're not receiving anything in exchange for your payment.

Their right answer should be, "You're not receiving anything right now, because it's an investment scheme. You'll receive money only when you've recruited someone." That's the real answer, and that's what's against the law.

So you know the scheme itself is bad enough. But what's so "dodgy" is that this man is only accepting a check from you. A bank check! It means that he's operating almost everything manually. When he receives a check, he will actually type in the system "$100 - from Mr. A. - today's date".

We never know, the system he's got might be a little more sophisticated than that, but basically that's what he's doing. If you joined this club (don't join!) and successfully recruited a few people, how would you know you're receiving your share of money correctly?

Of course, he has to hide all this from the tax authority. He might deposit your check into his bank account together with several other people's checks at the same time in order to mask the transactions. "$800 deposit - antique table sold to a friend."

A pyramid scheme doesn't have a product/service to promote, so it can only promote the system itself. It has to make up something that appears to be its own unique system to create a buzz.

In Club Cash Fund's case, it's the "rotator". When you first pay $100, you'll be on the top of the rotator of the system, and your sponsor will be located at the 2nd of the rotator, and so on.

So what is the rotator? Nothing. It's totally irrelevant to anything.

It's there to distract existing members and potential referrals. We can see some YouTubers enthusiastically talk about this system - "When you first join, you'll be on TOP of the rotator. When you refer someone, you'll be shifted to the 2nd position..." So what is the rotator??? In short, it's a pyramid scheme!

If you're about to be talked into a scheme like that and got confused - not just Club Cash Fund, but with any scheme, you can ask the same question again to them and to yourself again. Am I receiving the "rotator" in exchange for my $100 payment? Is the rotator a product? It's not, then what am I receiving in return?

Only Recommend Products That You Believe In

No matter how much they offer, don't get involved with any schemes that don't offer products/services that appeal to you.

If a scheme doesn't sell anything then it's a pyramid or Ponzi scheme - not only because it's illegal, but it can get you to harm others. Because by referring someone to the scheme, that person will become your "victim".

Even if they do offer a product or service, if you don't like it and believe in it, what's the point in recommending it to others - lying, essentially - just for money?

If you're desperate, you may be tempted to promote any products randomly. But that will very unlikely to work, because the audience at large will know that you're pretending. You might make some money if you're extremely lucky, but that'll be temporary. It's not sustainable and you will not enjoy it in the long run.

10 Tips On How To Spot Online Scam

10 Tips On How To Spot Online Scam