Clout Bonus is a mirror site of Tap2Cash, both of which have recently been created to scam users for the sole purpose of selling their personal data to illegitimate advertising agents for money. There have been countless similar websites in the past, possibly created by the same syndicate of scammers. So today, I hope my Clout Bonus review will help you avoid getting caught up by such a ridiculous trap and wasting your precious time regretting it. Everything about it really, is fake.

What Is Clout Bonus?

Clout Bonus claims to pay easy money to users for barely doing anything. It appears to offer;

As you can see from the slogan on the homepage - "Make $500 Today" - it is possible to "make" that much of money only within your Clout Bonus account. But it's not real money, because as for the payments - they never pay. They've never paid a cent to any members in the past, and they never will. Your withdrawal requests will be simply ignored and that's the end of it. No point trying to take any further actions (e.g. sending complaints via social media) because all they do is to block your access and eventually disappear.

Clout Bonus exists to steal users' personal data by using phishing script, and also to receive commissions for selling the data to third parties via its "Task Wall".

All the "tasks" are fake surveys-for-prize, run by illegitimate advertising agents. They require users to fill out their personal information such as email address, phone number, and street address in the name of a survey so that they can start sending spam messages. 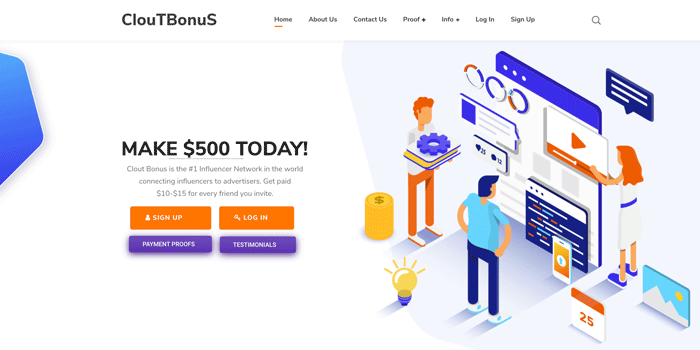 Who Are The Clout Bonus's Target Victims?

The catchphrase is "we are the #1 influencer network" - primarily trying to draw the attention of new teenage influencer-wannabe's. Convinced by the fake testimonials by fake influencers, the victims are initially excited to join the club where million-bucks opportunities are.

And once they join, it turns out that their job as an "influencer" is to share their link on social media here & there. Lucky ones will soon find out something may be wrong, but others won't realize until they hear no response to their cash withdrawal request that they've actually been fooled.

When you sign up and log in for the first time, you see that $25 has already been added to your account. Say, you complete 2 easy tasks and $60 will be added (2 x $30). Within the first 10 minutes, your account balance will be $85. So it is possible for anyone to sign up and "make" $500 in one day - only within your Clout Bonus account. But like explained earlier, you'll never be able to cash it. It's just like playing a free game app, the money's not real.

Upon logging in for the first time, Clout Bonus will ask you to set a preferred payment method (how you want them to pay you) and ask you to fill out the detail. PayPal email address, Cashtag, Bitcoin Wallet or your street address if you want them to send a check.

Again, you'll never get paid a penny, and the information that you save here is likely to be sold to third parties and used for malicious purposes. So if you've already entered your address here, you'd better log back in now and delete it.

If you watch the video "testimonials", you know they're not really testimonials. At the time of writing this review, I can find a couple of videos created by existing users, but neither of them says they've physically got paid. They are two of the victims who still believe that they'll get paid. And they would have simply created a video for the $50 reward, which can never be cashed out.

CloutBonus claims that it started in 2015 in Amsterdam and it's paid over $25 million to over 65,000 members. It also claims that it's partnered with more than 300 companies. It goes on to say, it was invited to over 30 "advertisement summits" in 2018 and won awards for the high paying offers.

None of it is true because the site was only registered in November 2019 and went on live the following month.

Every company spends money for valid reasons. Winning an award for offering something of a high value doesn't make sense. Clout Bonus never provides an explanation as to what the income resources are. It's not making any money apart from a small commission for selling users' personal data (no more than a few dollars per each individual's data). So there really is no incentive for rebates in any form - Clout Bonus doesn't have any money to pay!

The photo of your Clout Bonus "Account Manager" is fake - you can find the same photo across multiple websites including LinkedIn. Online presences, in general, have never been totally transparent and especially you can have decent conversations with robots nowadays. Fake profiles like that may no longer matter to you much. But at least you know the person behind Clout Bonus is not a glamorous young girl, it may be a fat, bald man with no teeth whose sole purpose is to make a few dollars by selling innocent people's personal data to spammers.

The executive team doesn't exist, either. They're all stock photos, used by many other websites, repeatedly appearing as a fake manager, fake producer, fake consultant, etc

As I was browsing the homepage, my antivirus software alerted me with a phishing scam warning message. It means the scammer is "fishing" for your personal information to commit serious identity theft. Such as to access to your bank account and fraudulently use your credit card and get you into debt. I've seen the same warning message on a very similar scamming site, Clout Bucks, most likely to be owned by the same scammer. This time the warning message seems to pop up on me intermittently, but this on its own should be a single reason we should all stay away from Clout Bonus.

On any online job websites, what they call a "tasks" should be something meaningful. A task is created for you to carry out because a company or an individual needs help. It can be data entry, researching, writing, translation, etc. You should be getting paid adequately. A data entry job can pay as much as $15 per hour, but you'll be seriously working on thousands of lines worth of data.

The "tasks" that appear in Clout Bonus are obviously fake because none of them is barely a task. "Do you want a brand new Samsung Galaxy?" Answer Yes or No... That's not a task. They are fake prize competitions in disguise and, there actually is NO prize.

The items listed in the Task Wall are all relatively high-value, such as

When you actually click any of them, a totally irrelevant (fake) prize draw popup may come up, something like this.

You know, these fake "tasks" are designed to appeal to freebie chasers who have no intention of learning or whatsoever. There is no car to win, either. Nothing to win in the first place. But freebie chasers will keep giving out their email addresses regardless, and their inbox will end up being bombarded by spams.

If you stop and ask yourself, why would anyone give out an expensive car so randomly? Then it should make sense to you. If such a prize competition was real, it should be part of a promotional campaign. There should be a sponsor - the car manufacturer, in this case - and the sponsor should receive a benefit from the advertising campaign. Nobody would waste such a large amount of money (i.e. a car worth $150k) just to collect random email addresses.

Tap2Cash (tap2cash.net) is a site that's almost identical to CloutBonus, which means it's most likely to be owned by the same scammer. If you have come across this site, everything that's written here applies - the false promise of payments, fake account managers, testimonials, payment proofs... Don't believe anything that's being said on that site.

If you still believe that there may be a way to make money online so easy - just by randomly sharing a link, or entering some odd prize competitions - you'd better stop now. You don't want to waste any more time of your previous life chasing something that never exits. Nobody's a charity, unless they are a registered charity group, in which case they won't pay some random people online like you & me for no reason, you know that.

Yes, there are many legitimate surveys-for-cash sites, but they barely pay. (Can You Make Money With Online Surveys? [1/20th of the Minimum Wage]). If you really want to start making a living online, then the only way is to seriously work for it.

Affiliate marketing allows you to start with low investment - you have to have your website and promote products/services to receive commissions from the manufacturer or the service provider. It's good because the option is open to anyone, as you don't have to create anything your own, but your job is to recommend someone else's on their behalf for financial rewards.

If you're interested, join me from the link below - you'll have to be serious enough to learn the techniques, but if you're determined, you can do it. Any questions, ask me by leaving a comment below! 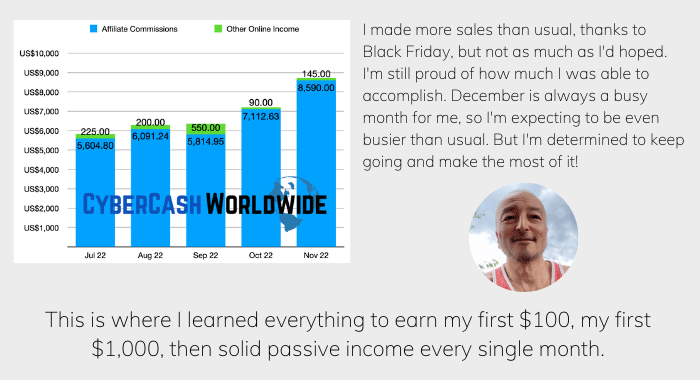