CashJunky Scam Review – Don’t Believe Any Of It!

If you've been wondering how likely you'll get paid by CashJunky.co and decided to check the legitimacy of the site, you're in the right place. Because I can tell you right away that Cash Junky is a scam - you'll never receive any money from it. If you don't want to be harassed by unsolicited emails and nuisance calls, you really don't want to put a foot in it. My CashJunky review will explain how this works, and also what you should be doing instead if you are looking to make money online.

CashJunky works for fake advertising agencies as an affiliate, sending your personal detail to them for a commission. Firstly, it tries to get you to sign up by falsely offering a "sign up cash bonus" of $50. Once you've logged onto CashJunky.co site, it tells you to complete as many tasks in the Task Wall, again falsely offering to pay $50 for each task. To complete a task, you'll have to fill out your personal detail - full name, email address, street address, phone number, date of birth, and so on - all of which will be sold to fake advertisers. Sooner or later, you'll start being bombarded with spam emails, unsolicited texts, and cold-calls.

As for the payment - you'll never receive a penny. You can get your CashJunky account balance increase pretty quickly because a high rate of reward is offered for doing some other disproportionately easy tasks, such as;

The tagline of CashJunky is "Get paid to download apps ($50 each!)" but I actually can't find any links to apps anywhere under the Task Offer Wall or anywhere in the dashboard. Again, that's another "too good to be true" fake offer.

The catch is, when you request to withdraw cash, you'll receive a message from the "admin" that says your transaction turns out to be unauthentic, therefore you won't be paid and your entire CashJunky account will be canceled. Your access to CashJunky will be blocked shortly after that, and that'll be the end of it. You'll never get paid but all you'll get is never-ending nuisance advertising messages. In short, CashJunky is a data-harvesting scam. You should stay away from it. 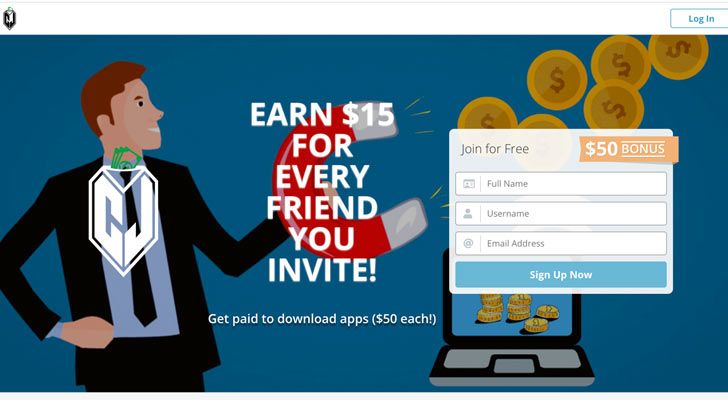 Well, pretty much everything that's written or displayed on the CashJunky is untrue. CashJunky works as an affiliate - to get new users to sign up with companies for a commission - affiliate marketing itself is a legitimate business model. But they're trying to pocket as much money for themselves by deceiving users. Needless to say, falsely offering to pay cash to users for doing ridiculously easy "tasks" has nothing but malicious intent.

When you go to the "Task Wall" page, you'll be immediately distracted by shiny objects - free gift card offers, free new smartphone, free game console, etc... As if you'll receive a choice of your gift as well as $50 cash just for completing a task. But as you click to proceed, you'll notice there's nothing a job's worth. All you do is answer some silly questions such as "How many times do you shop a week?"

Many of these fake tasks are run by the "National Consumer Center". This site is notorious for offering fake prize gifts in exchange for your full personal detail. (If you google the reviews, you can easily find how this site sends deceptive messages to thousands of users.)

They use fake "free gifts" as the bait just to get you to submit your sensitive, personal data and, as I explained earlier, they'll sell the collected data to other illegitimate advertising agencies. The gifts never exist in the first place, you'll never receive any of them!

CashJunky claims to be the "web's most popular rewards program" but if you search the name on social media, you'll know clearly it's not the case. Legitimate reward programs have a lot more information on the site - how it is established, the company's mission, how each task will help users, how it's supposed to help the company that's offering the task. No clear explanation is found anywhere on CashJunky's homepage.

In the "About Us" page, it says the headquarter is in California and "CashJunky is a subsidiary brand of CashJunky. PTY" Whereas in the "Terms of Use" page, the company is in Melbourne, Australia. But there's no further information or link to the company's site (because there's no such company!)

Well, if it was a large enough company capable of handling millions of dollars worth of payouts to some random users, it would be more transparent. Such as its corporate governance (i.e. how it helps society), and the list of directors and key employees. None of it is mentioned on the site, which means really, no such company exists.

Two testimonials are displayed on CashJunky's homepage, but both are proven to be fake and their photos are just screenshots taken from their Twitter profiles. One of them is Bandman Kevo, but the words are obviously made up - He's a real influencer, if you check his YouTube channel, you'll find him warn you not to believe scam sites like CashJunky. The other testimonial by "Tiffany Banks" is also fake. A screenshot of someone's Twitter profile is used unauthorized.

If a testimonial was real, there would be at least a little more information about the contributor. But these CashJunky testimonials don't even have a link to the contributor's social page, while the site claims to be the "#1 influencer network".

One of your "tasks" is to sign up for Amazon Prime 30-day free trials. When you click the link, you'll be directed to the Amazon Prime video page. If you sign up for the free trial, the owner of CashJunky will receive approx. $3 from Amazon as an affiliate commission. However, the site is offering incentives (falsely promising to pay you cash if you sign up with Amazon), which violates Amazon Associates' operational agreement. This is none of my business nor yours, but sooner or later, CashJunky's affiliate status will be revoked by Amazon.

Okay, this is the most important part. Like I just said, the CashJunky site is full of false claims, but all these claims are focused on "payments", such as;

Also, the "payment proof" display (the screenshots that are falsely created using graphic software) simply tries to tell you that "it pays".

You may notice as you browse through CashJunky.co that it barely explains anything else - how the business works as a whole. You see, if this site was able to pay a user $50 for doing a silly "task" each time, you would question the system behind it, for example;

Of course, there's no answer to any of these questions, because the whole site is totally fabricated!

You know by now that CashJunky is a scam. You'll only be wasting your time helping them make money and you won't be receiving a single dime for whatever you do. So the next question may be, which sites pay?

Well, nobody. There are some "reputable" reward programs and survey-for-cash sites such as Swagbucks and Clixsense, but they all pay as little as a few cents per task. After all, nobody pays you decent money for a job that anybody can do. They won't pay you more than a few cents for an easy job because they don't need you - there are plenty of others who are happy to get paid a few cents!

So if you see a sale copy such as;

NEVER believe it, because it's most likely to be a scam.

Run Your Own Online Business

The only way to make a living online is to run your own business. Affiliate marketing is one that you can start today with no or very little initial investment. Again, you can start easy but you'll have to put in as much effort to make it a successful one. If you're looking to make a passive income by affiliate marketing, join me from the link below. See if this is a long-term career that you can/want to pursue. Cash Sniper Review – It’s OK but not for YOU!

Cash Sniper Review – It’s OK but not for YOU!