CashCrates.co Scam Review – Nothing But Harm!

Today, my CashCrates.co review will explain how this counterfeit site will trick you into the silly game, and I hope this post will help you understand what it is to make real money online. CashCrates.co is a data harvesting scam site. Not to be confused with CashCrate.com, which has its own history but now just a reward program review site. Cash Crates with an "s" in the end is run by a serial scammer, whose intention is to sell your personal data for money. You will not get paid a dime by this site. Read on.

CashCrates.co is a data harvesting scam. It encourages you to complete tasks by falsely offering a large amount of money and gift prizes. The main "tasks" are fake surveys, requiring you to submit your personal information (full name, email address, street address, phone number, and so on), which will be sold to spammers.

Cash Crates claims to offer a lot of money only to attract new users. $50 just for signing up, $50 for answering a survey, $10-30 for sharing a link on social media and get your friend/follower to join each time. What they do is simply not pay. When you become eligible to withdraw whatever you've "earned", you send a withdrawal request as instructed. You won't hear a response. If you email the "support", they might come back to you with an excuse and ask you to wait for X days/weeks. Then your access to Cash Crates will suddenly be blocked. That'll be the end of it.

Meanwhile, your personal information has been passed to third parties, which means sooner or later, you'll start receiving unsolicited emails, texts, and cold-calls. 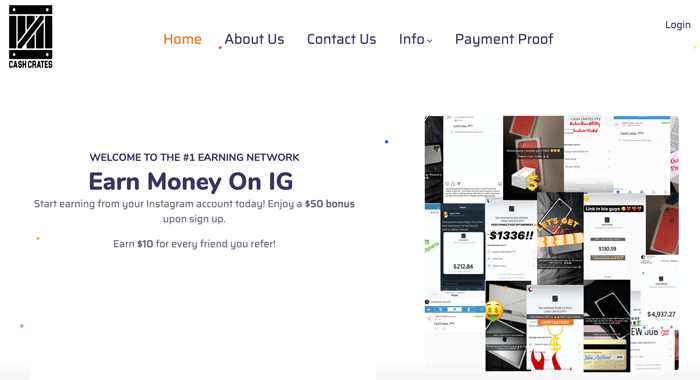 How Do We Know Cash Crates Never Pays?

Because the same scammer has copied the same site numerous times in the past, added a new name, replaced the logo and published it with a different URL. JustEarn.co, CashForShare.co, OGDollars.co, Paid2Share.co, CreateBucks.co, to name a few. Number of users have already complained about these sites across social media. This proves that CashCrates.co is just another site, created by the same scammer. 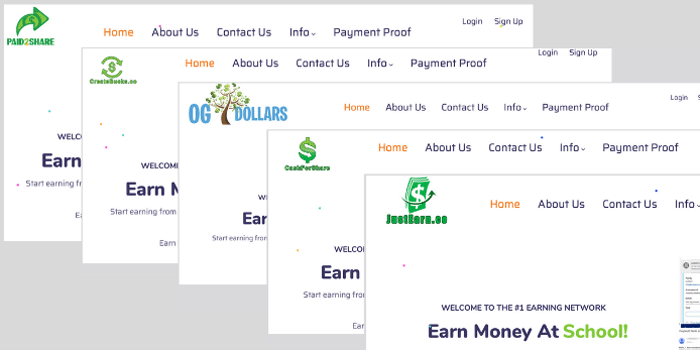 Testimonials, Proof of Payments... All Fake

The people who appear on the "testimonial" section and the "influencers" are all fake. The scammer uses these people's photos unauthorized, and also downloads some stock photos and pretends that they are the real users. These photos are reused on all other scam sites mentioned earlier.

Needless to say, proof of payments are all fake. You know that anybody can create screenshots like those using graphic software easily.

CashCrates' "About Us" page says it's based in South London, but it never tells you the address. However, in its terms & conditions (which don't really exist!) page that the site is owned by "Cash Crates PTY, Melbourne, Australia". Again, the name cannot be found in the Australian company registry database.

It says it primarily works with influencers on social media including Facebook and Instagram, but the link from the social media icons at the bottom of the page is broken.

The "About Us" page also says it first started in 2015 ("partnered up with a series of small businesses"), but I can tell you the website was only created in April 2020 - you see it's brand new. Basically it's entirely a bogus company, everything that it tells you is falsely made up. 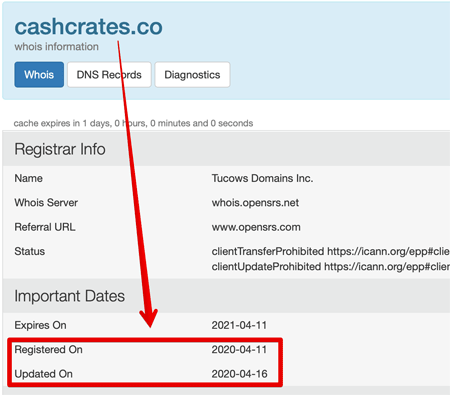 CashCrates.co will NOT pay a cent to you simply because it's not earning enough money. The revenue that Cash Crates generates from selling personal data is relatively small. Those spam agents usually don't pay more than $2 a data, which means it is impossible for Cash Crates to pay each users $10-50 each time they sign up or complete a simple task!

It Pretends To Be Legit With The Word "Fraud"

CashCrates sets out its fake "fraud policy" and displays it on one of the pages, prohibits certain actions such as;

It only does this so CashCrates will appear to be a legitimate business. Basically by saying to you "don't cheat", it tries to mask the fact that is the one that's cheating.

Inexperienced internet users may fall for the dirty trick because of the site names; as if to say "As a fraud/scam watchdog body, we can confirm that Cash Crates is legit." It's all fabricated.

It also offers to pay you $25 each time you visit one of the sites, stay at least 5 minutes and leave a comment. If you do, $25 will be added to your CashCrates.co account, but again you'll never be able to cash it out.

As I mentioned earlier, "$50 Task Wall" is where those illegitimate advertising agents steal your data and sold it to third parties for money. Each task is titled such as;

As if you'll automatically receive a gift (as well as cash from Cash Crates) upon completion of each task. If it sounds too good to be true to you, of course it does, and it is.

When you click one, you'll be directed to a spam site, displaying a bogus offer and asked silly questions such as "how many times do you shop a week?" They pretend to be a survey-for-rewards service but they're not. They're not even prize competitions. They just flash a value item as a bait to get you to send your full personal detail. You will NOT receive anything in return - all you will start receiving is spam emails, marketing text messages, etc.

So Which One Is Legit?

You might say, okay, I understand CashCrates.co is a scam. So tell me which one will pay me the most...

The answer is "none"! There is no easy job that pays a good rate of money online. Seriously, think about it. There are two reasons for this;

The ONLY Way Is To Run Your Own Business

If running your own business sounds like something impossible to do, it's really not. Start affiliate marketing - it's a legitimate business model where you recommend products to others and you will earn commissions on sales. You don't "sell" products - you recommend them, just like you recommend stuff to your social followers. Many teenage kids start to learn the technique, and affiliate marketing certainly does not require qualifications; college dropouts can make a full-time income from it.

If you are interested in building your own website and making money from blogging, join me from the link below - this is where I learned to make $6,000+ per month online.

Any question, leave a comment below. Will get back to you within 24 hours. Good luck!