AltasCash is another data harvesting scam site. There have been many similar sites with the same layout over the past years, so if you've seen one or tried one before, you'll know it's a scam just by looking at it. But for those who wonder if it really lets you make $300 per day with social media as it claims, my AltasCash review will reveal it all. In short, you'll never get a single cent out of it, and you'll risk exposing your personal data to fraudsters and hackers if you keep using it.

AltasCash.co is affiliated with spam advertising agencies. It falsely offers relatively high-value prizes such as $100-$1,000 gift cards, brand new smartphones, and game consoles for answering fake survey questions. It tells you that you'll only be "qualified" for these prizes if you submit your full personal detail - full name, email address, street address, phone number, date of birth, etc. The prizes are all fake, so you'll never receive anything no matter how many times you submit your detail. Your detail will be sold to multiple illegal advertisers, therefore what you'll start to receive instead are spam emails, cold-calls, and unsolicited text messages.

AltasCash's aim is to sell as many users' personal details, so it falsely offers to pay cash such as; 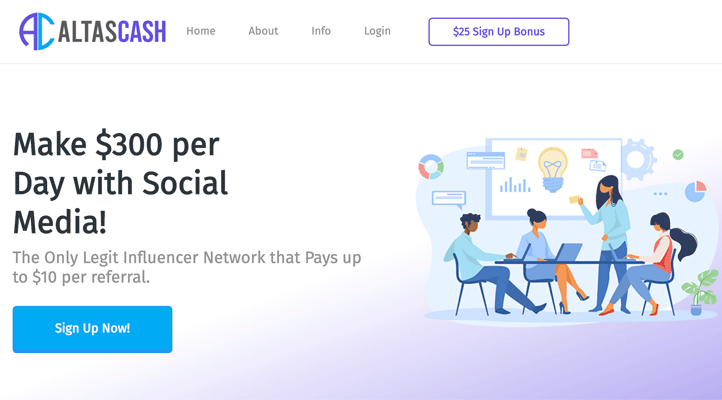 AltasCash says it will pay you cash via PayPal, CashApp, Bitcoin, or by check, which is totally a false claim. You will never actually receive any money from AltasCash, not even a cent, but instead, your access to AltasCash will soon be blocked.

In short, AltasCash will not only waste your time and embarrass you on social media, but it will put your personal security at risk by selling your detail to spammers and hackers.

But Some People Say They're "Getting Paid"...?

Yes, those people are either speaking too soon or telling you that they got paid just to invite you in so that they can get an extra $10 to their account.

They may be speaking too soon because they're only looking at their AltasCash account balance, thinking that the money is already theirs.

The reward in "dollars" will indeed be added to your AltasCash account each time you do one of the tasks. If you're excited by this and think that you're quickly making "easy money", wait and see when you send a withdrawal request... First, you'll receive an email from the admin asking you to wait for X days/weeks while processing your request. Then you'll receive another email to say that they've found some suspicious activities in your account, therefore you're not entitled to receiving any payments, and your AltasCash account will be canceled with immediate effect. You will no longer be able to access using the same ID and password, and that'll be the end of it. 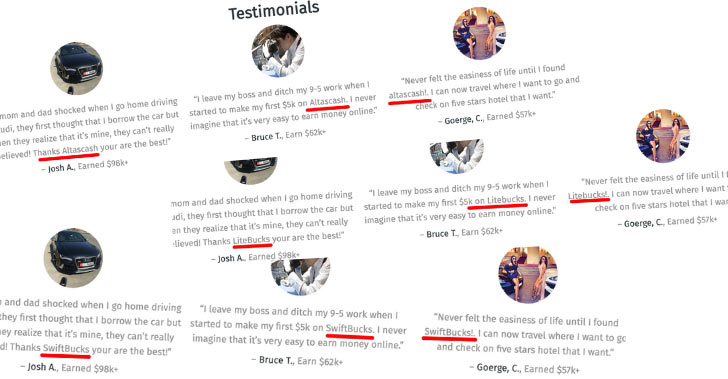 The same "testimonials" that read "I got a car, thanks to AltasCash" and "I quit my 9-5 job when I started to make my first $5 with AltasCash!" have been used for multiple sites by the same scammer including LiteBucks and SwiftBucks as you can see. Those sites have all been created to sell the users' personal data and never pay any money. When a lot of the users start to complain, they shut the site down and open another one, almost identical but simply using a different site name. AltasCash is just another one of the many.

When you click any of the "tasks" in the Task Wall, you'll be directed to a different site, run by a third-party spam agency. One of them is "National Consumer Center", the name of which may sound very legitimate, but it's actually notorious for falsely offering gift cards of high-value in exchange for user's personal information. (If you google this company name, you'll find a lot of complaints.)

Just when you think you've "completed a task", you'll get another popup message that says something like "You must complete a Silver Deal before claiming your reward!" It may sound like the "reward" - gift card, game console, etc. - is already on the way to you, so you may feel obliged to complete it until the end. This will turn out to be another task and it will ask your full personal information all over again, which will be sold to another spammer. It's never-ending. Many users, predominantly teenage users, seem to be fooled simply by the shiny prizes, but none of them exists!

Why Won't They Pay?

So why don't AltasCash and other similar sites never pay a penny? The answer is simple; because they're not making enough money to pay. As I mentioned earlier, these scam sites are only affiliated with illegitimate advertising agencies. Every time you complete one of the "tasks" from the task wall and submit your personal information, AltasCash will receive a small affiliate commission from the agency - usually no more than $2. But they offer to pay you $30 every time you complete a task. How can they pay out $30 when the income is only $2? They can't. That's impossible!

In fact, the whole story that AltasCash is telling you is made up. It says that the money "generated from ad-spend revenue and sponsorship products is used" to pay the members. And on its homepage, some brand logos can be seen; Louis Philippe, DuPont, Hershey's and Medallia. As if AltasCash is doing some advertising work for these brands and generating a lot of revenue. Clearly not the case because if they did work together, they would at least display some form of evidence such as advertising banners and a copy of the publications, not just logos.

The "tasks" you are given are nothing to do with these brands, and what AltasCash asking you to share on social media is about AltasCash itself, not to promote these brands.

You see why none of this makes sense? As an AltasCash member, all you do is to answer some silly fake survey questions and share your referral link here & there on social media. You're not helping these brands in any way. Why would these brands, or any company pay AltasCash any money to pass it to you for nothing in return?

I hope you understand you never get "easy money" from AltasCash or any program/scheme online because nobody would pay easy money like that!

The "About" page (https://altascash.co/about-us) says that AltasCash was founded in 2015, but that's not true. The site was only created in July 2020 (the image below-left).

On the other hand, according to the terms page (https://altascash.co/terms), the contact information is shown as "Altascash, PTY, Melbourne, Australia; Attention: Customer Service." But of course, no such company name is found in the Australian company registration database. So this is totally fake - no company named AltasCash, PTY exists!

By now, you know everything that's being said in AltasCash site is pretty much untrue. But the photo of the "account manager" is fake. It's a photo of a Canadian actress, Shay Mitchell.

You Won't Get Paid Because You Don't Deserve It

If you've already "made" some money in your AltasCash account, you may be disappointed to learn that you'll never get any of it in your hands. But I wouldn't waste any more time trying to contact them if I were you. Because really, you haven't done anything to deserve that kind of money.

What it means is this - imagine you hunt the person behind AltasCash down, take them to the court and sue them. The judge and jury would estimate the value of work you've done and order them to pay you the cash equivalent. All you've done is simply sharing links on social media and answering some silly survey questions - a few cents. Not even dollars, you see what I mean?

Every day, millions of social users share links for free. There are some legitimate survey-for-cash sites, but they only pay cents per survey, extremely rarely over a dollar.

3 Ways To Earn Some "Real" Money

To earn some decent money is to put in effort into your work and to give value to whoever pays you. There are roughly 3 ways to earn some real money online;

If you don't have any skills to use, affiliate marketing will be the "easiest way" to start - not easy to make money, it takes time to take off just like any other business. At least you can sign up with an affiliate program and start promoting some products as you learn the technique.

If you're interested in building your own website and run your own affiliate marketing business, join me from the link below and take the first 10 lessons for free. See if this is the kind of career you want to pursue online. Sooner the better because in this current climate, everyone's trying to get on the "work-from-home" ladder! Any questions, don't hesitate to leave a comment below and ask. Good luck!

Bankruptcy Can Be Your New Beginning

Bankruptcy Can Be Your New Beginning

WAbinars To Learn How To Make Money Online

WAbinars To Learn How To Make Money Online