I mean, there is no such thing as a "push-button system". The sales video is a joke (literally) from beginning to end. But apart from the bad direction and screenplay, you can tell the owner invested a good amount of money hiring decent actors and film crew. It means he/she has been pretty successful in scamming thousands of users - Push Button System is one of the "Easykits.org" series, notorious for targeting get-rich-quick dreamers and selling them web tools that don't work on their own. Today my Push Button System review will explain why you shouldn't believe in this type of invitation and what you should do to move forward if you're really looking to make money online realistically.

What Is Push Button System?

The same scammer has been selling a series of online products by saying "you'll make thousands of dollars with only 15 minutes of work each day", "only a few clicks to set up", "I'll give you an account that's already making money every minute as we speak", etc. in the sales video.

Push Button System (PBS) is probably one of the worst because they got actors to "demonstrate" the magic in front of the camera. The owner approaches a random passerby on the street, lets him earn thousands of dollars with a push of a button in front of his eyes, and the guy is bamboozled "Wow! Huh...how?"

The conversation is so scripted it's painful to watch, but who am I to say this? I thought the Blair Witch Project was a real documentary, I was pissing myself watching it (it was 20 years ago, I was young and naïve ?) So there is a slight chance that the scene could dupe some people as dumb as I used to be. Especially at the beginning of the video, the seller boldly states, "No actors, no fake proofs, just real money generated in real-time." But the truth is, every single person who appears in the video is an actor, and every single "payment proof" is fake. 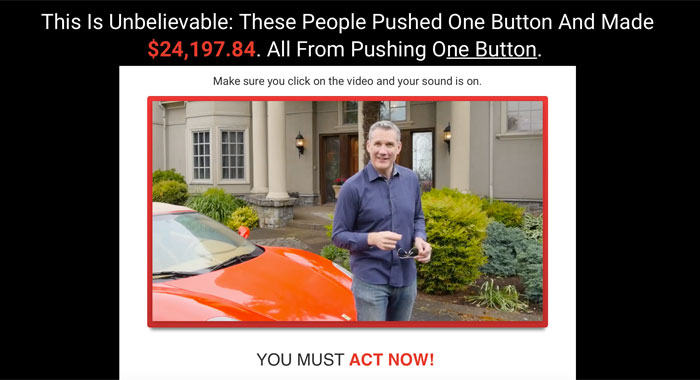 Well, without trying to exaggerate...it totally ignores what it is to live in modern society. It ignores the world economy as a whole. One of the (fake) users who appear to leave a testimonial says, she receives an amazing amount of money from PBS by "just pushing the button". But she doesn't intend to quit her job as a teacher because she loves what she does. As if PBS brings a total fantasy where money will become no object and work will stop becoming the way to earn a living, so you can do whatever you want.

The problem is of course, it never explains how it works, how it can be possible, and why it can be so ridiculously easy.

This scam product targets daydreamers who refuse to understand businesses - how people make money. I'm not saying we have to have knowledge of running an enterprise or becoming an executive trader, you see what I mean? I don't know any of that myself. I mean the very basics; what it is to earn money, who pays for it, and whether they're paying a fair price or not. If you work as a server in a restaurant, where does the money come from to pay your wages? The customers, right? Push Button System completely ignores "how" it makes money. But throughout the entire video, it keeps repeating like a parrot;

If someone told you that you could make $20,000 every day (that's what PBS seller says), you would immediately question "how" and "why";

Also if you were told that you'd barely have to work, then your immediate question should be;

If these questions don't cross your mind, then you'll be in trouble. How do you know that this "system" is not involving serious crimes such as money laundering and a criminal syndicate may be behind you to get you into trouble?

All played by actors.

No Such Job Is Left For Humans

If you can ask these questions to yourself, then your guess is absolutely right. Too good to be true, there is no such thing as a Push Button system, nothing works like that in the real world. That kind of crazy may have sold a little more a decade ago, but now that any "easy" jobs can be automated by developers, there's no reason why anybody should offer you a job that robot can do. Like just clicking, just copying & pasting, just pushing a button.

All Actors, All Fake Proofs

If you watch the video just a little carefully, you can tell that not only the front person ("Jay Brown" who claims to be the owner) but everyone who appears is an actor, from the way they speak and from the perfectly scripted conversations where nobody interrupts each other.

Payment proofs are all fake - particularly you may notice the two screenshots below; the left one is an account balance of the owner as he claims, and the right one is the random person he's transferred money out of nowhere "just by pushing a button". Both the account numbers mysteriously end with "3465" - not a coincidence, the seller couldn't be bothered to change it, I guess.

So have I actually bought Push Button System? No way. As soon as I saw the name "easykits.org" in its terms page (also the privacy policy page), I knew I'd be wasting my time and money, and I'm 100% confident that any products that are linked to EasyKits are scams.

Easykits.org was selling an e-commerce website template that wasn't usable unless at least hundreds of dollars were spent on extra. Users weren't told this before the purchase, but instead they were simply told that it was a magical "money-making website". The scammer keeps changing the product name such as "Money Sucking Website", "Website ATM" and so on, and "Push Button System" is just one of them.

By the way, this URL (support.easykits.org) has long been gone. The link is broken.

The Only "Legit" Products Are...

Firstly, never trust any products that claim to help you make money unless it explains how it works in plain English.

If someone claims to offer a "system" that makes money on autopilot without putting your effort, then that's a scam. Because think about it, if anyone could have such a thing, it could easily go viral across social media and everyone in the world would have had "free money" by now.

Some web tools such as lead generation software, graphic software may say it'll dramatically help you increase your sales, but you'll have to already know how to run your business and you'll also need to master how to integrate the software with your business.

So which ones are "legit" for a new starter?

If you're a brand newbie looking for ways to earn a solid income online, there's one thing you should always remember; the ONLY legitimate products that claim to help you start making money online are;

That's right, they should all be training programs. They may call it a system, method, "done-for-you platform" etc, but "done for you" doesn't mean you don't have to do anything apart from clicking a few buttons. The price may include a ready-made website and hosting, but you're mainly paying for a training course, help, and support.

Only pay your money if it clearly tells you what you're going to learn, and it seems feasible to you. Good luck!

Sendshark Review: Not Convinced By The Deliverability

Sendshark Review: Not Convinced By The Deliverability