The Prosperity Warrior / The Warrior Blueprint Review – I Don’t Have To Do ANYTHING?

Several identical sites are pointed to the same webinar page, The Prosperity Warrior, Warrior Blueprint, Warrior To Wealth… If you’ve already watched it, what do you think of it? I think this is the worst “webinar” I’ve ever seen. Well, it’s just a sales video, and there’s no “web seminar” element anywhere because there’s absolutely nothing you can learn from this video.

If you’ve been looking to find out what these “Wealth Warrior” programs are about, scroll down to read my review. I hope my opinion will help you decide whether this is of any use.

What Is The Prosperity Warrior / The Warrior Blueprint?

This program claims to send a check of $1.5k - over $10.5k direct to you daily. It’s about selling outdated PLR products, but “you don’t have to do anything because the system will do all the heavy lifting for you”, such as;

The joining fee starts from $3,247 but it doesn’t explain what it’s for. You are told that you’ll have a “success coach”, so assuming it’s a coaching fee. However, the seller doesn’t clarify why you need a coach, since you don’t have to do anything (?)

There are too many question marks as far as the “webinar” page is concerned. First, I’ll discuss various uncertain points I’ve found, and I’ll share my opinion in a little while. 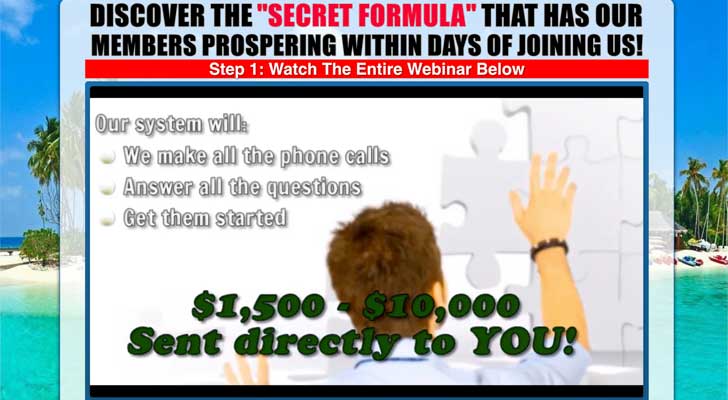 The Invitation Itself Is Unclear

As I mentioned at the beginning, the “webinar” is not a webinar because the video doesn’t provide any useful value to users. You won’t have to do any job but you’ll receive an extraordinary amount of money, directly from the Prosperity Warrior system. But you’ll have to pay a large amount of money in advance… But hold on, that’s exactly what an advance-fee scam is. I’m not saying this system is, but why is the seller promising such a huge income in exchange for an advance fee? And why would he need anyone (you) if his system is the one that does “all the heavy-lifting”?

The Site Is Very Old

Well, firstly, the video clips and other graphics displayed on the site are undeniably old. The text is WordArt-like from the 1990s. The resolution is so bad. Even my “digital camera” from the pre-smartphone era could create a video with a better resolution.

Also, none of the people who appear to leave a testimonial in the video mentions the name of the program (e.g. “The Prosperity Warrior”.) It means they’ve all been used elsewhere, all possibly a copy of copied clips.

Also the site keeps emphasizing how many bank checks can be delivered by courier services to your door. You can view some user testimonials where they show off their check in the envelope...but who uses checks nowadays? Why would you want your money received by check, rather than via wire transfer? Paying by check for any company is more time-consuming and costly. Considering this, I suspect that the program would have been created at least a decade ago.

This scheme seems to simply promote e-learning which I think is vague and unclear. I mean, the word “e-learning” itself is outdated, isn’t it? School and college e-learning programs aside, learning materials are everywhere online, free as well as paid.

PLR products (ebooks, audio, or video guides) are created anonymously and made available for anyone to resell, so the content quality is usually very low and over-stretched. The majority of them are “giveaway” quality or can be sold for a very low price.

But that’s my opinion on PLR products in general. What’s puzzling is that, all the products displayed on the Prosperity Warrior/Blueprint site are really so old and some of them are clearly useless in value. I’ve checked a couple of internet marketing-related products (you can get them for free elsewhere) but these guides refer to Google’s old algorithms, so it’s wrong information.

Another product that's listed is called “How To Set Up WordPress”, which was originally released in 2013. It’s absolute rubbish - WordPress has come a long way in the past 8 years, you don’t have to “set it up”! The idea of selling these products is like selling VHS video tapes...it doesn’t sound particularly good to me.

The “3 Steps” Are Unclear

The site says that the 3 steps Team System to make money is as follows;

It’s confusing to me because obviously, “You get paid!” is not a step, it’s a potential result of it. And once again, the system will generate leads for you and the coaches will do all the dirty work for you. So you’re not doing anything? These are the steps? Isn’t it too good to be true? 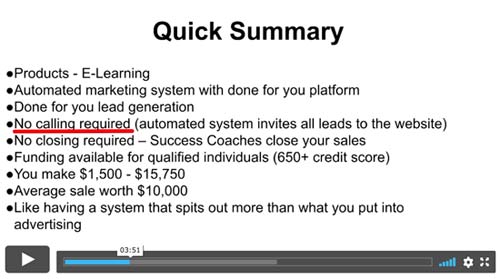 According to the Quick Summary, the done-for-you system will generate leads, so "no calling is required". But it doesn't say no advertisement is required. It also says you need to learn some marketing and analytical skills, but it doesn’t say what exactly.

I wonder if your actual job is advertising, which is one of the hardest and costly things to do. The DFY system may be a website, but you won't receive any leads just by publishing the site. You'll have to buy traffic to send visitors, which isn't easy, though you certainly won't have to speak to anyone on the telephone. But then if that was the case, this one of the biggest jobs would be missing from the 3 steps, mentioned above. It doesn't quite make sense.

The Joining Fees Are Unclear

With all that said, the level of joining fees implies that it is more than selling PLR products.

There are 4 different grades of joining fees, and which one to join will determine the level of your potential income;

First and foremost, the administration fee. Professionals such as lawyers often display their administration fees separately to be transparent about taxable/non-taxable charges. Otherwise, admin fees are included in every service fee or product price that buyers pay for, as we all know.

Charging such a specific amount separately without explaining what it's for sounds somewhat unfair to me. Also, the admin fee goes up proportionately against the level, which doesn’t make sense. If you pay $7,000 (“Platinum”) instead of $3,000 (“Gold”), what will it cost them more for? I couldn’t find a valid explanation anywhere on the site.

What's critical, possibly very wrong, is the difference in your immediate benefit between each grade.

What I mean is, you'll get an all-done-for-you system and your coach and stuff like that, right? Whatever you receive in return for the payment should be different in each grade. It has to be.

If the benefit every member receives upon joining (DFY system et al) is the same regardless of the grade, and the only difference is the potential commission as a result of a sale, then that'll be as close to a Ponzi scheme. Not illegal, but considered unethical.

The seller explains that every sale price will be split between you and your coach 50/50. We all know that nobody deserves such a large “reward” unless they put in a serious amount of effort. So I think it would be good if the Prosperity Warrior was a lot more transparent about the real worthy value of the fees you pay. Right now, I don't think it is.

The Funding Advice Is Harsh

It is a lot to pay. So the seller suggests some ways of financing. Well, we all agree that borrowing money to set up a business is a huge commitment. The safest bet for a new business owner is to take up a loan with their bank because without a proper business plan with a feasible ROI provision, the bank manager won't approve it.

But the Warrior system simply lists up possible ways to borrow money, including 401K - why would you wreck your pension contribution? I personally think that'd be a crazy idea. It also says "if you pay off in a few months, you'll end up only paying a fraction of interest." That's a pretty gangster kind of thing to say. Nobody tells anybody to borrow money from somebody else to pay them!

Anyway, I wouldn't even consider joining this scheme or any other "make money" scheme if I didn't have spare cash.

Is The Prosperity Warrior / Blueprint a Scam?

Well, first of all, think about an internship, where you build career experience while you work for an employer for little or no financial reward. With an internship opportunity;

Whereas with the Prosperity Warrior / The Warrior Blueprint;

An ordinary internship or the Warrior program, which one makes more sense and sounds trustworthy, and which one doesn’t?

I haven’t actually bought this program. The actual content may be fantastic, I never know the truth. But based on the content on the sales page, there’s no reason why I should be convinced. It’s predominantly focused on very unrealistic income claims, and it doesn't tell you what you’re actually supposed to do.

The Prosperity Warrior / The Warrior Blueprint Pros and Cons

A lot of money to pay for too many uncertainties. It explains well what you don't have to do (no selling, no inventories, no phone calls to make, not MLM, not network marketing...) but it doesn't explain what you have to do. I wouldn't gamble on a scheme like this one if I were you.