In the past few weeks, I've been invited to join OnPassive / GoFounders by several people. I knew about the scheme which I thought had been pulled out in April 2019. People were calling it a Ponzi scam, so I guessed that was what it was. But I've noticed now that the company - OnPassive LLC, registered in Orlando, FL - is still active, also noticed the site started blogging in October 2019, and it looks like it's actually planning to release a product. So it still exists, legitimately (on paper, at least). 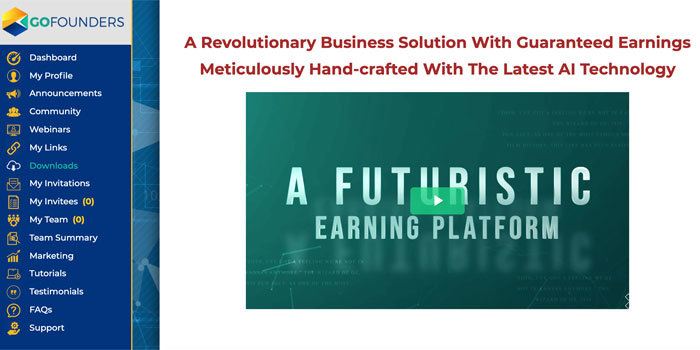 You know, if there was a web tool that I truly love, I wouldn't hesitate a second to promote it as an affiliate regardless of the commission rate. Whereas with a typical MLM, the primary focus is on the compensation plan, the secondary focus is motivational insights, and the least focused element is the actual product.

Considering most of the MLMs are Pyramid schemes (effectively), today in my OnPassive GoFounders review, I want to clear some of the fundamental questions. Why do they have to have two names - OnPassive and GoFounders - and what's the difference between the two? Why do things always have to be so complicated with an MLM? And mostly, what's the quality of the promotional campaigns and is it worth sparing your time and money on this?

What Are OnPassive and GoFounders?

OnPassive is an MLM scheme. It's planning to sell a web tool by the looks of it - I can only say "by the looks of it" for two reasons. Because it's not been officially released yet, (1) the projected price of it has never been mentioned and (2) We really don't know how useful the tool will be. I'll talk about it in a little while, but this is a typical MLM, where everyone talks with big, decorative words and no one really gets to the point (sorry, but true!)

Whereas GoFounders is a "back-office" website that's run by OnPassive. The site allows members to communicate with each other, with their team, watch webinar tutorials and download marketing publications.

It was named differently because it was initially decided that only the "founding" members should have access to the back-office before the official launch of OnPassive. However it's forever at the pre-launch stage, anyone who joins OnPassive will be part of GoFounders.

It requires a one-off payment of $97 to join. Once OnPassive is launched, they might close GoFounders to any new members - they're undecided just yet. But if they decide to open to it to new members, they'll increase the joining fee to $997, but the reason for such a steep price increase is not explained.

On top of that, you need to buy an affiliate package (starting at $25) to be able to receive referral commissions.

What Really Is The Product?

According to the publication released by J. Morlock and updated in 2019, OnPassive is a "system that's capable of handling millions and millions of members" but currently there are 51,000+ members. But OnPassive also has a product, which is a "revolutionary, stand-alone, a first-ever, life and lifestyle changing, an artificial intelligence-driven, set-it-and-forget-it smart business solution made up of a suite of products consisting of everything you could possibly need to run an online marketing business."

Does that make sense so far? Not to me, really. Not at all. He goes on to explain that the system consists of;

So it does sound like an all-in-one web and email marketing tool. Which part is performed by artificial intelligence is unclear. Simple tasks such as spam filters and chatbots are AI-assisted and already widely used, so it's interesting to see how this particular tool will stand out from the crowd.

The company is registered in Orlando, FL, and is still active according to the Florida Department of State's division of corporation site. According to BehindMLM.com, the founder Ash Mufareh expressed his decision to retire back in April 2019 ("Ash Mufareh pulls GoFounders OnPassive “workaholic” exit-scam"), but the registration document says that he still remains as the founder.

The affiliate compensation plan is made at 4-tier matrix - 4 different packages (initial cost of $25, $125, $250 or $500) and each package spans over 10 levels. Complexed as expected, and the payout rates are somewhat inconsistent. 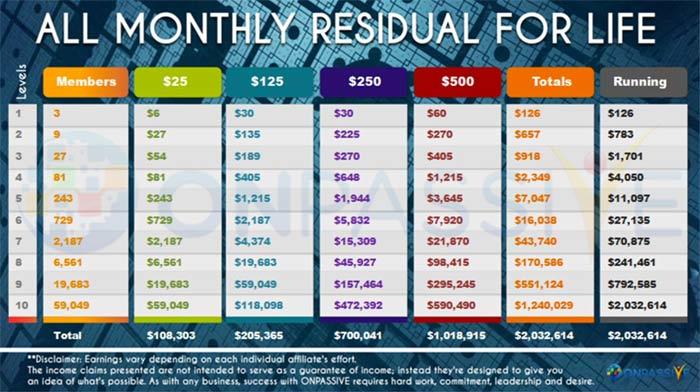 The above diagram is based on the scenario where you and every single person down the line recruit 3 people each. So if everyone down the line up to 10 levels recruited only ONE person each, the compensation plan would look like this;

Both the tables above just show each increment, so it's hard to see how much you can actually make. Perhaps the table below might look a little more comprehensive.

For example, if you have purchased a $125 affiliate package and have one direct referral, a chain of 7 referrals to follow one after another (8 levels down the line in total), all of them buys $125 package, the total commission you receive will be $62 *.

Of course, everyone would have their choice of package and the number of referrals they may manage to recruit would be different. So whatever way the diagram's drawn up, you can never estimate a realistic projected income. An MLM matrix for you! Unless you already have a good team of prospects, each of whom already has their own good prospects, building a team that consists of 8 levels will be pretty unrealistic. (My friend who has 12 years of MLM experience tells me that!) 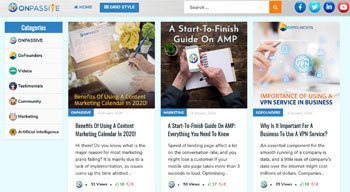 The blog is terribly confusing to me - a variety of topics that randomly cover online businesses and technology. Such as e-commerce, B2B marketing, Google analytics and SEO, VPN services, email marketing, content marketing, artificial intelligence vs customer experience, etc.

Each blog content is relatively short and contains very basic general guidance, but I guess the existing OnPassive members who have no previous experience will gain a little knowledge from it.

There are quite a few AI-related blog posts, but none of them actually makes sense - once again, big decorated words that are not getting to the point, such as "the NextGen plan for global AI dominance", "AI-driven model pinned across the drawing board of possibility". How the AI will actually be implemented to the OnPassive tool or how OnPassive users will be benefited from it is never mentioned.

What's My Opinion of OnPassive?

I can see from the blog posts that OnPassive has some friendly and enthusiastic members. Once you join, there may be a decent community that supports you and motivates you. However, it's grossly overhyped in my opinion. And from the fact that the pre-launching stage has been dragged on for so long, I can't help but suspect something's going wrong.

Why I Daren't Join OnPassive / GoFounders

The primary reason that I'm not interested to join OnPassive is that it's currently a Pyramid/Ponzi scheme without a product to sell. Affiliate marketing is all about solving problems with products or services. I wouldn't join or wouldn't recommend anyone to join a scheme where you see a return of investment by recruiting others for the sake of it.

But there's another reason and that's equally important, if not more. I cannot find terms & conditions, privacy policy, and refund policy pages. GoFounders' payment screen simply prompts you to enter your credit/debit card information (alternatively by money order or Bitcoin). A few people have invited me to join OnPassive / GoFounders, and they were friendly to me (that's all I can say), but without the presence of a clear refund policy, I just cannot take a risk making a commitment to something that could disappear tomorrow.

I've repeatedly said this in the past and I'm saying it again; whenever you make a payment to join a membership scheme, you should always ask "what the payment is for - what you will receive in return". You can ask yourself and research it yourself, or you can ask whoever's invited you to join.

If their answer is "You pay the fee now, but if you invite 2 people, your affiliate commission will cover your cost..." THEY ARE NOT ANSWERING YOUR QUESTION. What am I receiving for the payment in return? Web hosting service? Advertisement service? Training? And is the price fair?

It will cost you $97 to join OnPassive / GoFounder, but it's not clear how your $97 will be spent. All you receive is the right of access to the GoFounder platform, which you will not be immediately benefitted from.

I cannot recommend this scheme, as I find too many red flags, unfortunately.

What Is An Organic Search?

What Is An Organic Search?