“Do you want to make money online at home legally without investment? Don't think - Do it!” That’s what Classnovost.com says. It would be good if you could earn more than pocket money in a short period without any skills and no money to invest. Unfortunately, nothing’s as easy as that. If you’ve been looking for a Classnovost review to check the credibility of the site, whether it’s legit or scam, read on. What it offers is barely a job that any schoolchild can do. I think you already have the answer, but this post may help you justify your thoughts, not just on Classnovost but any other similar “high-paying” websites in general.

Classnovost.com opened in May 2021, appears to be a “get-paid-to” site with unrealistically high rates of rewards. It claims that you can earn an average of $111 per day, $777 per week.

Your main job as a user is to read a news article and answer 3 simple survey questions. Classnovost claims to pay $3.70 each time you complete it.

It also offers to pay $55 for each friend or social follower you invite, as well as 10% of all your friends’ income.

When your account balance has reached $777, you’ll be eligible to withdraw it. You can choose the payment option from Visa, Mastercard, PayPal, or Payza.

...That’s what Classnovost claims. If it sounds too good to be true, that’s because it is. Everything else we really want to know seems unclear and red signals are all across the site. Okay, I’ll now list up the things that don’t make sense, and you’ll see Classnovost is not a genuine site. 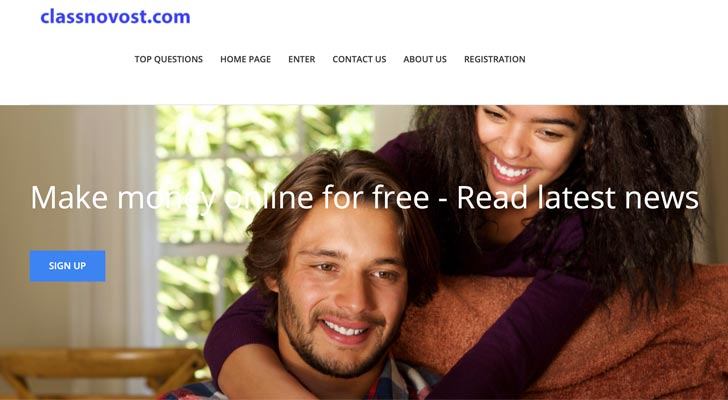 The Owner Is Unknown

First and foremost, no owner’s information is displayed anywhere on the site. The “About Us” section tells you something that’s irrelevant to them, such as “Are you interested in a stable income of $777?”

How can you ever believe anything that they say, when their identity is totally hidden? If it's supposed to be a paid-job opportunity, you want to know exactly who you'll be working for, don't you? This is like a stranger comes up to you on the street and says, “do you work and I’ll pay you in a few weeks’ time.” Of course, the stranger will never come back. So there's no reason why you should trust Classnovost even for this reason alone.

The Classnovost site does not display a privacy policy, terms & conditions, or doesn’t have any page that includes legal disclosures. It lets users sign up freely, without confirming how it treats users' private data (names and email addresses). This indicates that your information is most likely to be sold to third parties without consent, which is illegal.

Where Does The Money Come From?

How does Classnovost run its business? Does it make money enough to pay you? You can see some CPA ads by Google (Adsense) but that won't be enough to pay the users. You would think that Classnovost is working as an advertising platform where the news sites can reward you for reading their article and sharing your opinion through surveys. But that's not the case because no news is actually there! (See below.) Anyway, no indication of business information anywhere on the site, which means Classnovost is not running a business as such. 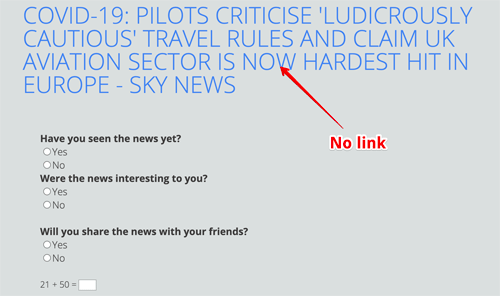 So the news articles are not actually there - all the headlines are listed, but the actual content is nowhere to be seen. You don't have to read anything, and answer 3 x ridiculously simple questions;

Classnovost also claims to pay you $55 for referring your friend each time, which is far too unrealistic. You could invite your 10 x imaginary friends (=yourself!) because there are no terms of service that prevent it. If you get 10 friends to sign up with Classnovost and receive $550 - who on earth in this world offers you such a lot of cash? Remember, it's not a cashback. You're not spending any money, you or your friends are contributing anything meaningful, and you'll still get such an amazing reward for nothing? Of course not!

And You'll Never Get Paid!

A number of users have reported to Trustpilot, explaining how Classnovost is deceiving them. It promises to pay out when you've earned at least $777, but when you actually become eligible and request for a payout, it'll turn around and either ignore your request completely or tell you to carry on referring more friends. Simples!

So What's Classnovost Really About?

Classnovost.com is most likely to be making money by selling your login data (name and email address) to third-party spammers. Without disclosing a statement that protects users' private data, that's presumably the case. Not only will you never make a single cent with Classnovost, but you may start receiving spam emails from companies or individuals that you've never heard of, sooner or later.

Deceiving users this way is bad enough, but it's also useless from a marketing point of view. Because the leads that Classnovost collects this way are looking for ways to receive free cash, not to spend any money in the first place. It means the traffic Classnovost distributes is unlikely to create a purchase cycle. In other words, the traffic originated from Classnovost may be useless for end-users.

The users who have complained on Trustpilot are calling it a scam, and I think it deserves to be called so since the intent is nothing but deceitful. But at least it's free to join, you won't be losing your money, the only thing you'll be losing is your time. The worst that can happen to you is that your spam mail folder will be filled with low-quality promotional emails.

But there's a far more important thing for you to remember. There are many reward sites, GPT (get-paid-to) sites out there, but none of them pays decent rates. They're open to anyone worldwide, everyone has an equal chance to earn, which means they can only provide extremely easy tasks such as taking surveys and watching videos for a few cents. Just like you don't trust anyone online, they don't trust you either. Legitimate reward sites are not designed to pay.

So why do some reward sites like Classnovost.com offer so much money? $3.70 just for clicking yes/no? Because they're fake!

If you're seriously looking to receive full-time equivalent money online, then don't look for "free reward sites" - legit ones never let you earn decent money, and fake ones tell you they pay, but they never pay a penny.

If you want to work from home but don't think you have any skills to sell or don't know where to start - affiliate marketing is certainly a legitimate business model that allows anyone to try. It's a way to promote brand products on your platform (e.g. your website) and receive a commission from the brand each time a sale is made. You don't have to speak to anyone, certainly not to hard-sell.

It's a pretty competitive industry because anyone could join in and start right away. Equally, so many people give up after a few months because they either don't know where to learn the basics or they try to carry on without a willingness to learn the techniques.

The first thing you should do is to sign up from the link below and receive the first 10 very basic training for free. This is the platform I've learned almost all the techniques, and 6 years on, I'm still sticking to it for many reasons such as web security, the trustworthiness of the community, and a free SEO tool that comes with it. Any questions, don't hesitate to leave a message below. Good luck!