WordPress Bebo or Thrive Architect - many of us speculated for months prior to the new version 5.0 release of WordPress, code named Gutenberg, now officially named "Bebo". The content would be 'added in blocks', which sounded like it was going to catch up with drag & drop visual editors that Thrive, Elementor and Divi offer. It would also be adding features that were not previously available - especially Table, Columns and Button features. Well overdue. Does it mean Bebo vs Thrive Architect will clash each other? Will Bebo make the Architect plugin less attractive, less needed, or worse still, unusable? 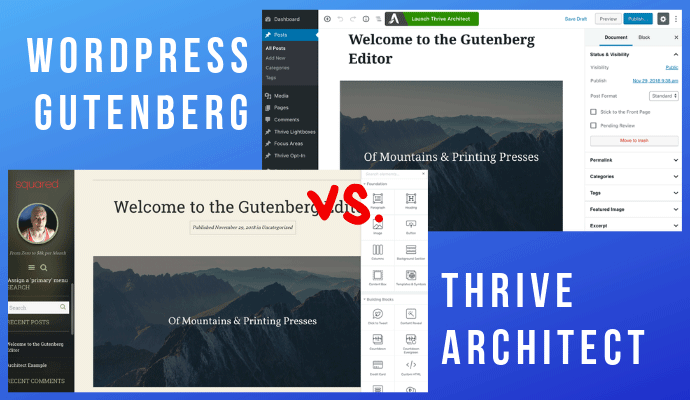 The number of features and variety options that Thrive Architect already provides is far greater than that of Bebo's. After all, 'simplicity' has always been the best at WordPress, and it's the user friendliness that's made it the most popular blog management system. Keep it simple or users might leave.

Years ago, WordPress was criticized for the lack of some features such as column/table. Despite of that, it successfully became the mainstream. Just compose from top to bottom. We're no longer using tables. Insert html code or use a plugin at your own terms if you wish, simples!

So this 'simplicity is the best' approach hasn't changed. Bebo allows you to add quite a few fancy components, but keep the options minimum. If you want your website to stand out from the crowd and focus on more conversions, you will want Thrive Architect to make the difference.

I personally think Bebo is great. And everyone's going to user it eventually, so this is fabulous. Bebo's beta version has had some serious fundamental issues such as sluggish behavior and even worse, slowing the whole site down. These need to be fixed, of course. But most of other complaints made by the existing WordPress users are based on the 'change' - people don't like changes. "Now we have to click + to open up a box!" "Is this really necessary!?" They'll soon get over it for sure.

Really, there are some remarkable new features that Gutenberg offers (all of which are also available in Thrive Architect) such as;

Had the conventional WordPress editor been my only blogging platform, I would have been ecstatic to be able to use these features. If you don't want any of that, and all you do is to write words and slap a couple of images in your post - that's pretty much of what I do too. Just bear in mind that these elements would make your readers more responsive. Place a button instead of placing a hyperlink on text ("Click Here >>>"), and more people will react to it.

Now if you like these features, I'll show you how much more Thrive Architect allows you to do.

Gutenberg offers 3 x button variations; rounded, squared, or outline. You can change the color of the button and text to any color you want. But you cannot change the size, or change the background color;

While Thrive Architect offers 8 x default variations, fully customizable. Not only can you use any color, any font or have it in any size, you can also have it animated, add a shadow, have it in a color gradient or add any icon (choice from thousands of icons).

(This is a slanted edge background by Thrive Architect.)

Thrive button with any icon

What Thrive Can Do But Bebo Can't

I know some of you might think "I don't need all that fancy stuff. It's the content that counts, not the design". Yes, you can say that. But there's so much more you can enjoy with these extra features that Thrive Architect brings out. And remember, Thrive is suitable for anyone who wishes to convert - generate more leads and make more sales. So there are some crucial elements that Thrive has but Gutenberg doesn't. Means you would have to install a new plugin every time you need something, while Thrive Architect has them all in one plugin. These are elements such as;

What has no body and no nose?

What can't be burned in fire, nor drowned in water?

Any of these elements can be customized and saved as a template for future use. As far as the versatility is concerned, Thrive Architect is by miles better than just a simple WordPress Bebo editor. The good news is - once you are used to the "block editing" experience with Bebo, it'll be extremely easy for you to adopt the Architect editor, too.

The Kibo Code Review – What’s Unique About It?