I was one of the unlucky participants in Traffic Monsoon. Joined in early July 2016, "invested" $550 and three weeks later the site was shut down. I was planning to write my own "How To Make Money With Traffic Monsoon" review. It turned out "I too, lost out to Traffic Monsoon". To me $550 loss was relatively small, but in retrospect I think I did take a risky gamble and I've learned a lesson from it. Here are my thoughts and the latest Traffic Monsoon news. Will we get our money back? 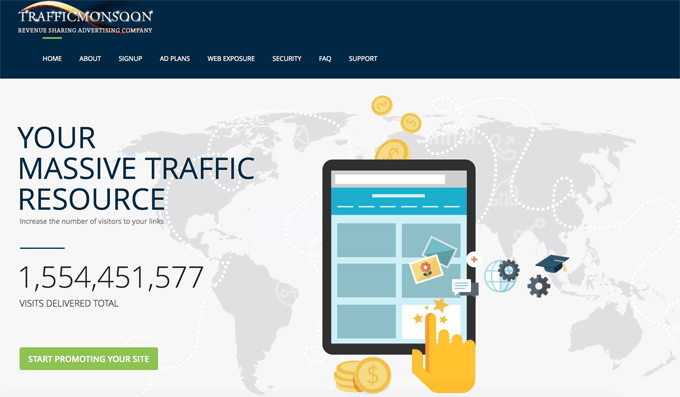 I was intrigued by the ambiguity of the business. Traffic Monsoon stated it was providing a traffic exchange / advertising service. It said the money that members contributed was not an investment. The T&C clearly stated that. It was not a money-making scheme, yet many online network marketers were making serious money from it. They were using Traffic Monsoon to make money, hardly ever in order to advertise their businesses...

...That would be a business "objectives and activities mismatch". Would that be allowed? I know it would be considered ethically incorrect in the UK/EU. Would that be okay in the US? The least likely if it was a public company, but Traffic Monsoon was not.

Generally make-money-online schemes that loved by network marketers can be hated by content marketers. Traffic Monsoon was not an exception, very popular among "scam buster" reviewers. You are told you can earn money with Traffic Monsoon. But you must pay some money in first, and don't see the return quick enough, so you call it a scam... Then how are some people actually making money? What's the truth?

It takes one to know one. I wanted to join myself, spend money and write my own unbiased review...oh well, whatever!​

As of July 26th 2016, an investigation and complaint were filed against the company and the founder Charles Scoville by Securities and Exchange Commission (SEC). The site's now been shut down and the company has gone into receivership.

Dorsey & Whitney LLP was appointed as the receiver, and the updates as well as the court documents can be viewed at the receivership website here. ​

The court document can be downloaded from here. The complaint is basically about;

​Charles Scoville seems like a nice man, seems like he's "caring about" his business and customers but he continues to avoid the "objectives and activities mismatch" issue.

It's like running a tobacco shop without a licence and say "I'm not running a shop, this is an exhibition space. I charge my visitors an admission fee and give them cigarettes for free."

It's like a movie theatre that forces you to buy a tub of popcorn for $30, but pays you money at the exit if you've managed to watch the same movie repeatedly for 24 hours​. Is it a theatre or popcorn parlour?

I'm not criticising how the business was run. Certainly "legit or scam?" was never my intention. As I've already mentioned I was only curious as to how some members were making serious money. Now Ponzi claim has officially been made against it, and it is up to the court to make all the judgements.​

Traffic Monsoon News - Will We Get Our Money Back?

The receivership website I've mentioned above also has a FAQ page. To be fair, it just tells you that nothing can be confirmed right now. The court has entered a "temporary restraining order and order freezing assets". Meaning the funds are frozen until the court authorises to release. How long it will take to resolve or how much will be refunded to the investors are unknown at this time.

If you've lost your money to Traffic Monsoon and are seeking for a solution, read the FAQ page first, and email trafficmonsoon.receiver.inquiries@dorsey.com. I have sent mine and they kindly responded two days later, saying almost everything is too early to tell (as of late August 2016).

I look forward to hearing the outcome in due course, and if I get some money back, that'll be a plus.